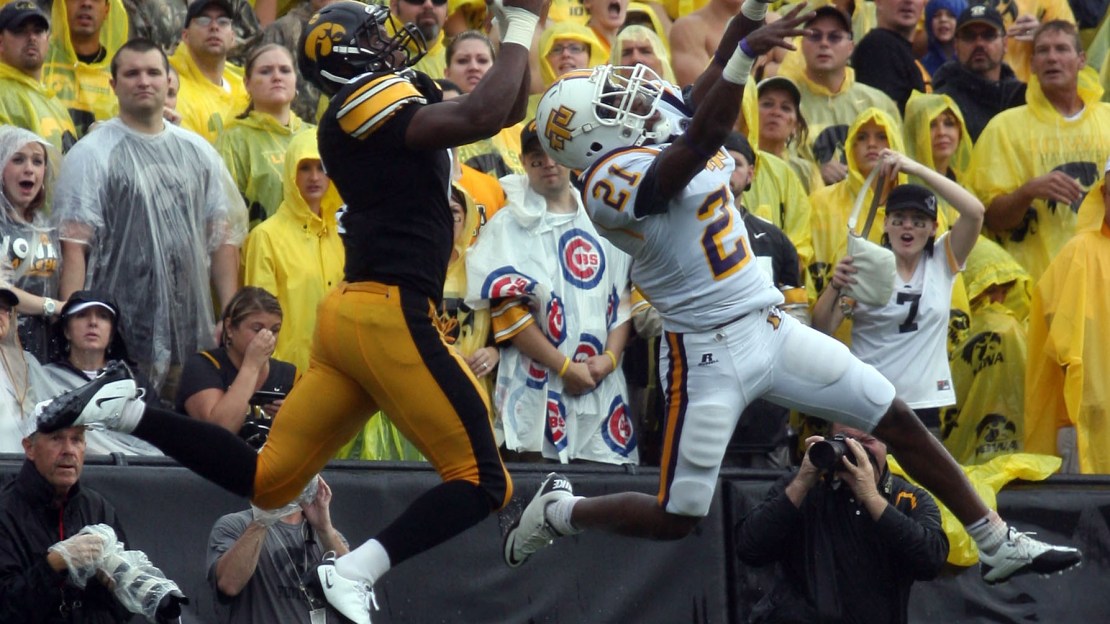 (AP) James Vandenberg threw for 219 yards and a pair of touchdowns to Marvin McNutt and Iowa opened its season by pounding Tennessee Tech 34-7 Saturday in the schools' season opener. McNutt had 140 yards receiving for the Hawkeyes, who won their 11th straight home opener despite an 84-minute delay because of lightning. Iowa overwhelmed the Golden Eagles of the FCS with 24 points in the second quarter. McNutt took a Vandenberg pass 88 yards for a touchdown, and Shaun Prater returned an interception 89 yards for a TD late in the first half to put the Hawkeyes ahead 27-0. Read the full AP recap, check out the box score and see the Big Ten scoreboard.

FINAL: Marvin McNutt caught six passes for 142 yards and two touchdowns, helping Iowa to a 34-7 victory over Tennessee Tech on Saturday at Kinnick Stadium. The Hawkeyes' passing game looked unstoppable at times against the Golden Eagles' defense. Iowa's air attack couldn't be contained, as it torched Tennessee Tech for 243 yards and two touchdowns. The Hawkeyes' explosive offense used big plays to take down the Golden Eagles. Tennessee Tech's defense gave up four plays of at least 20 yards. With 8:00 to go in the second quarter, James Vandenberg hit McNutt with an 88 yard touchdown pass, Iowa's longest play on the day. The score gave the Hawkeyes a 16-0 lead.

Iowa's Vandenberg went 13 of 21 through the air for a total of 216 yards. Vandenberg finished the game with two touchdowns and no interceptions. Tre Lamb threw for 127 yards while completing 14 of 24 passes for the Golden Eagles. He also threw two interceptions. Tim Benford was a key target for Lamb. He hauled in seven catches for 60 yards. Tennessee Tech racked up 306 total yards, including 156 yards passing while completing 17 of 28 attempts. The Golden Eagles' rushing attack also contributed 150 yards to the total, with the tally coming on 45 carries.

FOURTH QUARTER: Iowa ended its dominating performance with a powerful fourth quarter and capped off a 34-7 victory over Tennessee Tech. The Golden Eagles capped off a 76-yard drive when Dontey Gay ran one yard to paydirt to make the score 34-7. Tennessee Tech kept the ball on the ground during the drive, throwing only four passes. The Golden Eagles' Gay went over 100 yards rushing for the game in the quarter, he finished with 107 yards rushing.

THIRD QUARTER: Following a lengthy lightning delay, Iowa looks to be in control of the game as it leads 34-0 at the end of the third quarter. The Hawkeyes added to their advantage when James Vandenberg threw a 20-yard touchdown pass to Marvin McNutt capping off a 10-play, 80-yard drive to give Iowa a 34-0 lead. The Hawkeyes' Vandenberg went over 200 yards passing for the game in the quarter, he now has 216 yards passing in the game. Tennessee Tech will start the fourth quarter with possession on Iowa's 39-yard line.

SECOND QUARTER: Iowa scored 24 points thanks to two long plays and the Hawkeyes now lead 27-0. Iowa expanded its lead to 10-0 thanks to 12-play 58-yard drive that ended when James Vandenberg turned a handoff into a one-yard touchdown. The Hawkeyes made their lead 17-0 when Vandenberg tossed a 88-yard touchdown to Marvin McNutt on the last play of a five-play, 83-yard drive. Iowa opened up a 20-0 lead after Mike Meyer made a 19-yard field goal to end a six-play, 42-yard drive. Iowa made the score 27-0 when Shaun Prater intercepted Tre Lamb's pass and returned it for a touchdown. The Hawkeyes' McNutt went over 100 yards receiving for the game in the quarter, he now has 121 yards receiving in the game. Tennessee Tech is set to receive to start the second half.

FIRST QUARTER: Tennessee Tech is hanging with Iowa, trailing just 3-0 at the end of the first. The Hawkeyes started the scoring off when Mike Meyer kicked a 38-yard field goal to cap off a 15-play 58-yard drive, which gave Iowa a 3-0 lead. Pass plays were an afterthought for the Hawkeyes, as Iowa threw just three passes. The Golden Eagles will start the second quarter with the ball on their 12-yard line.