Step Into My Office: Coach Dantonio 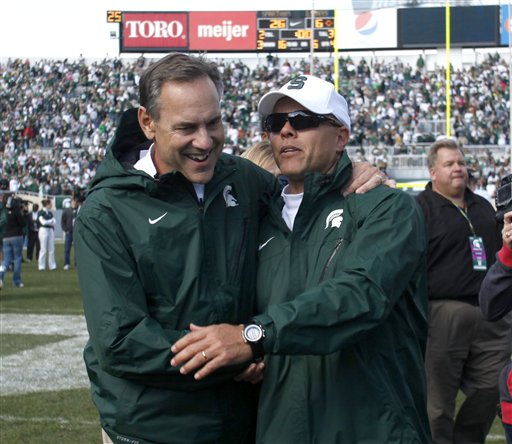 This season, BTN rolls out a new show called Step Into My Office, as Mike Hall sits down with football coaches for some really interesting chats. Catch the series debut right now on BTN. Mike passes along this bonus clip and a quick story in expectation of the first "Step Into My Office" with Michigan State's Mark Dantonio.

"Mark Dantonio may have the calmest on camera presence of our interviewees. But that doesn?t mean he isn?t interesting. He wins you over in a confident, patient, fatherly way. I didn?t want to dwell too long on the heart attack story with Mark, but it was an important enough event in his life to at least touch on and hopefully shed some new light on. However, one thing we didn?t get to keep in the final show was what happened two games after his heart attack against Wisconsin."

"He was still in the hospital watching the game on TV.  He?s on the phone with MSU staffer Brad Salem. Salem asks what Mark would do in this type of situation- go for it on 4th down? Mark replies that he?s in a hospital watching a Dodge truck commercial at the moment, what was Brad talking about?  He then hears screaming in his ear. ?Touchdown! Touchdown!? Mark didn?t realize there was a delay on the TV feed, but not on his phone, so he?s watching a truck bounce around while something big was happening live over on the field."