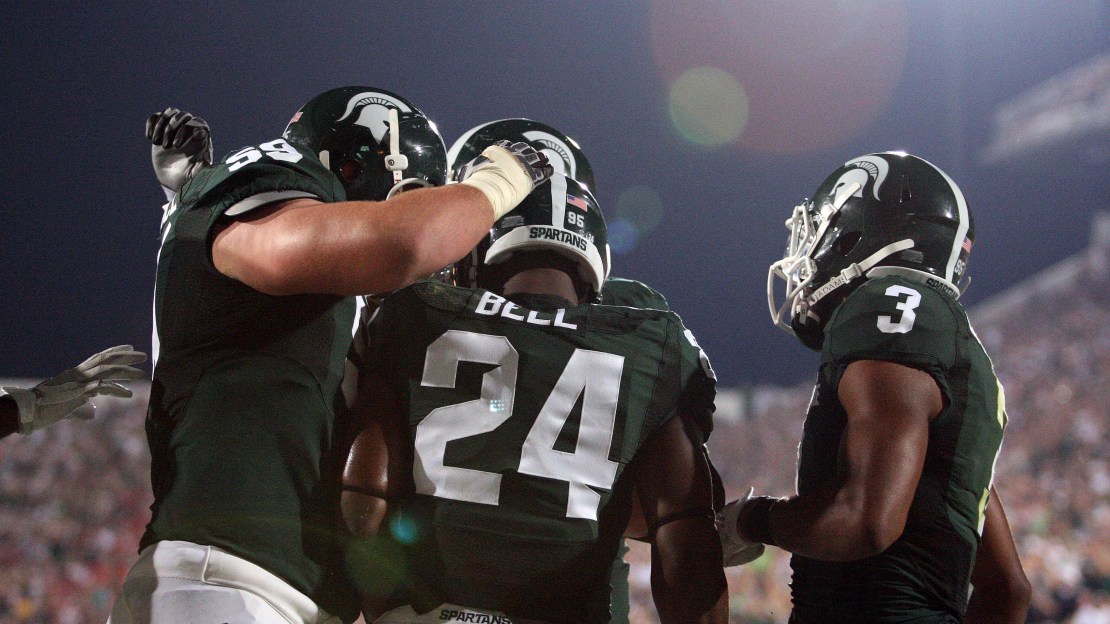 (AP)B.J. Cunningham caught nine passes for 130 yards and a touchdown, moving into a tie for first on Michigan State's career receptions list in the No. 17 Spartans' 28-6 victory over Youngstown State on Friday night. Kirk Cousins threw for 222 yards for Michigan State, which tied for the Big Ten title last season but wasn't especially dominant against the Penguins of the Football Championship Subdivision. The Spartans led 14-6 in the third quarter when Cousins threw an 18-yard touchdown pass to Cunningham. Read the full AP story, scroll through the box score and check out the full Big Ten scoreboard.

FINAL: B.J. Cunningham and Le'Veon Bell teamed up to lead Michigan State to a 28-6 victory over Youngstown State on Friday at Spartan Stadium. Cunningham caught nine passes for 129 yards and a touchdown and Bell added nine carries for 40 yards and two touchdowns on the ground. The Spartans' passing game looked flawless, despite the efforts of the Penguins' secondary. Michigan State's air attack couldn't be contained, as it torched Youngstown State for 237 yards and one touchdown. Kirk Cousins completed 18 of 22 passes for the Spartans. He threw one touchdown. The Penguins' Kurt Hess went 17 of 35 through the air for a total of 126 yards. Hess finished the game with one touchdown and one interception. Hess' favorite target on the day was Christian Bryan. He hauled in six catches for 45 yards. Youngstown State racked up 254 total yards. In addition to Hess' efforts through the air, the Penguins also rushed 34 times for 128 yards.

THIRD QUARTER: Michigan State's front seven stepped up in the third quarter, allowing Youngstown State to gain just 17 rushing yards and the Spartans now lead 21-6. Michigan State opened up a 21-6 lead after Kirk Cousins threw an 18-yard touchdown pass to B.J. Cunningham to end a 13-play, 75-yard drive. The Spartans' Cunningham went over 100 yards receiving for the game in the quarter, he now has 121 yards receiving in the game. Michigan State has possession on its 28-yard line to start the fourth quarter.

SECOND QUARTER: The expected blowout hasn't materialized yet, and Youngstown State is hanging tough with Michigan State, down 14-6 at the end of the second quarter. Three big plays, including a 55-yard pass from Kirk Cousins to B.J. Cunningham, sparked the Spartans in the quarter. Michigan State took the game's first lead after Larry Caper turned a handoff into a six-yard touchdown on the last play of a 10-play, 80-yard drive to give the Spartans a 7-0 advantage. A 62-yard drive that ended when Kurt Hess tossed a 10-yard touchdown to Jelani Berassa helped the Penguins narrow the deficit to 7-6. Michigan State expanded its lead to 14-6 thanks to six-play 74-yard drive that ended when Le'Veon Bell ran three yards to paydirt. The Spartans will start the second half with the ball.