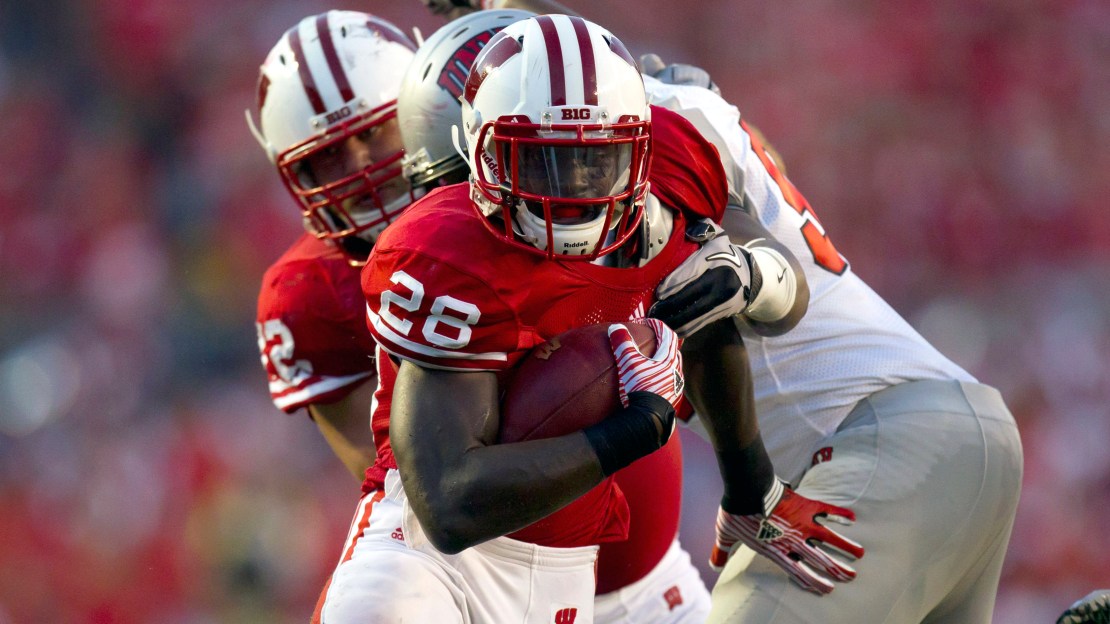 Russell Wilson lived up to the hype and made all the offseason talk about him seem worthwhile. The much-talked-about former North Carolina State star led the Badgers on six scoring drives in the first half, including five touchdowns, en route to an easy 51-17 victory over UNLV on Thursday night at Camp Randall Stadium. Wilson did it with his arm (255 yards, 2 TDs) and his legs (62 yards, 1 TD), while Montee Ball scored four touchdowns for the third straight regular-season game, dating back to last year, and added 130 total yards. Read the recap, scroll through the box score, and bookmark our brand new B1G football scoreboard.

FINAL: Wisconsin jumped out to an early lead and never looked back in a 51-17 win over UNLV on Thursday at Camp Randall Stadium. The Badgers scored 20 points in the first quarter on a Russell Wilson touchdown pass, a Montee Ball touchdown run and a James White touchdown run. Wisconsin's offense dominated the Rebels' defense. The Badgers racked up 499 total yards in the game including 258 yards passing and 251 yards on the ground. Ball ran for 63 yards and three touchdowns for the Badgers. He also caught two passes for 67 yards and a touchdown. Wilson completed 10-of-13 passes for 255 for Wisconsin. He threw two touchdowns and no interceptions. Caleb Herring threw for 146 yards on 18-of-27 passing. Herring tossed two touchdowns and no interceptions. UNLV had 292 total yards. In addition to Herring's efforts through the air, the running game also contributed 146 yards for the Rebels.

THIRD QUARTER: Wisconsin appears to be in the driver's seat en route to a win, as it leads  51-10 after the third quarter. Wisconsin added to its lead when Russell Wilson found Jacob Pedersen for an eight-yard touchdown to make the score 44-3. The Badgers started the drive at UNLV's 28-yard line thanks to a Jared Abbrederis punt return. A one-yard touchdown run by Montee Ball capped off a two-play, 42-yard drive and extended Wisconsin's lead to 51-3. The drive took 42 seconds. The key play on the drive was a 41-yard pass from Wilson to Bradie Ewing. A punt return gave the Badgers good starting field position at UNLV's 42-yard line. A 69-yard drive that ended when Caleb Herring found Phillip Payne from six yards out helped UNLV narrow the deficit to 51-10. The Rebels threw just three passes on the drive. UNLV will start the fourth quarter with the ball at the 41-yard line.

SECOND QUARTER: Wisconsin looks to be in control of the game as it leads 34-3 at the end of the second quarter. Wisconsin expanded its lead to 27-0 when Montee Ball ran for a one-yard touchdown to finish a four-play, 65-yard drive. The key play on the drive was a 63-yard pass from Russell Wilson to Ball. UNLV closed the gap to 27-3 when Nolan Kohorst finished off the 12-play, 64-yard drive with a 37-yard field goal. Russell Wilson ran for a 46-yard touchdown to extend Wisconsin's lead to 34-3. The Badgers scored in 31 seconds. Wisconsin extended its lead to 34-3 when Kyle French kicked a 29-yard field goal to cap a two-play 47-yard drive. The Badgers scored with no time remaining in the quarter. The Rebels will get the ball to start the second half.