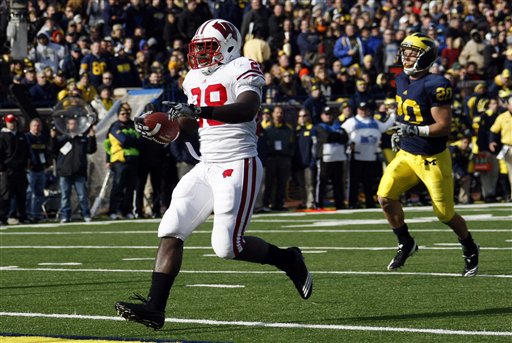 Every week during the college football season, Brent Yarina posts his latest Big Ten Power Rankings. With the season kicking off Thursday — Wisconsin hosts UNLV in the Big Ten's lone game on opening night — he figured it's time to unveil his Week 1 edition. As a reminder, these rankings are not meant to mimic the Big Ten standings. What fun would that be? They aren?t scientific, either. They?re simply Brent's thoughts on where each Big Ten team stands after its latest game and entering its next contest. Agree? Disagree? Tweet him: @BTNBrentYarina.

1. Wisconsin – We all know the Badgers lost a lot of talent from last season's Rose Bowl team, but they return plenty of playmakers and also add former North Carolina State star quarterback Russell Wilson, who will give the already prolific Wisconsin offense a dynamic it has never had.

2. Nebraska – While the defense will be one of the Big Ten's elite, it's the offense that will determine the Huskers' fate this season. If Taylor Martinez and company can adjust to life in the Big Ten, Nebraska will be in the thick of the title race all season.

3. Michigan State – No Big Ten team returns as much talent at the skill positions as the Spartans. Kirk Cousins has weapons all over the field, however it will be very interesting to see how the defense responds to losing star linebackers Greg Jones and Eric Gordon.

4. Iowa – For whatever reason, Iowa tends to have its best seasons when it flies under the radar. The Hawkeyes aren't expected to do a whole lot this season, and with the young talent they have on both sides of the ball, don't be surprised if they reel off another surprising season.

5. Ohio State – There's distractions, suspensions and a new coach, all of which will affect the team in Columbus, but remember this team is Ohio State and it always seems to reload with relative ease.

6. Illinois – Nathan Scheelhaase was one of the Big Ten's best quarterbacks down the stretch last year, and he's only a  sophomore. The quarterback added size and weight over the offseason and coaches said he's completed near 80 percent of his passes during fall camp.

7. Penn State – Regardless of who the quarterback is in Happy Valley, the Nittany Lions need their defense to recover from last season's struggles, when it allowed an un-Penn-State-like 23.7 points per game and tallied only 17 sacks.

8. Northwestern – We saw how valuable Dan Persa was to the Wildcats when he went down with the season-ending Achilles' injury last year, so without seeing the star quarterback in game action since the injury, it's tough to judge Northwestern.

9. Michigan – Denard Robinson is back, as well as a nice collection of receivers, but Michigan still doesn't have a proven running back — it will be running a pro-style offense this year — and it returns the Big Ten's worst defense (35.2 points per game), Greg Mattison or not.

10. Purdue – As long as the Boilermakers can avoid a second consecutive injury-plagued season (QB Rob Henry already suffered a torn ACL in his right knee), they have the pieces, from Kawann Short to Ricardo Allen to Ralph Bolden, to be far more competitive.

11. Minnesota – MarQueis Gray figures to be one of the more interesting Big Ten players to watch this season. The quarterback-turned-receiver-turned-quarterback finally gets his shot under center with four-year starter Adam Weber out of eligibility. But Gray, like the rest of the Gophers, have plenty of questions to address.

12. Indiana – Ben Chappell is going to be missed a lot more than people think. With him, the Hoosiers featured an offense that could overcome their poor defense on days they played inferior or equal teams. Without him, the offense could struggle to keep pace, placing even more pressure on the unproven defense.