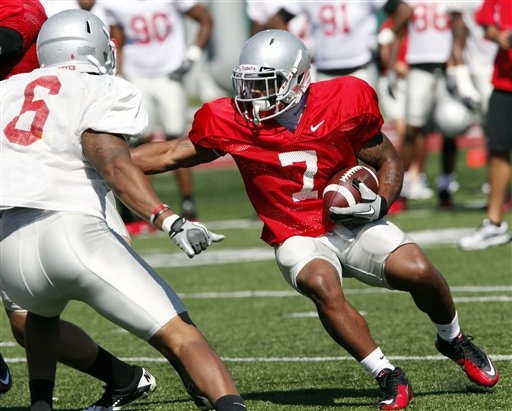 Football season is here, and that means it?s time to shift our focus to the Week 1 slate. Every Big Ten school is in action in the opening week, starting with reigning co-Big Ten champ Wisconsin hosting UNLV on Thursday night and finishing up with Indiana entertaining Ball State on Saturday night. That said, it's time to kick off my weekly Big Ten Football Previews. Here?s your Week 1 addition:

UNLV vs. Wisconsin
Time: 8 p.m. ET
TV: ESPN, ESPN3
Stat: Montee Ball?s 14 rushing touchdowns in Big Ten play were the most by a Badger since Ron Dayne had 14 in his 1999 Heisman season.
Prediction: Wisconsin 51, UNLV 14

*All stats are courtesy of our @BTNStatsGuy

Game of the Week: Northwestern at Boston College - One of two opening-week games between BCS foes and the only one featuring two bowl teams from a season ago, the Wildcats and Eagles should give us the most competitive and entertaining game of the first week. Each team won seven games last season, but both could have had more if it weren?t for serious injuries to star players. Northwestern, of course, lost quarterback Dan Persa to a season-ending Achilles? injury, and went on to lose all three games without him. BC lost standout running back Montell Harris before the season finale and finished 1-1. Both players make their much-awaited return Saturday, and the game might be decided by which one plays better.

Player of the Week: Marcus Coker, Iowa - While Iowa fans were very familiar with Coker well before his coming out party in the Insight Bowl, the rest of the Big Ten didn???t know much about the reserve running back. Two-hundered-and-nineteen rushing yards later, Coker is a household name. And the running back should receive a heavy workload against Tennessee Tech, which allowed 199 rushing yards per game last season, seeing as how quarterback James Vandenberg will be making just his third career start.

Team of the Week: Ohio State - A win over lowly Akron isn?t going to erase all the distractions around the Ohio State football program, but it can?t hurt. An easy opening win should give Buckeye backers more faith in interim coach Luke Fickell and his team, which is playing shorthanded for the first five games due to suspensions. Point is, people will feel a lot better about Ohio State and its product come late  Saturday afternoon.

Upset alert: Ball State vs. Indiana - It?s never easy making this pick during the nonconference slate, but if I have to choose a Big Ten team to suffer an unexpected loss, it would be the Hoosiers. Indiana has won at least its first two games every year since 2003, but it has a new coach, a new quarterback and will face an instate foe, one that beat them in 2008 at Memorial Stadium.