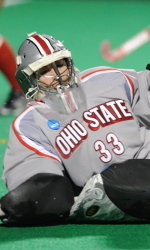 The Big Ten is no stranger to having itself all over the national field hockey poll. The 2011 season should be no exception — at least according to the NFHCA Preseason Poll. Four Big Ten teams land in the initial poll, led by No. 6 Ohio State.

Penn State and Ohio State both fall in the top 10, at No. 8 and 9, respectively, while Michigan State, No. 13, rounds out the Big Ten field. Northwestern, Iowa and Indiana are receiving votes.

Here's a rankings story from OhioStateBuckeyes.com:

"The Ohio State field hockey team is No. 6 in the Kookaburra/NFHCA Division I Preseason Poll, released Tuesday by the National Field Hockey Coaches Association. Maryland enters the year ranked No. 1 with 32 first-place votes after winning the national title last season.

Get more Big Ten field hockey news throughout the season from BigTen.org.