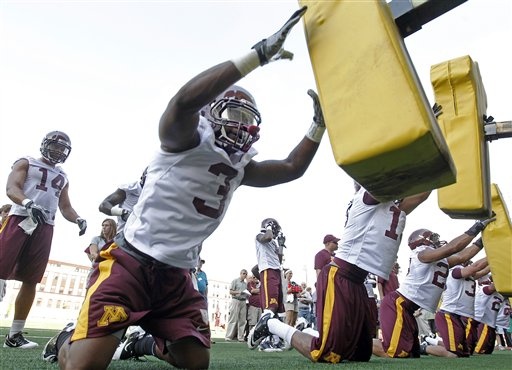 Dave Revsine, Gerry DiNardo and Howard Griffith took in Minnesota practice during our BTN Football Tour in August. The Gophers open a new chapter in their program, with former Northern Illinois head coach Jerry Kill taking over for Tim Brewster. It's no secret that Minnesota struggled under Brewster, compiling a 15-30 record in his four seasons, but now it's Kill's turn to try to turn the program around. Minnesota opens the season Sept. 3 at USC. See all of our Minnesota Preview video inside.

MarQueis Gray came to Minnesota as a highly touted quarterback prospect. He spent the first season learning the ropes under Adam Weber before staring at receiver last season. Well, it's finally his time under center in Minneapolis.

Minnesota has a new defensive coordinator. His name is Tracy Claeys, and he has a long history with head coach Jerry Kill. He also takes over a defense that allowed 34 points per game in Big Ten play last season.

Like Claeys, new offensive coordinator Matt Limegrover is one of Jerry Kill's long-time assistants. He inherits an offense that will feature a quarterback not named Adam Weber for the first time since 2006.

Which Gophers do Coach and Howard think Big Ten fans should be looking out for in 2011? Find out below.