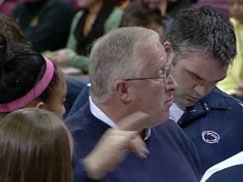 But the story for this volleyball season is Penn State, also the preseason favorite to win the Big Ten. Big surprise, right?  Here's GoPSUSports.com's story on the Nittany Lions:

"The four-time defending national champion Penn State women's volleyball team has been selected as the Big Ten favorite for the 2011 season by the league coaches, conference officials announced Thursday. This is the seventh consecutive season the Nittany Lions have topped the preseason list. In addition, three members of the squad have earned Preseason All-Big Ten honors from the coaches.

Junior Kristin Carpenter (Mechanicsville, Va.) and sophomores Deja McClendon (Louisville, Ky.) and Katie Slay (Raleigh, N.C.) all picked up preseason accolades. McClendon was a unanimous selection and the awards were the first career honors for all three squad members.

The eight-time defending Big Ten champions top the preseason poll for the eighth time since 2001. Illinois and Nebraska tied for second in the preseason poll and Purdue was slated fourth. Minnesota was picked to finish fifth and Michigan State rounded out the poll at sixth."