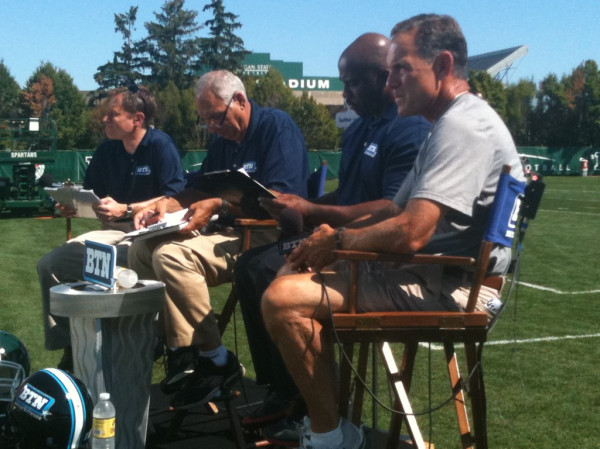 Three-thousand-something miles later, the BTN Summer Football Tour is complete. Re-live parts of my trip below (I only went to Illinois, Indiana, Michigan, Michigan State, Ohio State and Penn State this year):

Best stop: Penn State is always one of my favorite stops on our tour. From the beautiful practice field to seeing JoePa to the first-class treatment we receive, there's never been a bad trip to Happy Valley. But our behind-the-scenes tour of Michigan Stadium and its ridiculously large scoreboards might have taken the cake this year. It's not every day that you get to walk wherever you want in one of the nation's most iconic stadiums, so it's something I'll never forget. I even walked the tunnel from Michigan's locker room to the playing field, which was a memorable experience despite no gameday atmosphere present. Check out the video here.

Best non-football entertainment: Indiana University's Cook Hall. Even if you aren't an Indiana basketball fan, there's plenty in this state-of-the-art facility to respect and keep you entertained. It's basically a museum for IU hoops. The Ohio State Athletics Hall of Fame was a fun stop, as well.

Best meal: Looking back at my receipts, needless to say, I ate a bunch of bad food.  There was a meal consumed at Hardee's, Taco Bell and Arby's, among other fast food chains, on the trip. If I had to pick the best one, though, it would be between the Mimi's Beginning sandwich (No. 25) at Maize and Blue Deli in Ann Arbor and the spaghetti and meatballs at Coach DiNardo's DeAngelo's in Bloomington, Ind.

Best quote: "That's a hard question. We can line it up and we can see who's the best. Both sides of the ball, we can do a little challenge for it. But I ain't giving him all the credit." Penn State LB Gerald Hodges, on whether he or Derek Moye is the best No. 6 at Penn State

Lasting impression: Illinois looks like a strong sleeper pick this season. The Illini always look good when it comes to the eye test, and this year was no different. While Illinois lost a lot of talent, it has a bunch of young guys ready to emerge. Nathan Scheelhaase looks great – not to mention much bigger and stronger – the freshman running backs are the real deal and the fact both highly respected coordinators are back gives the Illini hope. Now, can they do it on the field?