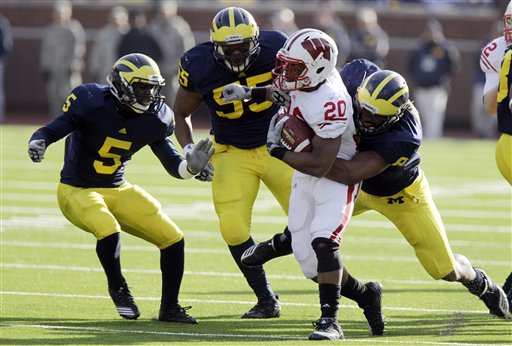 Five Big Ten football teams, led by reigning co-champ Wisconsin, are ranked in the preseason Coaches' Poll, released Thursday morning. The Badgers, fresh off a Rose Bowl berth, come in at No. 10, followed by Nebraska (11), Ohio State (16), Michigan State (17) and Penn State (25). Oklahoma lands at No. 1, with Alabama, Oregon, LSU and Florida State rounding out the top 5.

– Preseason polls are meaningless. I say it every year, and I'll continue to do so until they are gone. There's simply no way to know how teams will play one year to the next, so why not let them prove it on the field before ranking them? In a perfect world, polls wouldn't start until mid-October. That said, these polls exist for the purpose of creating excitement and getting people talking about the sport, which I'm doing right now. That doesn't mean money-making January bowl games should be decided, in part, by preseason polls, though. It happens, just  look at the Big Ten last year. Wisconsin went to the Rose Bowl over Michigan State, which beat the Badgers, thanks in large part to the former being ranked No. 12 in the preseason poll, compared to unranked for the latter. It makes no sense. And yes, I realize the Spartans had a terrible late loss against Iowa — point is, the Big Ten had three one-loss teams and Michigan State beat Wisconsin, which beat Ohio State, which didn't play Michigan State.

– I'm not surprised to see five Big Ten teams ranked, but I am surprised to see Penn State as the fifth. Considering some of the Nittany Lions' issues, I would have predicted Iowa as the conference's fifth team.

– Michigan State should be ranked higher — at least higher than Big Ten foe Ohio State. The Spartans return a lot of talent, boast arguably the conference's top quarterback and running back, and don't have any distractions or suspensions. Based on the ranking, you have to think the coaches haven't gotten over Michigan State's embarrassing bowl loss.

– How are there two sub-500 teams, Georgia (6-7) and Texas (5-7), ranked? What did these two teams show the coaches since they finished last year, particularly bowl-less Texas? I wonder if the teams' big names and fertile recruting bases had something to do with it? At the very least, make the teams prove it early this year before voting solely on their history.

– It wouldn't surprise me one bit if Iowa and Northwestern enter this poll in the season's first couple weeks.

– Based on all the hype surrouding Notre Dame this summer, I'm pleased to see them only come in at No. 18. It could have been much higher.