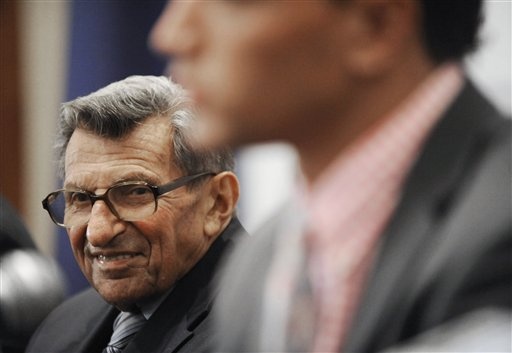 Big Ten Media Days came and went late last week in Chicago, and it was an eventful couple of days at the Hyatt Regency McCormick Place. While no preseason favorites were announced this year, there still was plenty of activity and countless storylines. You had legendary Penn State coach Joe Paterno back for yet another season, a new perennial power joining the conference (Nebraska), and five new coaches in attendance.

Here's a quick recap from Thursday and Friday's events:

Players to watch: As mentioned above, the Big Ten opted not to release preseason conference favorites this year, teams nor players. Instead, the Big Ten created a list of "Players to Watch." There were five in the Legends Division (Denard Robinson, Kirk Cousins, Jared Crick, Lavonte David and Dan Persa) and seven in the Leaders Division, due to a tie (Nathan Scheelhaase, Damarlo Belcher, Mike Brewster, John Simon, Michael Mauti, James White, Montee Ball).

Flip of the coin: A coin flip Friday at the Kickoff Luncheon gave the Legends Division (Iowa, Michigan, Michigan State, Minnesota, Nebraska, Northwestern)  homefield advantage at the first annual Big Ten Football Championship Game on Saturday, Dec. 3 at Lucas Oil Stadium. Who knows what that's worth, but we do have a better idea of the possible uniform combos we could have for the game now. And with a month left before the season kicks off, it's the small things like that that keep some of us entertained.

Playing around: Nebraska coach Bo Pelini played at Ohio State from 1987-90, a few years before Ohio State interim coach Luke Fickell suited up in scarlet and gray, so it's no surprise Pelini made his way over to the Buckeyes' signing table Friday morning. But it was the icebreaker that made this visit memorable. When Pelini peeked his head through the line, he pretended to be a fan and asked Fickell for his autograph. Fickell, as you can imagine, got a kick out of it.

Perfect fit: No matter who you talked to — players or coaches — everybody had nothing but praise for Nebraska and what it brings to the Big Ten. Purdue's Joe Holland said the conference is "much better now," and Northwestern's Pat Fitzgerald said it "makes the Big Ten the best conference in the nation." The Huskers bring five national championships and boast one of the most passionate fan bases, so, yeah, they're a great fit in the Big Ten.

Wisconsin's Nick Toon tells you about his much-talked about attire.

Penn State's Derek Moye donned some pink, and he said the look was met with its share of approval.

As reported last month, Indiana will have new uniforms this fall.

Rejoice, Purdue fans: Despite a scare, this is still your Purdue Pete.

"Oh, for crying out loud!" – Penn State's Joe Paterno, on having a BTN camera guy use a cup of water and his finger to fix the legendary coach's hair before shooting a BTN photo shoot.

"I can honestly say I've never done this." – Ohio State's Luke Fickell, on getting make-up put on before a BTN PSA shoot.

"I'm up to 5,000!" – Northwestern's Pat Fitzgerald, on how many times he was asked about Dan Persa's Achilles' injury Thursday.

"I play for Penn State, we don't celebrate after TDs." – Penn State's Derek Moye, on being asked to act like he's celebrating a TD during a BTN shoot.

"I don't hate anyone. Hate is a strong word." – Michigan State's Kirk Cousins, on his feelings toward heated rival Michigan. Watch more impressive words from Cousins from his Kickoff Luncheon speech.

"I don't really watch much sports. If you turn on my TV right now, it's probably on some cartoon." – Michigan State's Edwin Baker, on what he watches on TV. Speaking of Baker, he has quite the championship ring on his finger.

"Now our champion will be decided on the field." – Indiana's Kevin Wilson, on how he feels about the conference's new championship game.

– Michigan's Mike Martin does an interview with BTN