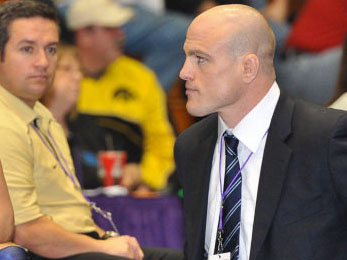 Penn State wrestling coach Cael Sanderson wasn't going to leave powerhouse Iowa State, the school where he went 159-0 and won four NCAA crowns as a student-athlete, for any run-of-the-mill coaching position. Penn State lured Sanderson away from Iowa State in 2009, and in his second year at State College, Sanderson guided the Nittany Lions to the Big Ten title and national championship. His incredible impact at Penn State won him Men's Coach of the Year on the 2011 Big Ten Network Awards Show.

The Nittany Lion wrestlers were the 2011 Big Ten Champions, claiming the school's first ever conference title, in early March in Northwestern and then winning the 2011 NCAA National Championship in Philadelphia on March 17-19 in front of a partisan Penn State crowd at the Wells Fargo Center. Penn State posted a superb 17-1-1 dual meet record which included both the Virginia Duals title and a co-championship at the Southern Scuffle. Penn State set a school record with a 6-1-1 Big Ten dual meet as well. Penn State beat out the Ohio State men's basketball team and the Wisconsin football team to claim the honor."