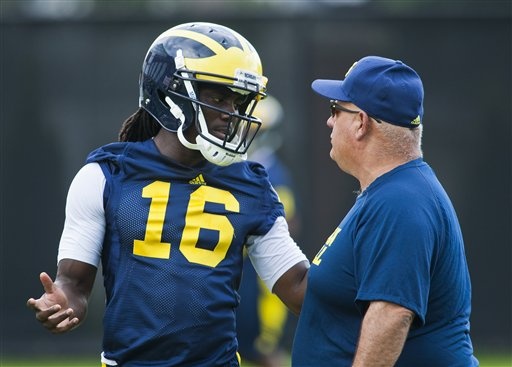 Here at BTN, we're constantly looking for ways to help Big Ten fans better understand which schools comprise the new football divisions and which division, Legends or Leaders, the schools call home. Let's start with the teams in your school's division: I like to use the one-division-includes-Iowa-and-all-the-M-and-N-schools approach. That helps break it up, because then you know all the other schools, Illinois, Indiana, Ohio State, Penn State, Purdue and Wisconsin, make up the other division.

To further help fans associate the teams and the divisions — not to mention to create some super-early debate — I picked a preseason "fantasy" team for each of the divisions. Which division would win? Who was left off? Feel free to tell me by leaving a comment below.

Toughest pick: Quarterback. The Legends Division is loaded with returning talent under center, and the decision between Denard Robinson, Kirk Cousins, Dan Persa and Taylor Martinez was a very tough one.

Toughest pick: The second running back. Pick a Wisconsin running back, and he could lead the Big Ten in rushing. As good as Montee Ball and James White are, though, Penn State up-and-comer Silas Redd could be poised for a breakout campaign.