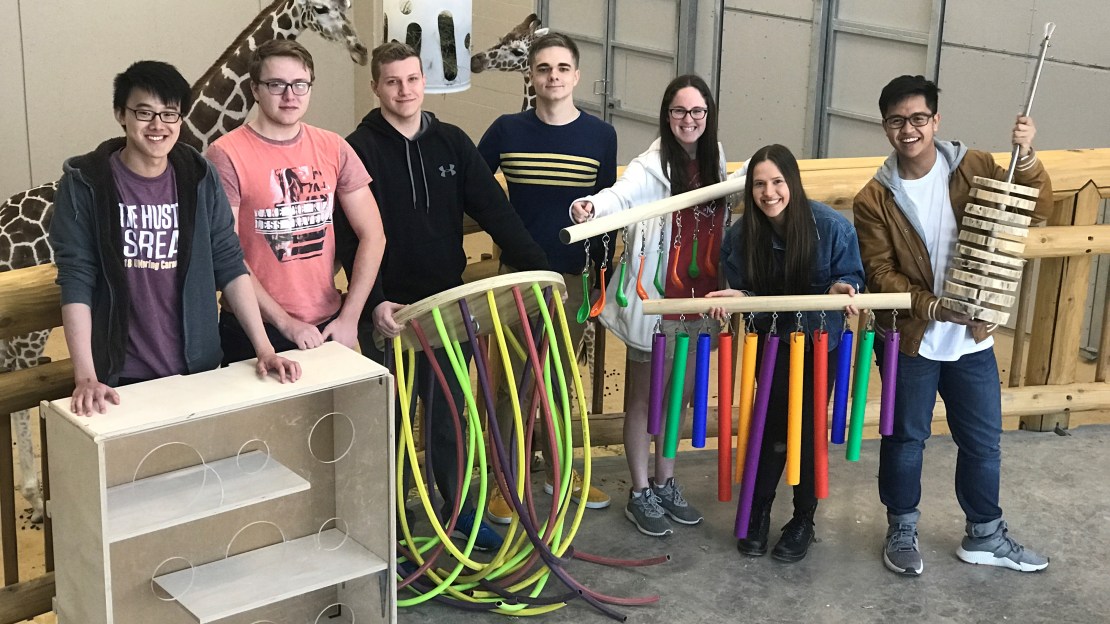 College can be a wild place. At times, you don't know what off-the-wall opportunity tomorrow will bring.

To wit, a group of undergraduate students at the University of Nebraska-Lincoln has been spending its Saturdays researching giraffe behavior and manipulating rainbow-colored garden hoses.

These students are part of the UNL Theme Park Design Group, and their task has been to conceptualize and build creative new giraffe toys for the Lincoln Children's Zoo.

The Theme Park Design Group originated when John Strope, a mechanical engineering sophomore, put out a call for students interested in forming a team to enter Disney Imaginations, a national design competition.

There was enough interest for the group to become an official student organization, and its scope has widened from there.

"A lot of our time in meetings is spent on giving our members a foundational knowledge of one, what is themed entertainment? And two, how the industry operates," says Strope, who also stresses interdisciplinary collaboration as a focus. "Our mission really became centered around bringing together kids from across majors to work on these different projects."

In addition to competitions, the group has also attended conferences and worked on community projects. Last year, for instance, students designed an attraction for a superhero exhibit at the Lincoln Children's Museum.

The latest project is part of an expansion at the Lincoln Children's Zoo and requires students to apply their knowledge of themed entertainment to giraffe toys.

"Basically, a lot of times you'll have a zoo enclosure that's like a multi-million-dollar enclosure and then you'll see a monkey playing with a milk carton or that kind of thing," says Strope.

The students were tasked with building toys that appeal to and are safe for giraffes. They have also aimed to fit the toys into the exhibit's theme, keeping the color palette and existing art in mind.

"We did a lot of research on giraffes and what stimulates them. They're big on color, sound and moving their tongue around," explains Zoe Jirovsky, mechanical engineering sophomore and vice president of the Theme Park Design Group. "There's definitely a lot of thought that went in and a lot of research before a toy even had materials to begin building."

Once the group had their plans drawn up, they ordered materials and started creating at Nebraska Innovation Studio, an on-campus makerspace. Students used advanced programs, tools and machines - such as a giant CNC laser wood carver - to bring their ideas to life.

"That was really fun, just an interesting one to make because we had a lot of challenges of like, 'What material are we going to use for the strips that's durable and that we can buy in different colors?'" says Jirovsky. "We just had a lot of design challenges to overcome on that one, and getting it done was very satisfying."

Strope's favorite is the puzzle feeder, designed to cater to the giraffes' tongues, which can be up to 18 inches long.

"We're building this giant clear box that they'll put food inside, and the giraffes will have to work their tongues through this maze to get the food out," says Strope. "And you'll actually be able to see their tongues working through the box from the other side."

From the start, Innovation Studio has been fundamental to the Theme Park Design Group. Most of the students' work happens there, and the staff also play a role in finding opportunities for the group through their connections. The studio's director, David Martin, is also the group's faculty advisor.

As the students continue to work on the zoo project, they also plan to enter more competitions and might eventually even host their own attraction on campus.

"The whole point of our group is, even if you're not interested in themed entertainment, hopefully you'll be able to gain some sort of skill or technique that will help you later on down the road," says Strope. "I think that we should be proud of the skills that people have gained and hopefully they've learned a little bit about problem solving and teamwork."