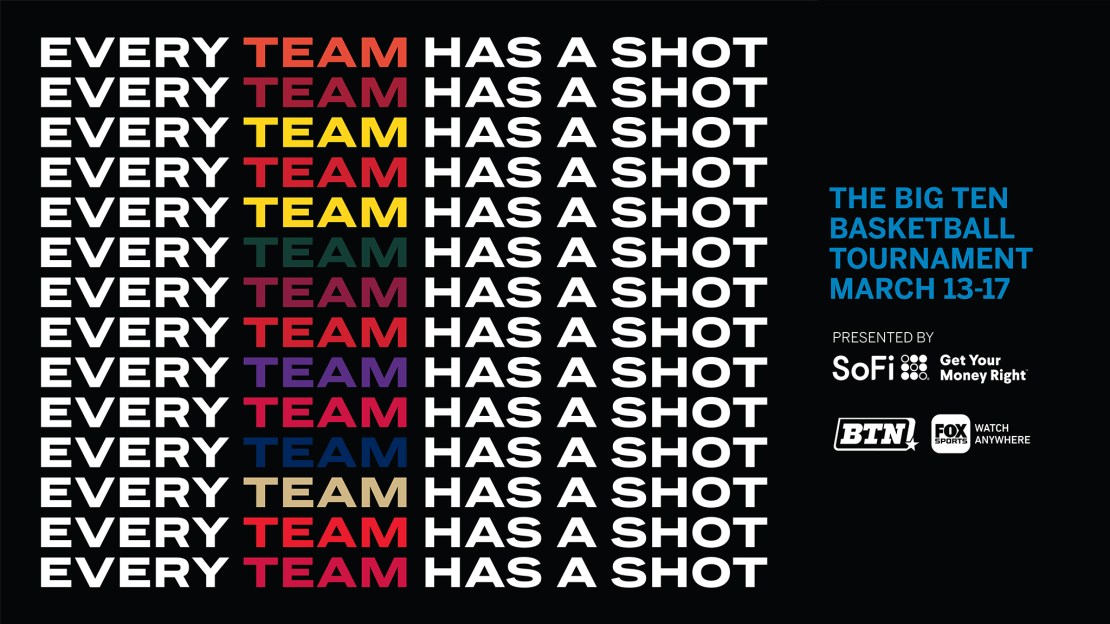 BTN?s week-long coverage of the Big Ten Men?s Basketball Tournament presented by SoFi begins on Monday, March 11, and includes the tournament?s first 10 game broadcasts, a comprehensive studio presence and a talented lineup of broadcasters and analysts on-site for the finale of the Big Ten season.

Coverage begins at 5 p.m. ET on Monday, March 11, with the live announcement of the annual Big Ten basketball awards on the BTN Live: All-Conference Selection Show. Host Mike Hall and analyst Jon Crispin will reveal All-Big Ten selections, as well as Big Ten Player, Coach of the Year and Freshman of the Year. Interviews with select award winners will also be included.

On Tuesday at 5 p.m. ET BTN Live: B1G Basketball Tournament Preview will explore the Big Ten Tournament with Rick Pizzo and analysts Stephen Bardo, Crispin and Shon Moris. The group will preview the games, potential matchups and star players as 14 teams battle for a conference championship and their place in the Big Dance.

Studio coverage continues before and after games all week, including three live shows on Wednesday, eight live shows on Thursday and Friday, three shows on Saturday and two on Sunday. B1G Basketball Game Break shows will originate from the 100-level concourse at the United Center. Dave Revsine, Hall and Pizzo will rotate as hosts, along with analysts Andy Katz, Crispin, Morris, Bardo, Jess Settles and Mike DeCourcy.

The Journey, BTN?s Emmy-nominated original series, will also be on-site to capture behind-the-scenes footage throughout the tournament. The one-hour season finale of The Journey: Big Ten Basketball 2019 will debut at 7:00 p.m. ET on Tuesday, March 19.

The Big Ten Men?s Basketball Tournament Presented by SoFi begins on Wednesday, March 13, from the United Center in Chicago with the first 10 games airing live on BTN, the FOX Sports App and BTN2Go. The daily schedule is listed below (all times Eastern). Please note, times are approximate.