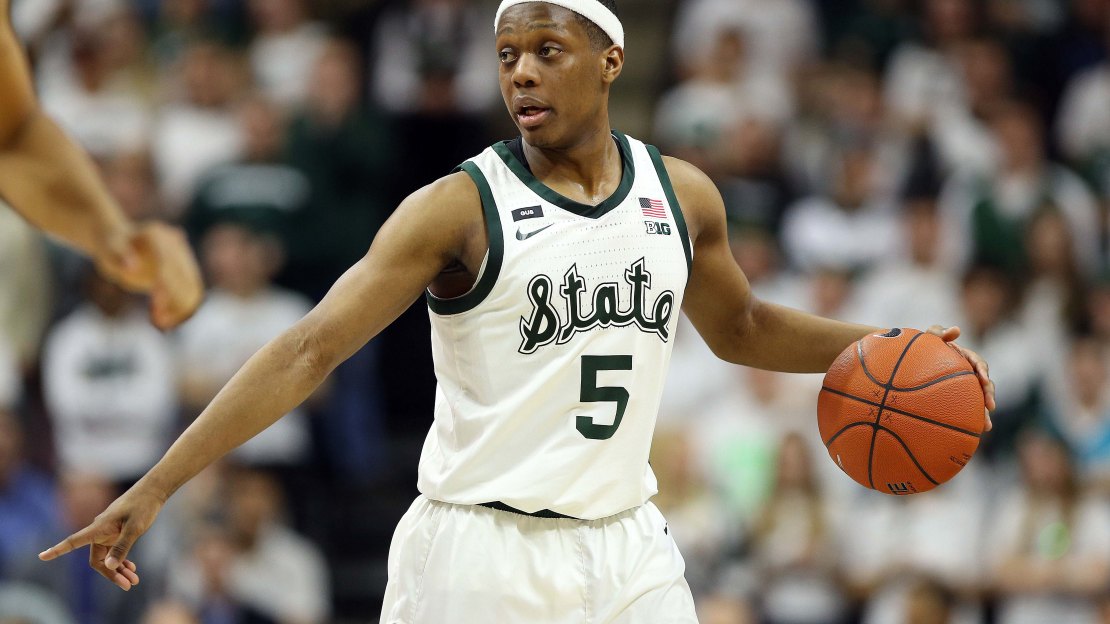 The Big Ten office handed out its latest weekly men's hoops honors Monday, and each of the three recipients are familiar names.

Here's a look at the latest honorees.

Co-Players of the Week: Cassius Winston, Michigan State, G
? Averaged 20 points, 7.3 assists, 3.3 rebounds and shot 47.1 percent (8-of-17) from 3-point range leading Michigan State to a 2-1 week in Big Ten action
? Helped Spartans to a pair of wins over ranked teams
? Scored 23 points and handed out seven assists, connecting on 3-of-5 3-point field goals in win at #19/21 Iowa
? Tallied 14 points and dished out seven assists in victory over #13/16 Maryland
? Had 23 points, eight assists and seven rebounds, making 4-of-7 on 3-pointers at Purdue
? Leads Big Ten in assists per game (7.3), which is fifth in the nation
? Earns the fourth Big Ten Player of the Week honor of his career and this season and second in as many weeks
? Joins Draymond Green (2011-12) and Denzel Valentine (2015-16) as only Spartans to earn four Big Ten Player of the Week honors in a single season
? Last Michigan State Player of the Week: Cassius Winston (Jan. 28, 2019)

Jordan Murphy, Minnesota, F - Sr.
? Averaged 19 points, 11 rebounds, 3.5 assists and shot 63.2 percent (12-of-19) from the field in two games last week
? Posted double-doubles in a pair of games against ranked teams
? Led the Gophers in a win over #19/21 Iowa with 23 points, 11 rebounds and six assists, making 7-of-9 field goals
? Moved to second in career rebounds in Big Ten history in the win over Hawkeyes and stands with 1,150 in his career, behind Ohio State?s Jerry Lucas, who had 1,411 from 1959-62
? Registered a double-double with 15 points and 11 rebounds in two-point loss at #5/6 Michigan
? Leads Big Ten in rebounds per game (12.0), which is fourth in the nation
? Earns the fifth Big Ten Player of the Week honor of his career and first season
? First Gopher to earn five career Big Ten Player of the Week honors
? Last Minnesota Player of the Week: Jordan Murphy (Nov. 27, 2017)

Freshman of the Week: Ignas Brazdeikis, Michigan, G/F
? Averaged 19 points and nine rebounds in guiding Michigan to an undefeated week with wins over Minnesota and at Indiana
? Posted his second double-double of the season with 18 points and a career-high tying 11 rebounds along with clutch 9-of-11 performance from the foul line versus the Gophers
? Recorded his sixth 20-point game of the season in converting 8-of-12 from the field as Michigan posted its largest win at Indiana in the rivalry?s history
? Also added seven rebounds and made a career-high tying three 3-pointers in win at Hoosiers
? Earns his fourth Freshman of the Week honor, most for a Wolverine in history, surpassing Tim Hardaway Jr. (2010-11) and Nik Stauskas (2012-13), who each earned three
? Last Michigan Freshman of the Week: Ignas Brazdeikis (Dec. 31, 2018)