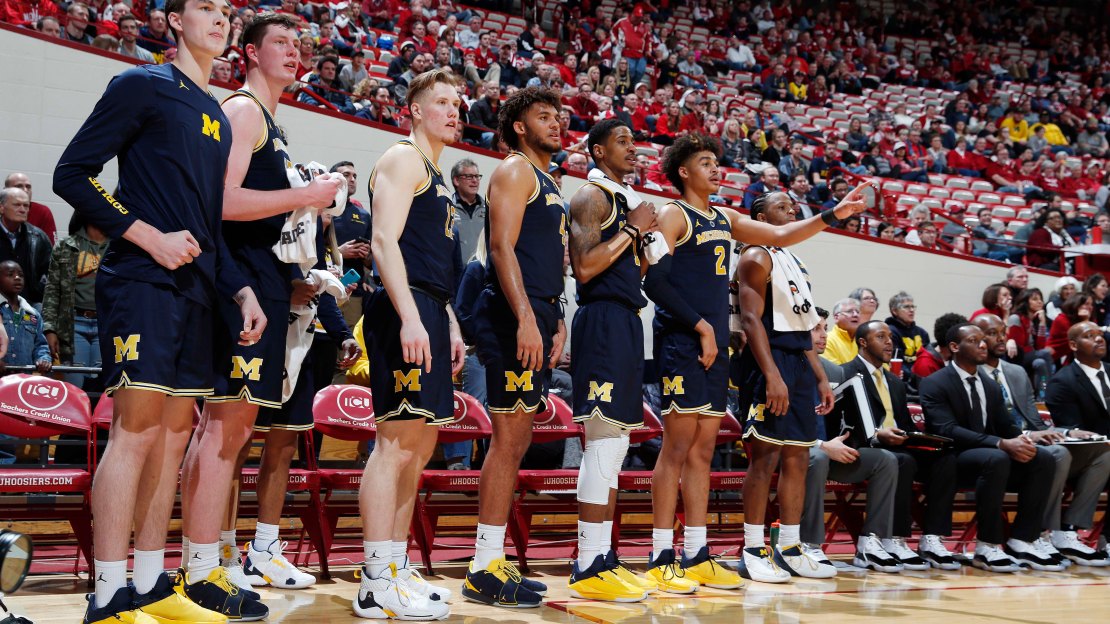 One week, that's how long Michigan's stint at No. 2 lasted in my latest Big Ten Power Rankings, presented by ArcelorMittal.

The Wolverines return to No. 1, thanks to wins over Minnesota and Indiana, coupled with Michigan State's loss at Purdue. The Spartans don't drop fall, though, back to No. 2.

1. Michigan (19-1, 8-1). Depth, role development and consistency on offense down the stretch will define the season. The defense continues to shine, and we should expect to see better consistency from Charles Matthews and Isaiah Livers down the stretch.
Last week: 2

2. Michigan State (18-3, 9-1). As great as Cassius Winston has been, the biggest key to the Spartans reaching their true potential is in getting Joshua Langford and Kyle Ahrens back from injury. Balance for them is paramount to their success.
Last week: 1

3. Purdue (14-6, 7-2). The Boilers have been remarkable in conference play. Getting consistent contributions from any Boilermaker who Matt Painter calls on is an example of strong identity, the byproduct of established culture and achievable expectations.
Last week: 4

4. Maryland (16-5, 7-3). The Terps have looked young in their losses. The Illini forced their offense away from the basket in the second half, exposing a lack of confidence from some of the young Terrapins. Eric Ayala, Aaron Wiggins, Ricky Lindo Jr. and Jalen Smith are more important than we initially may have thought.
Last week: 3

5. Wisconsin (14-6, 6-3). As this team develops better consistency from guys like Brad Davison, Kobe King and Nate Reuvers, the game will get easier for Ethan Happ. 3-point shooting does more for the Badgers than put points on the board. Trust in the system has always been there, and trust in one another continues to grow.
Last week: 6

6. Iowa (16-5, 5-5). The loss at Minnesota was a reminder that the margin for error on the defensive end is not what you'd think it would be with such firepower on offense. The Hawkeyes have to maintain focus on limiting opportunities on the defensive end because the offense can't beat every opponent, particularly not in conference play.
Last week: 5

7. Minnesota (15-5, 5-4). The Gophers thrived offensively against Iowa, as the Hawkeyes do not defend the ball the way other opponents will. The ceiling is high for this team, but the point guard position may be what makes or breaks it for the Gophers.
Last week: 7

When two-time NPOY Jerry Lucas is the only name ahead of you in the record book, you're a special talent. pic.twitter.com/2V5JP5E8O6

8. Nebraska (13-7, 3-6). The loss of Isaac Copeland (knee) for the year could derail confidence for an already short-on-depth team. Even more will be required from Isaiah Roby from both the perimeter and inside. It will be interesting to see how this team adapts to the loss of a star player.
Last week: 8

9. Ohio State (13-6, 3-5). As much as I see limitations with the Buckeyes, I also see discipline and a trust in one another and how they play. The fundamentals and the principles with which they play will always make them competitive, but this may be the reset year that was expected last season for Chris Holtmann.
Last week: 10

10. Northwestern (12-8, 3-6). I don't like to define a team by its close losses, however that has been the case here. The Wildcats have looked good, but have to maintain consistency and discipline on the defensive end to make up for offensive deficiencies at point guard. This is particularly true in late-game situations.
Last week: 11

11. Indiana (12-8, 3-6). As talented and skilled as Romeo Langford and Juwan Morgan are, there has been very little balance and continuity on the offensive end. A lack of consistent contribution from the rest of the team seems to have taken a toll on their attention to detail, on both sides of the floor.
Last week: 9

12. Rutgers (10-9, 3-6). The Scarlet Knights have thrived in messy games. Steve Pikiell has done a great job building confidence by fighting to win the small battles in a game. Winning 50/50 balls, rebounding and strong half-court defense increase trust in the process. Getting Eugene Omoruyi back from a dislocated kneecap is a significant emotional lift as well.
Last week: 12

The Scarlet Knights escape Happy Valley with a 64-60 win, and it marks the first time Rutgers has won back-to-back @B1GMBBall games: pic.twitter.com/JlqQ7DAgM9

13. Illinois (6-14, 2-7). The potential of this team continues to rise. It's impossible to figure out the ceiling of the Illini, as it may be defined by their ability to find consistency from the 4-man in the lineup. Tevian Jones may be an important piece of their success going forward.
Last week: 13

14. Penn State (7-13, 0-9). It's hard to imagine this Nittany Lions team without a conference win. They showed us their potential in a win against Virginia Tech in November, but it does not appear to be the same team in conference play. They play hard, but have not been able to settle in offensively, leading to inconsistent play on both ends.
Last week: 14