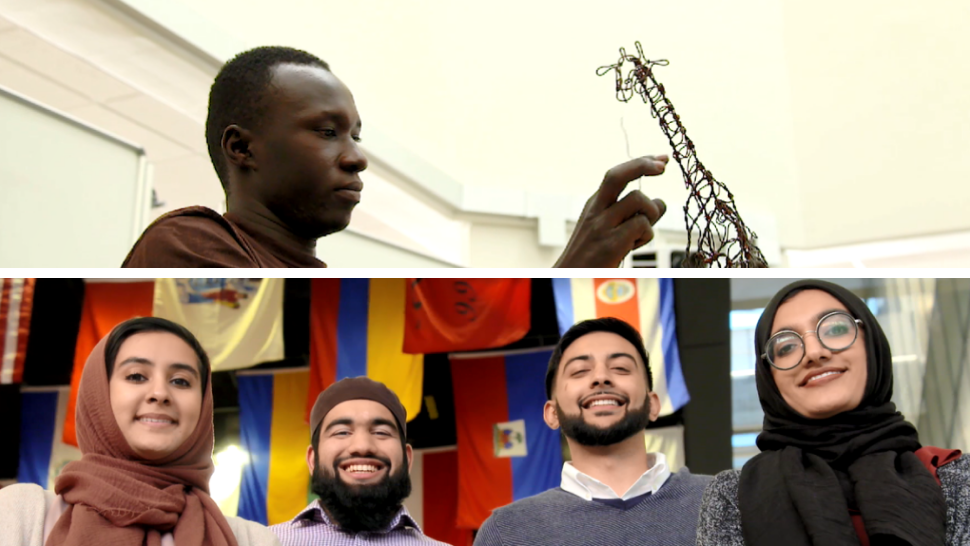 We know, we know… football season is almost over. These two teams aren't even facing off again this season. But all of that doesn't mean that the Research Rumble train has to grind to a halt, babies. We still have plenty of great stories of impact, innovation and inspiration upon which we can shine that proverbial spotlight.

Today, we're featuring two tremendous tales of Big Ten students and faculty making a difference on a global scale. When you're as big as one of our universities, international boundaries – and oceans – aren't going to stop you from making a difference.

In one corner, we have the Spartans, who have set their sights on eliminating poaching in Africa through the Snares to Wares Initiative. The program stems the tide of this illegal trade by providing young people, who are often drawn into the world of poaching, with arts trade training that teaches them to produce gorgeous sculptures, the sale of which funds the program and provides an income.

In the opposite corner, we have Rutgers-born Roshni Rides. An award-winning startup, Roshni Rides looks to provide an affordable transportation solution for those living in impoverished and densely populated communities in the developing world.

So, without further ado, Let's prepare ourselves to RUMBLE!!!!!

How Michigan State is conserving wildlife, one statue at a time: BTN LiveBIG

A nonprofit initiative created by wildlife researchers at Michigan State University, Snares to Wares, has been working to stem the tide of poaching in Uganda. Tutilo Mudumba, a Ph.D. candidate at Michigan State and co-director of the initiative, has been working with Snares to Wares since its inception. As he explains, the strategy they employ seeks not just to abolish poaching, but to replace it with a viable alternative.

"Subsistence poaching in Uganda is very common," says Mudumba. "It is as old as the establishment of protected areas in Africa. We want to get rid of all wire snares in the landscape, so we are collecting these wires and passing them over to youth in the nearby towns, and these youths are turning these wires into sculptures. They make lion, giraffe and elephant sculptures that are for sale both locally and internationally. Thereby sustaining the youth not from the killing of wildlife, but from the sale of images of wildlife."

A Rutgers startup is giving refugees a ride: BTN LiveBIG

According to the United Nations High Commission on Refugees, there are over 75 million displaced and stateless people around the world. That's just under one percent of the global population.

These refugees are often fleeing conflict at home. The settlements and camps, both formal and informal, where they find some semblance of refuge are largely overcrowded and underserved. Children struggle in schools with scant resources. Food, fuel and jobs are scarce.

With this in mind, four Rutgers University School of Business students set about examining the troubles refugee settlements face and what immediate steps can be taken to alleviate these burdens.

Their idea? Create a low-cost, easy-to-use transportation network that connects refugees and other displaced persons to the vital resources they need to live happy, healthy, productive lives. They call their system Roshni Rides.