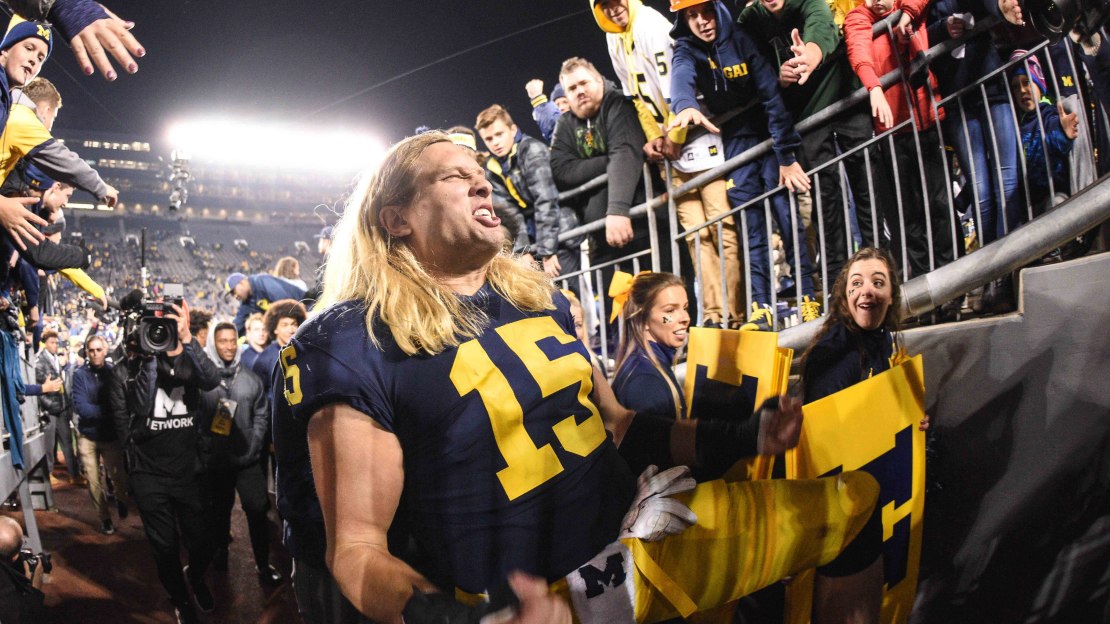 One week to go. Here are my Big Ten Power Rankings, presented by ArcelorMittal.

See my full latest list below (all times ET).

1) Michigan (10-1, 8-0) – Michigan will most likely stay at No. 4 in the CFP Rankings – Michigan beat Indiana 31-20. Michigan was trailing at half 17-15. Karan Higdon gave them the lead in the 3rd quarter. Michigan was able to move the ball on Indiana but couldn?t convert in the red zone. Jake Moody, who replaced Quinn Nordin who was ill, set a school record with six field goals. Shea Patterson had a nice game going 16 for 28 for 250 yards and a TD to Nick Eubanks. Initial results regarding Chase Winovich, who left the game early, are positive as X-rays and CAT Scans were negative.

UP NEXT: Michigan plays at Ohio State Saturday at Noon on FOX.

2) Ohio State (10-1, 7-1) – Ohio State beat Maryland 52-51. Ohio State escaped College Park with the win after a errant pass on a 2 point conversion attempt by Maryland. The Buckeyes issues continue on defense as they allowed 535 total yards to Maryland, 339 of which were on the ground. The explosive plays continue to haunt the Buckeyes all season long. If it weren?t for the play of Dwayne Haskins who went 28 for 38 for 405 yards, 3 TDs, 1 INT and three rushing TDs, the Buckeyes wouldn?t have escaped with the W. J.K Dobbins added 27 carries for 203 yards and one TD. The Buckeyes are a home underdog this week vs. Michigan for the first time since 2004.

UP NEXT: Ohio State plays Michigan Saturday at Noon on FOX

Here's how he did it. pic.twitter.com/yI1VxFsp9z

3) Penn State (8-3, 5-3) – Penn State beat Rutgers 20-7. Trace McSorley broke the record for the most wins as a Penn State QB. It wasn?t the best performance by Penn State but they came away with the victory. McSorley was 17-37 for 183 yards 2 TD and 1 INT. He also got 39 yards on the ground as well. Both of McSorley?s TD passes went to Pat Freiermuth, the outstanding freshman TE. The Nittany Lion defense was the star of the game forcing 3 turnovers, getting 4 sacks, and 11 tackles for loss.

UP NEXT: Penn State plays Maryland Saturday at 3:30 pm et on ABC

4) Northwestern (7-4, 7-1) – Northwestern beat Minnesota 24-14. Pat Fitzgerald said his team felt disrespected with being underdogs coming into this game. With the game time temp being just 23 degrees, most of the Wildcat team warmed up shirtless, proving they weren?t overlooking the Gophers a week after clinching the west. LB Nate Hall had two INT that helped the Wildcats get the W. Clayton Thorson was 15-21 for 230 yards. It was the best game he?s played in 4 weeks.

UP NEXT: Northwestern plays Illinois at 3:30 p.m. on BTN.

5) Wisconsin (7-4, 5-3) – Wisconsin beat Purdue 47-44 in 3 Overtime?s. The Badgers were without Alex Hornibrook as he missed his second consecutive game with a head injury. Wisconsin was trailing 27-13 without under 10 minutes to go before Jack Coan threw two TD passes to Danny Davis in the fourth quarter to tie the ball game. Coan went 16 of 24 for 160 yards and 2 TD. The main story was Jonathan Taylor. The terrific sophomore had 33 carries for 321 yards and three TDs.

UP NEXT: Wisconsin plays Minnesota on Saturday at 3:30 p.m.

6) Iowa (7-4, 4-4) – Iowa beat Illinois 63-0. This win gave Kirk Ferentz his 150th career win at Iowa, making him the fifth coach in Big Ten History to win 150 games as a member of the Big Ten. He joined Woody Hayes, Amo Alonzo Stagg, Bo Schembechler, and Joe Paterno. Nate Stanley had a nice day going 13 of 21 for 178 yards and three TDs and 1 INT. All three TDs went to his tight ends – two to T.J. Hockenson and one to Noah Fant. The Hawkeye defense got back to form, shutting down Illinois offense forcing four turnovers. –

UP NEXT: Iowa plays Nebraska Friday at Noon et on FOX

7) Nebraska (4-7, 3-5) – Nebraska beat Michigan State 9-6. The Huskers outscored Michigan State 9-0 in the 4th Quarter to get the victory. It was the first win without scoring a TD since 1937. Devine Ozigbo had 18 carries for 74 yards and eclipsed 1,000 yards on the season for the first time since 2014 when Ameer Abdullah did so.
This game was difficult for both offenses to move the ball in the windy and cold conditions. Antonio Reed had a monster day for Nebraska with 7 tackles, 3 TFL, sack, 2 forced fumbles and an INT. Nebraska has won 4 of their last 5.

UP NEXT: Nebraska plays at Iowa on Friday at Noon on FOX

8) Michigan State (6-5, 4-4) – Michigan State lost to Nebraska 9-6. The Spartans were outscored 9-0 in the 4th Quarter to lose this ball game. Rocky Lombardi went 15-41 for 146 yards and an INT. No touchdowns for the second straight week. Kenny Willekes had another big day with nine tackles, 3.5 TFL, and fumble recovery. Snow and heavy winds made it difficult to do anything through the air and yet the Spartans threw it 41 times and ran it 38, including throwing it 15 times in the last 16 plays.

UP NEXT: Michigan State plays Rutgers Saturday at 4 p.m. on FOX.

9) Indiana (5-6, 2-6) – Indiana lost to Michigan 31-20. The Hoosiers put up a fight with the No. 4 Wolverines in Ann Arbor. Indiana had the lead at halftime up 17-15 and kept it within a score going into the 4th Quarter but couldn?t hang on to pull the upset. The Hoosiers got a big performance from freshman RB Stevie Scott who carried it 30 times for 139 yards and a TD, extending his school record to 9. Scott has 1,033 rushing yards which is most by a true freshman in school history. The Hoosier will play for bowl game eligibility against rival Purdue.

UP NEXT: Indiana plays Purdue Saturday at Noon on ESPN 2.

10) Purdue (5-6, 4-4) – Purdue lost to Wisconsin 47-44 in the 3 OTs. Purdue had a 27-13 lead in the 4th Quarter but couldn?t hold on in regulation. David Blough had a great day through the air going 31-48 for 386 yards and 4 TD. Rondale Moore was a standout again as he had 9 receptions for 114 yards and 2 TDs. Moore also had four carries for 27 yards. However the Boilermaker defense could not stop Wisconsin. The defense gave up 545 total yards, 385 of it on the ground. Purdue will have to beat IU for the Old Oaken Bucket to be bowl eligible.

UP NEXT: Purdue plays at Indiana Saturday at Noon on ESPN 2.

11) Maryland (5-6, 3-5) – Maryland lost to Ohio State 52-51. Maryland was a failed 2 point conversion in OT from upsetting the Buckeyes in College Park. The Terrapins gained 535 total yards on Ohio State. 339 of those yards came on the ground. The main standout was RB Anthony McFarland who carried the ball 21 times for 298 yards and 2 TDs. Unfortunately for Maryland they weren?t able to stop Ohio State all game as the Terrapins allowed 688 yards to Ohio State. If the Terps could?ve pulled it of they would?ve become bowl eligible. Now they will need a road upset in Happy Valley to go bowling.

UP NEXT: Maryland plays at Penn State Saturday at 3:30 p.m. on ABC.

12) Minnesota (5-6, 2-6) – Minnesota lost to Northwestern 24-14. QB Tanner Morgan turned the ball over 3 times that led to 10 points for the Wildcats. Mohamed Ibrahim rushed for 98 yards and TD and LB Blake Cashman had a sack and a career high 20 tackles for the Gophers. On a positive note, WR Tyler Johnson caught a late TD pass and eclipsed the 1000 yard mark for the season. The Gophers will have to win the Paul Bunyan Axe against Wisconsin to become bowl eligible.

UP NEXT: Minnesota plays at Wisconsin Saturday at 3:30 p.m.

13) Illinois (4-7, 2-6) – Illinois lost to Iowa 63-0. Illinois was only able to gain 220 total yards on the day while turning the ball over four times to the Hawkeyes. The loss matched the largest margin of defeat in Illini history. The last time occurred in 1906 to the University of Chicago. The loss ended Illinois bowl hopes for this season. AJ Bush was 12 of 28 for 82 yards and had 2 INT. The worst news is that Reggie Corbin seemed to re-aggravate the ankle injury that took him out of the game the week before. He left the game after just one carry.

UP NEXT: Illinois plays at Northwestern Saturday at 3:30 p.m. on BTN.

14) Rutgers (1-10, 0-8) – Rutgers lost to Penn State 20-7. Rutgers wasn?t able to get on the scoreboard until the fourth quarter when Raheem Black-shear punched in a two-yard TD run. Blackshear ended up with 102 yards on 22 carries. Art Sitkowski was ineffective going three for seven for 18 yards and 2 INT before being pulled for Giovanni Rescigno. The change in QB didn?t matter as the Scarlet Knights couldn?t find a way to beat Penn State.

UP NEXT: Rutgers plays at Michigan State Saturday at 4 p.m. on FOX