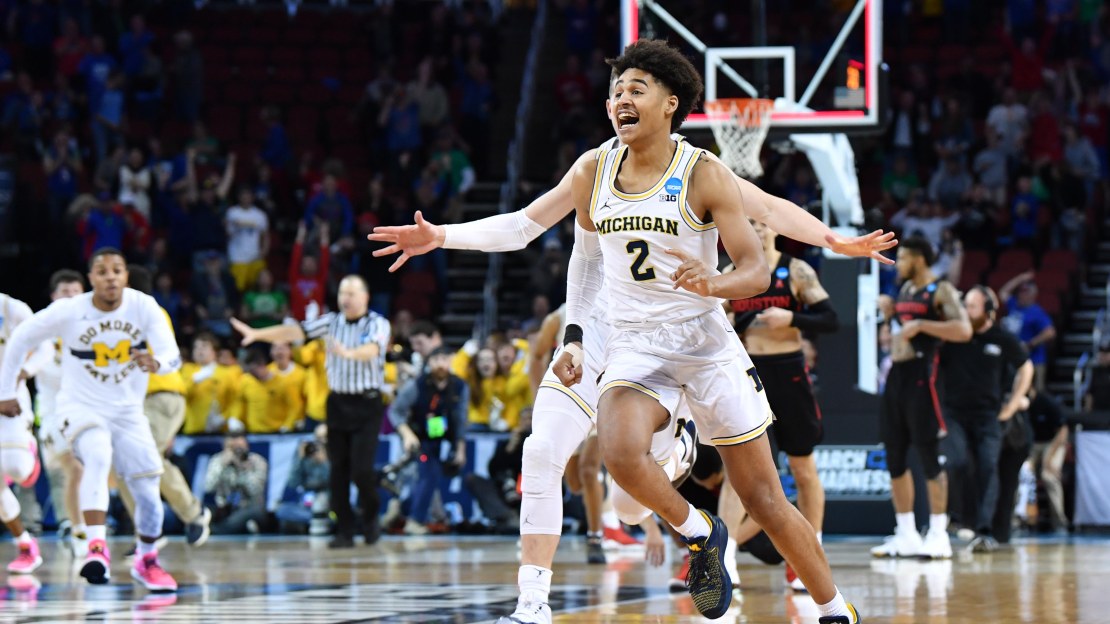 One team was supposed to be here. The other, not. But what we have in Michigan vs. Texas A&M is and intriguing Sweet 16 clash between two traditional football schools.

How crazy has this NCAA tourney been? No. 3 seed Michigan is the highest seeded team left on its side of the bracket (South and West regions), as No. 1 seeds Virginia and Xavier already have been dumped along with No. 2 seeds North Carolina and Cincinnati. No. 3 Tennessee also is gone.

Many felt the Wolverines would be playing No. 2 North Carolina in the Sweet 16. But Texas A&M has crashed the party, knocking off No. 10 Providence and then blasting the defending national champ Tar Heels, 86-65. The Aggies have been here before, making the Sweet 16 in 2016, 2007 and 1980. A&M is just 22-10 overall and went 9-9 in the SEC,but it is hitting its stride at the right time and won?t be an easy out.

Michigan needed a miraculous last-second shot from freshman Jordan Poole to beat No. 6 Houston in the second round after opening with a victory vs. No. 14 Montana. When a team wins a game like Michigan did in the second round, you get the feeling it could be in store for a magical run. Last year almost was magical for Michigan, as the Wolverines lost a close one to Oregon in the Sweet 16. That was a Ducks squad that advanced to the Final Four. In 2013, Michigan played Louisville in the national title game.

The Wolverines are in the Sweet 16 for the fourth time in six years. Another fun fact: Four Michigan teams have reached the 30-win mark: 1988-89 national champs; 1992-93 Final Four Fab Five team; 2012-13 national runner-up … and this year's club. The winner will play the winner of No. 9 Florida State vs. No. 4 Gonzaga for a Final Four berth on Saturday.

Know A&M: This game offers a marked contrast in styles, as A&M is big, physical and post-oriented. Conversely, Michigan plays positionless basketball with interchangeable parts. The Aggies were a chic pick to win the SEC and ranked as high as fifth in the nation at one point this season after opening 11-1, but injuries and suspensions have had a negative impact. And then there was the matter of five straight losses from late-December into January and, in mid-February, three consecutive losses as A&M finished tied for seventh in the SEC. But Texas A&M has now won five of six. The Aggies are an athletic team that has four players who average double-figures in scoring: Tyler Davis (14.5 ppg), Admon Gilder (12.4), DJ Hogg (11.1) and Robert Williams (10.4). No wonder A&M is No. 3 in the SEC in scoring (73.0 ppg). But this isn?t a great shooting team. Texas A&M is dominant on the glass led by the 6-10 Williams, who leads the SEC in rebounding (9.2) and ranks No. 2 in blocks (2.6). The 6-10 Davis nets 9.0 rebounds per game for coach Billy Kennedy, who is in his seventh season in College Station.

Key player: Charles Matthews has been a key guy thus far in the Big Dance for Michigan. The Kentucky transfer leads the team with a 15.5 scroring average. Muhammad-Ali Abdur-Rahkman has been good on both ends, ranking No. 2 in scoring with an 11.5 average while playing good defense. Still, keep an eye on Matthews, who is hot and matches up well with the Aggies. With Michigan outmanned down low, wing players like Matthews need to excel.

Key number: 34.5, opponents? field-goal percentage. Defense has been a calling card for the Wolverines under John Beilein. And point man Zavier Simpson leads the way. He needs to set the tone. That defense must excel vs. a Texas A&M club that works inside-out, dominating down low by grabbing offensive rebounds while clogging the lane, cleaning the glass and blocking shots on defense. Can Michigan-more of a finesse team-handle the physical Aggies? No doubt, for the Wolverines to win, Moe Wagner needs to play well facing the basket.