Dot Commentary: Who will win the Big Ten Tournament? 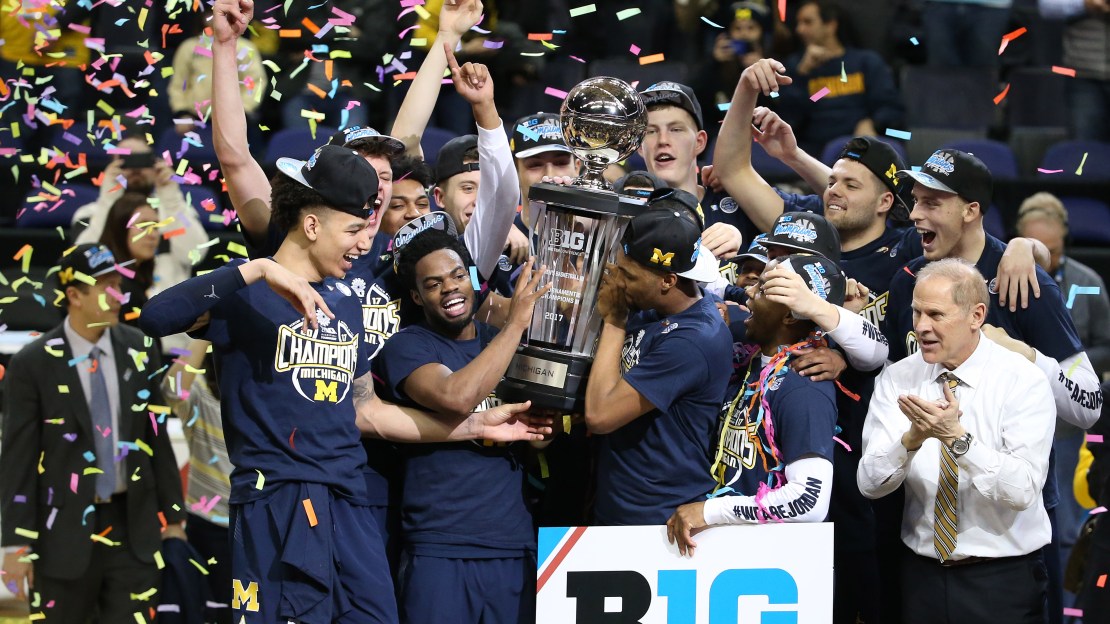 Well, almost. We can count the remaining days in the Big Ten basketball regular season on one hand, and the Big Ten Tournament in New York City awaits us on the other side of this weekend. It's been a fun season of healthy debate and mild takes here with Dot Commentary, and we've got at least one more topic to toss back and forth before the season wraps up.

The latest question for the BTN.com team of Tom Dienhart and Alex Roux might be the simplest one we've bantered about all season, and it's one we'll actually be able to prove in just over a week:

Who will win the 2018 Big Ten Tournament?

Last year, Michigan had one of the most remarkable runs in Big Ten tourney history. After almost opting not to attend the tourney after their plane careened off the runway on the way to the Big Ten tourney last season, Michigan arrived in Washington as a No. 8 seed and promptly won four games in four days to win the event. It was a Wolverine squad that had a steely resolve. And I see things shaping up in a similar fashion this season for Michigan.

That?s right: I think Michigan will make a run to the 2018 Big Ten tourney title when the event kicks off next week in New York City. The Wolverines are playing some of the best ball in the conference, peaking at the right time of the season. John Beilein?s crew has won four in a row, coming off one of its most impressive wins of the season on Wednesday, when the Wolverines won at Penn State. Before that, Michigan whipped Ohio State. Michigan finishes at Maryland this weekend.

This squad is playing with a swagger, with Moritz Wagner, Charles Matthews, Muhammad-Ali Abdur-Rahkman, Duncan Robinson, Zavier Simpson, Isaiah Livers and Jordan Poole leading the way. So much talent, so many options. While many focus on white-hot Michigan State, surprising Ohio State and powerful Purdue, but don?t forget about Michigan. This is a surging team that is hitting its stride. And it will win the Big Ten tourney ? again.

Way to go out on a limb, right? Hey, they're the Big Ten Champs for a reason, and when you look at the three conference title contenders through Thursday, Michigan State is playing the strongest as we head toward when it matters most.

Purdue has had a fantastic season, and their 19-game winning streak was the best stretch of basketball we've seen this year. But the Boilers haven't been nearly as dominant as of late, being pushed in their last six games while dropping three of them. Some of that has to do with an injury to Vince Edwards, and you can't blame them for leaking some gas a bit near the end of a grinding campaign. Same with Ohio State, who has lost two of its last four.

But Michigan State? They're the proud owners of an 11-game winning streak, and while the Spartans haven't been dominant in all those wins, the current college basketball landscape has proven anyone can get got on any given game day. Meanwhile, Michigan State hasn't lost in over a month.

Between Miles Bridges, Cassius Winston, Nick Ward, Jaren Jackson and a whole stable of talented role players, I dare anyone to argue they don't have the most talented top-to-bottom roster in the Big Ten.  Maybe the country.

And if they do win the Big Ten Tournament like I'm predicting, their defense will likely carry them home. According to kenpom.com, Michigan State is the best team in the country at defending field goals, leading the nation in defensive effective FG percentage (42%), 2-pt FG percent defense (37.6%) and block percentage (19.1%). Plus, they shoot threes better than anyone in the country at a 42.1% clip.

Oh, and that whole "Tom Izzo Teams Thrive in March" narrative might have some merit.