Another big one in the Big Ten: No. 3 Purdue at No. 4 Michigan State 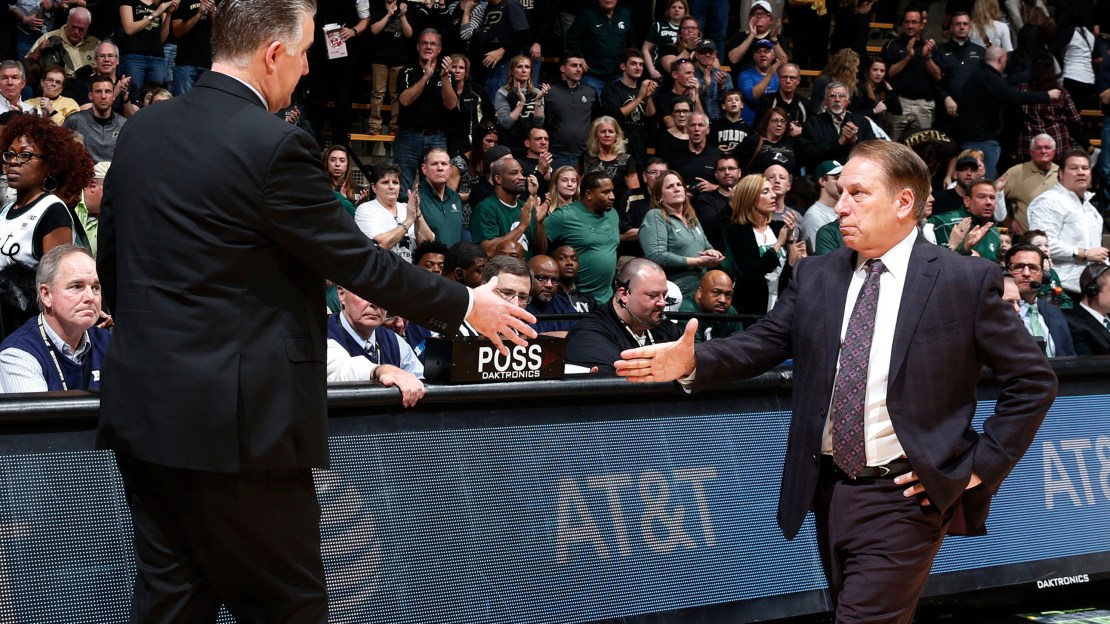 Wednesday night gave us an epic showdown in West Lafayette, Indiana, as Ohio State came to Mackey Arena and emerged with a huge 64-63 victory to forge a first-place tie with Boilermakers atop the Big Ten standings at 12-1. The Boilermakers saw their 19-game winning streak come to an end vs. Ohio State, which has won 11 of 12 games; the lone loss in that span came after Penn State hit a miracle 3-pointer at the buzzer that banked in.

Saturday gives us Part II of this monster week in the Big Ten, as No. 3 Purdue plays at No. 4 Michigan State in another game with massive league title implications. This is the only scheduled meeting between the schools.

What will be the mindset and psyche of the Boilermakers coming off their first loss since Thanksgiving? Is the swagger gone? This team lost its dominating edge in the three-game run-up to the Ohio State defeat. Now what?

Michigan State (23-3) won't be fazed by the magnitude of a big game. It already has played in two matchups of top-five teams this season. During their second game this season, the then-No. 2 Spartans lost to then-No. 1 Duke. As the No. 3 team in late November, MSU blew out then-No. 5 Notre Dame.

Purdue (23-3) has been on a stage this big once in 2017-18 ? and it flopped on Wednesday vs. No. 14 Ohio State. Now, the Boilermakers must try to get on track in what will be a loud and hostile environment in East Lansing. Purdue has won three of the last four meetings, prevailing at MSU last year.

Here's a look at Saturday's big matchup in the Breslin Center in East Lansing.

What's on the line?

Purdue: A win would allow the Boilers to stay even in the loss column with Ohio State in their pursuit of a second consecutive Big Ten crown. It also would help restore some mojo for a team whose chances to win-out look good with games left at Wisconsin, vs. Penn State, at Illinois and vs. Minnesota. If Purdue topples the Spartans and wins out–and OSU loses down the stretch–the Boilers would be sole Big Ten champs. Even with a loss at MSU, Purdue still could share the Big Ten title if it wins out and OSU loses one time down the stretch (At Penn State? At Michigan?) And, no doubt, a strong finish also could solidify a No. 1 seed in the NCAA tourney for the Boilermakers.

Michigan State: With two Big Ten defeats (at Ohio State; vs. Michigan) already on the books, another loss would put a serious dent in the Spartans' hopes to win their first Big Ten title since 2012. MSU already has fallen at home once, getting beaten by Michigan, 82-72. Since then, Michigan State has won seven in a row. Even with a win, the Spartans would need to win out (at Minnesota; at Northwestern; Illinois; at Wisconsin) and hope Ohio State slipped somewhere down the stretch (At Penn State? At Michigan?) in pursuit of at least a tie for the Big Ten title. An outright Big Ten crown seems like a long shot.

Purdue: This is a skilled offensive team that can beat an opponent inside or outside. There are five players who have the green light to shoot 3-pointers ? and all five can be deadly. Muscular guard Carsen Edwards can be a one-man gang, attacking the hoop or swishing 3-pointers. He's fearless. Inside, the Boilermakers have a 7-2, 290-pound aircraft carrier named Isaac Haas who is unlike any player in the nation. The senior is a difficult to stop if he catches the ball on the blocks, and he's adept at passing out of double-teams. It is an absolute must for Haas to avoid foul trouble if the Boilermakers want to win.

Michigan State: There is talent galore, especially up front in players like Nick Ward, Jaren Jackson Jr. and Miles Bridges. And Joshua Langford is a dynamic wing. The Boilermakers can't match the athletic ability of Michigan State along the front line. MSU needs to dominate the glass, limiting second-chance points for Purdue while generating them for its offense. The Spartans also have the depth to wear-down the Boilermakers, whose bench lacks much punch. In the loss to Ohio State, Purdue received no points from its reserves. In fact, just four players scored in the entire game.

What to worry about?

Purdue: Rebounding. It's about positioning, awareness and want-to more than size and height. But this team just isn't good at it. And it cost Purdue in the loss to Ohio State, which grabbed not one, not two, but three offensive rebounds before finally sinking the winning shot in the waning seconds on Wednesday. Bad news: MSU is No. 1 in the Big Ten in rebounding margin (+10.4). Another issue: Shooting. Purdue has an array of marksmen, but the Boilers haven't shot well from 3-point range of late. Since hitting 55 percent (11-of-20) vs. Michigan, the Boilers hit 27 percent (5-18) vs. IU; 31 percent (7-22) vs. Maryland; 33 percent (7-21) vs. Rutgers; 33 percent (6-18) vs. OSU. No way Purdue wins without shooting well from beyond the arc.

Michigan State: With one more win, MSU would be off to its best start in school annals. But, this doesn't feel like a 23-3 team. Before the season began, many hailed this to be Tom Izzo's "most gifted team ever." But the Spartans have been plagued with inconsistency. The poor play in the first half of many games has been vexing. Time and again, MSU has had to rally in the second half. And this has at times of late looked like a tired and worn-down team, as perhaps the off-court headlines have taken a toll.