Dot Commentary: Who is the best post player in the Big Ten? 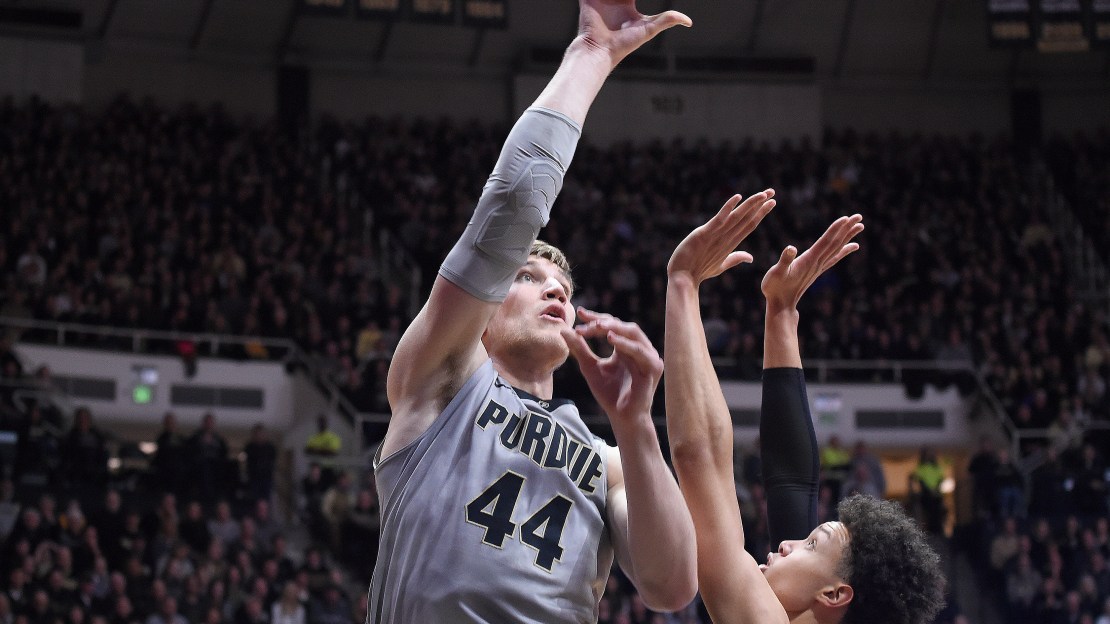 The demise of the big man has been greatly exaggerated.

While basketball has undoubtedly evolved toward a more wing-friendly style of play, post players remain essential for success on many teams in college hoops. And the Big Ten has no shortage of beasts who feast in the post.

That leads to our latest Dot Commentary question for the BTN.com team of Tom Dienhart and Alex Roux to ponder:

Who is the best post player in the Big Ten?

The best post player in the Big Ten? It has to be Purdue's Isaac Haas. The guy is unlike any other player in the conference-if not the nation. The 7-2, 290-pound Haas is a physical force that no one can match up with, a monolith in the paint who at times is unstoppable when he catches the ball in the post and attacks the basket with his left shoulder. Trying to guard him one-on-one is often a futile exercise.

And Haas has gotten better working off of the frequent double-teams he faces. His biggest area of improvement: passing out of double-teams, as Haas has become proficient at spotting open shooters on the perimeter. Working inside out, the Boilers can be tough to stop on offense. The senior is averaging 14.7 points and 5.3 rebounds-up from 12.6 and 5.0 last season–for a Boilermaker squad that is tied for first in the Big Ten with a 12-1 mark as it enters a huge game at Michigan State on Saturday.

He was at his best during a three-game run in January when he scored 24, 26 and 20 points consecutively. Purdue will need Haas to be dialed-in like that down the stretch if it hopes to repeat as Big Ten champ and make the program's first Final Four since 1980, when another Purdue big man led the charge in Joe Barry Carroll.

Of all the Dot Commentary topics Tom and I have chewed on this year, this one might be the toughest to pick. The Big Ten has better bigs than a Potbelly sandwich shop with guys like Nick Ward, Jordan Murphy, Mike Watkins, Isaac Haas and Bruno Fernando, among others. It wouldn't surprise me if all of those names ended up on NBA rosters at some point. But I'm going with Wisconsin big man Ethan Happ, who has carried the Badgers through a difficult season and has done just about everything for them on both ends of the floor.

Despite his lack of any discernible jump shot, Happ dominates three primary box score columns by racking up points, rebounds and assists. And while his 17.4 points and 8.5 rebounds per game averages are both good enough to land him in the top six of both categories in the conference, it's his proficiency at sharing the ball (3.8 assists per game) that helps set him apart.

Happ regularly draws double and triple-teams down low, and for good reason. But he's so effective at passing out of them that it's often a pick your poison for opponents. Happ assists on 34 percent of his teammates' made field goals when he's on the floor–a figure that jumps to over 38 percent in Big Ten play, which is second-best in the conference. With court vision like that, it's not surprising that point guard duties have been taken over by the 6-foot-10, 235 pound Illinois native from time to time.

The Illinois native is commanding the post for @BadgerMBB: pic.twitter.com/MziRV13TQP

Take Thursday night's game against Illinois as an example of Happ at his best. Utilizing footwork that could land him on Dancing With The Stars if he wanted, Happ racked up 27 points, six rebounds, eight assists, three blocks and two steals in the Badgers' 78-69 win–an overwhelming effort against a team that doubled him all night. And even though the wins have been rarer than in recent years for the Badgers, stat lines like those for Happ haven't been–he's only scored in single figures twice all year as he's almost literally put an injury-plagued team on his back.

Yeah, Wisconsin has struggled this season. But can you imagine where they'd be without him?