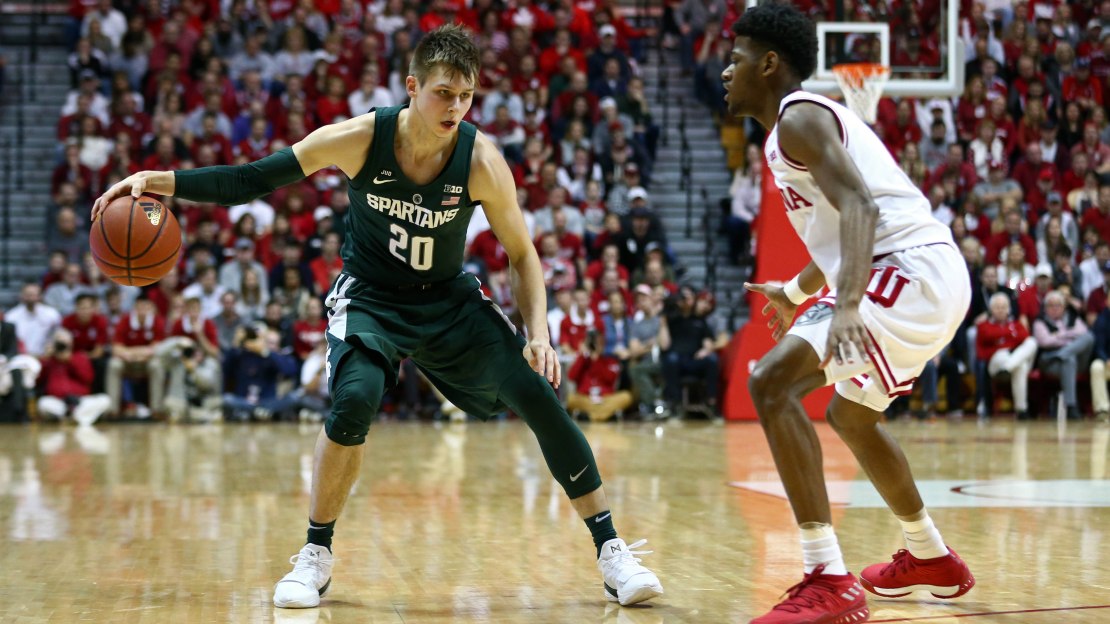 BLOOMINGTON, Ind. (AP) Matt McQuaid scored 12 points and made the decisive 3-pointer with 1:08 to play Saturday night, leading No. 5 Michigan State past Indiana 63-60.

The Spartans (22-3, 10-2 Big Ten) have won six straight to stay two games behind Purdue in the conference title chase.

Juwan Morgan had 23 points and 11 rebounds for Indiana (12-12, 5-7), which has lost four straight overall. Freddie McSwain Jr. finished with eight points and 16 rebounds.

Indiana, which lost to the Spartans 85-57 earlier this season, had a chance to force overtime, but Devonte Green's 70-foot heave bounced high off the back of the rim as the buzzer sounded.

It was deliberate, old-school basketball at its finest.

The teams regularly went deep into the shot clock, and Michigan State eventually hung on because of size and defense.

Despite shooting a season-low 28.8 percent from the field, the Hoosiers sure made it tough.

Indiana trailed 58-50 with 5:05 left before Morgan scored seven straight points to get the Hoosiers within one. After Miles Bridges missed a 17-footer on Michigan State's next possession, Indiana had a chance to take the lead. But Robert Johnson's layup rolled out and McSwain missed two free throws after grabbing the offensive rebound.

McQuaid's final 3 made it a four-point game and after Green's three-point play with 3.7 seconds to go made it 63-60, the Hoosiers got one last chance when Joshua Langford missed two free throws.

Langford and Jaren Jackson Jr. each had 10 points and Jackson finished with seven blocks.

Michigan State: Offensively, the Spartans struggled. But defensively, they showed just how good they can be with their size and length. Just eight minutes into the game, Michigan State had eight blocks. It finished the half with nine with 13. The only downfall was that the Hoosiers took advantage of second chances and managed to keep it close.

Indiana: After getting blown out by the Spartans on Jan. 19 in East Lansing, the Hoosiers inserted McSwain into the starting lineup and turned it around. No, they didn't get the win. But the young Hoosiers showed how much they had learned from the first matchup and they can go toe-to-toe with any team.

Michigan State: Bridges finished with seven points and eight rebounds. …. Langford had 10 points. … The Spartans pushed their single-season school record for blocks to 204. … Michigan State was 9 of 18 on 3s and 8 of 17 on free throws.

Indiana: Morgan recorded his seventh double-double of the season. … The Hoosiers made only 2 of its first 22 shots, 9.1 percent, and went more than 8 1/2 minutes in the first half without a basket. …Indiana had a 53-29 rebounding edge including a 25-3 advantage on the offensive end against the best rebounding team in Division I. … The Hoosiers have played three straight ranked opponents.

Michigan State: Will try to extend its winning streak Tuesday at Iowa.

Indiana: Plays the fourth and final game during an eight-day span Monday at Rutgers.