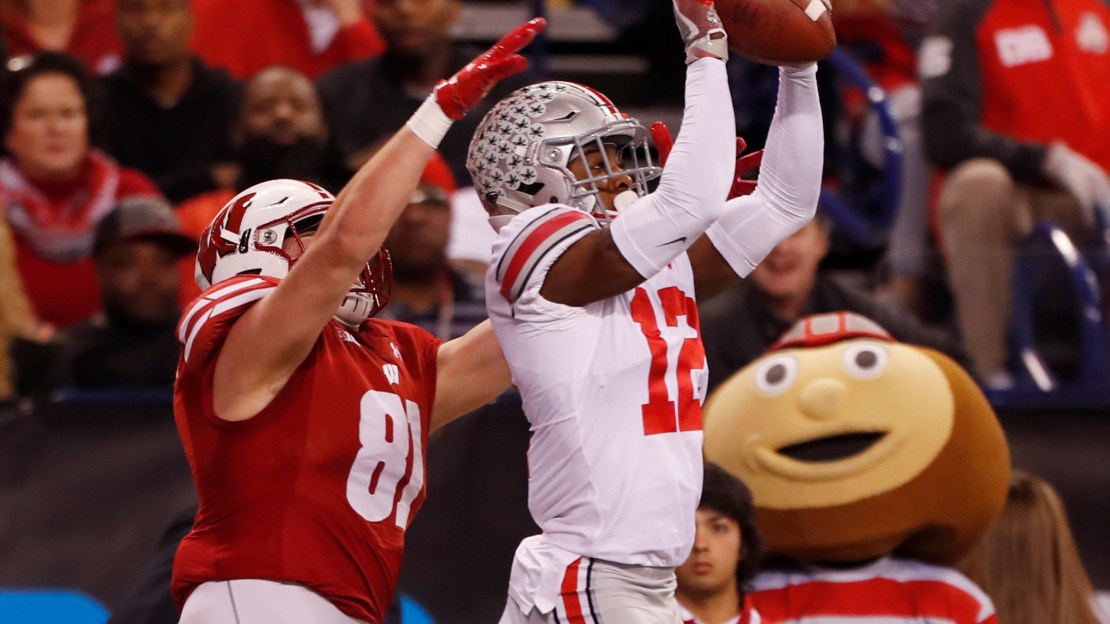 The deadline for underclassmen to declare for the NFL draft has passed, as a record 106 players have been granted special early eligibility for the 2018 draft. The previous record for early entrants was 98 in the 2014 draft.

It was no shock to see Penn State running back Saquon Barkley turn pro. He is expected to be a top 5 pick in the 2018 draft. Iowa cornerback Josh Jackson and Ohio State cornerback Denzel Ward also project to be sure-fire first-round picks. Ohio State defensive end Sam Hubbard also could slip into the first round.

Here is a look at the Big Ten's early draft entrants, listed alphabetically. The NFL draft will take place April 26-28 in Arlington, Texas.

LB Jerome Baker, Ohio State. He was part of a standout Buckeye defense, pacing the team with 72 tackles. Baker's athletic ability made him impactful from sideline to sideline. He was a consensus honorable mention All-Big Ten choice last season.

RB Saquon Barkley, Penn State. He finished fourth in the Big Ten in rushing (97.8 ypg), running 217 times for 1,271 yards last season en route to being named Big Ten Running Back of the Year. His 18 rushing TDs led the Big Ten. He also caught 54 passes for 632 yards and three scores. On top of all that, Barkley ran back two kickoffs for TDs last season en route to pacing the Big Ten in all-purpose yards with 2,329. He leaves State College as the school's all-time leader in rushing TDs and all-purpose yards. Barkley also had 671 career carries for 3,843 yards and 43 TDs.

WR Simmie Cobbs, Indiana. It was a blow-but not a shock-to see this big, productive target turn pro. He was second in the Big Ten in catches with 72 that went for 841 yards and eight TDs. Cobbs leaves campus with 139 career receptions (eighth in IU history) for 1,990 yards (ninth) and 12 TDs to go along with seven 100-yard receiving games.

C James Daniels, Iowa. A versatile blocker who can play guard or center, Daniels is as good an athlete as you'll find among linemen. He helped pave the way for some strong Hawkeye rushing attacks over the years as the latest standout blocker from Iowa City. Daniels was consensus honorable mention All-Big Ten in 2017.

OT Nick Gates, Nebraska. There wasn't much to cheer about in Lincoln in 2017, but Gates provided a few highlights with his blocking. He was consensus honorable mention All-Big Ten.

DE Sam Hubbard, Ohio State. He was a consensus second-team All-Big Ten honoree who opted to turn pro. Hubbard formed a formidable duo with E Nick Bosa, ranking second on the team in sacks with eight and second in TFLs with 13.5. Hubbard was part of line that helped Ohio State rank No. 3 in the Big Ten vs. the run (105.1 ypg), notching 42 tackles in 2017. The 2.9 yards per carry allowed were the fewest in the league.

CB Josh Jackson, Iowa. He opted to turn pro after a sensational junior season that saw him lead the nation in passes defended with 26 and also pace the nation in interceptions with eight. Jackson ran back two picks for touchdowns. He earned consensus All-American honors and was named the Big Ten Defensive Back of the Year.

QB Tanner Lee, Nebraska. The Tulane transfer is bolting early to the NFL after what was a strong junior season-his only one slinging passes in Lincoln. Lee finished second in the Big Ten in passing (261.9 ypg), hitting 57 percent of his attempts for 3,143 yards with 23 TDs. But he did pace the Big Ten with 16 interceptions.

WR D.J. Moore, Maryland. He was a sensation, leading the Big Ten with in catches (80) and yards (1,033) while adding eight scoring grabs in 2017, doing it all without his starting or backup quarterback for almost the entire season. As a result, Moore earned Big Ten Receiver of the Year honors. His 80 receptions set a new Maryland single-season record. Moore was consistent for the Terps, ending his junior campaign having started 35 straight games and making a catch in 33 consecutive contests.

CB Nick Nelson, Wisconsin. In his only season at Wisconsin following his transfer from Hawaii, Nelson was a star. A big, physical corner, Nelson made 35 tackles with a team-high 21 passes broken up, which ranked No. 2 in the league. He also doubled as a punt return man, averaging 8.6 yards per return with a TD. Nelson was consensus first-team All-Big Ten.

CB Denzel Ward, Ohio State. The star cornerback opted to turn pro early after earning first-team All-Big Ten honors from the media and second-team from the coaches. Ward ranked third in the Big Ten in passes defended with 17 and had two picks. He helped the Buckeyes rank No. 5 in the Big Ten in pass defense (195.9 ypg). Bottom line: Ward was a shutdown corner.

DT Eddy Wilson, Purdue. He had what best can be described as a "mercurial" career in West Lafayette. Wilson could be very effective at times, as he has athletic ability that belies his size. But let's just say he wasn't always dialed-in. But with defensive tackles always overvalued, Wilson could get a look from some NFL teams. Good ones are hard to find.