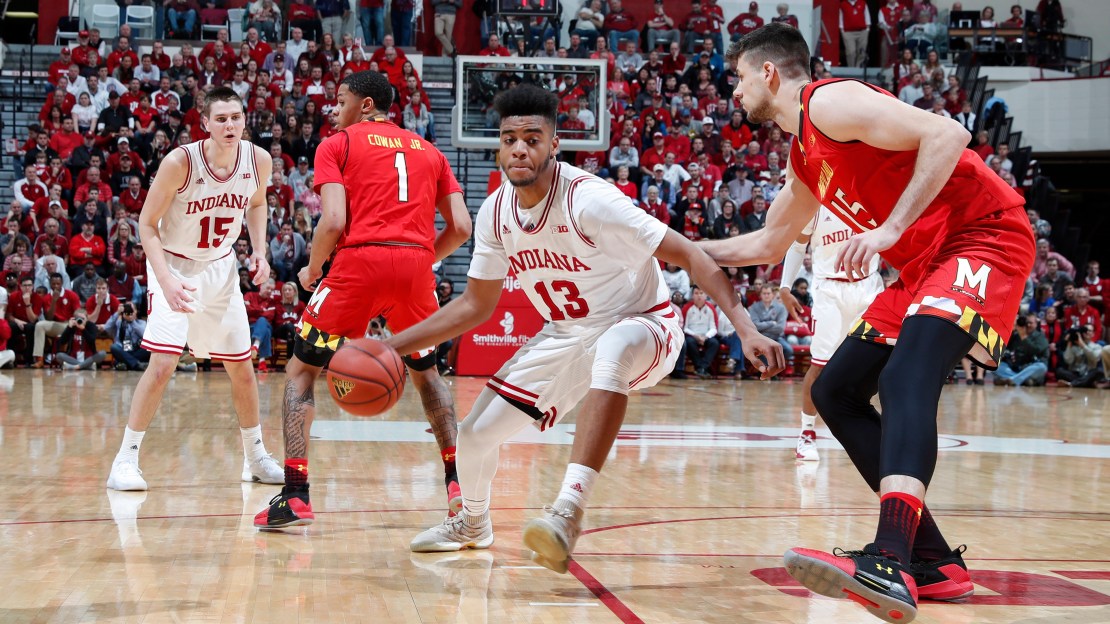 (AP) Juwan Morgan spent most of the weekend getting treatment on his injured right ankle and hoping he could play Monday night.

He did more than the Indiana Hoosiers could have expected.

Morgan was back to being his old self. After missing the final 22 minutes Friday, he scored 25 points, grabbed five rebounds, dished out four assists, blocked two shots and accounted for all but four points in the decisive run to lead Indiana past Maryland 71-68.

Regardless of the circumstances.

He played 36 minutes, was 10 of 18 from the field and was the only Indiana player to shoot better than 50 percent from the free-throw line (5 of 7). And he almost single-handedly rallied the Hoosiers with a closing 14-6 run that erased the Terrapins' five-point lead.

The result: Indiana (12-8, 5-3) won for the fourth time in five games overall and earned its fifth straight win at Assembly Hall.

"We were just sort of waiting for him (Morgan) in the first half to see if he could find his way through the game," coach Archie Miller said. "You turn your ankle and a lot of guys handle it different ways. I think Juwan kind of played through the adrenaline tonight."

But Morgan got plenty of help, too.

It was barely enough.

Anthony Cowan Jr. scored 18 points and Kevin Huerter had 16 points and 11 rebounds to lead Maryland (15-7, 4-5), which hasn't won a conference road game since Dec. 3 at Illinois. Cowan had a chance to tie the score with six seconds left but it bounced off the rim.

Huerter could have tied with a half-court heave but the refs waved it off, ruling the shot came after the buzzer. It was an air ball anyway.

"We competed our tails off there in a tough environment," coach Mark Turgeon said. "We had a stretch there where we couldn't score but we never stopped trying. Just got play a little bit better. They were great defensively."

But they couldn't close it out.

Morgan's layup and three-point play tied the score, Johnson's layup made it 64-62 with 3:15 left and Morgan made sure the Terrapins never led again.

Maryland: The Terrapins are going down a tough road. After losing in the final second last Monday at Michigan and now blowing a five-point lead in the final five minutes at Indiana, Maryland has lost four straight conference road games. To make a late-season push, Turgeon's team needs to find a knockout punch.

Indiana: The Hoosiers continue to steadily improve this season, and this one typified just how much progress they've made. At times, the Hoosiers' defense confounded Maryland. And when the Terrapins started making shots, the Hoosiers had an answer each time. It kept the game close enough that a strong finish put them over the top.

Maryland: Freshman Bruno Fernando did not the play the final 15 minutes after spraining his right ankle. Turgeon did not have an immediate update after the game…. The Terrapins were 4 of 13 on 3-pointers in the second half after starting 5 of 10. … Maryland outscored Indiana 16-2 on second-chance points, 26-10 off the bench. It also had a 39-28 rebounding edge.

Indiana: Zach McRoberts had seven points, four rebounds, three steals and three assists. … The Hoosiers shot 56.3 percent in the first half but only led 42-39 at halftime. … Indiana wound up with 10 steals and went 9 of 16 from the free-throw line. …The Hoosiers forced 18 turnovers and a 40-22 scoring advantage in the paint and a 20-14 edge in points off turnovers.

"It's a tough year for us. We just have to keep battling," Turgeon said. "We're getting better. We just weren't good enough tonight offensively on our execution to win this game."

Indiana: Travels to Illinois on Wednesday.