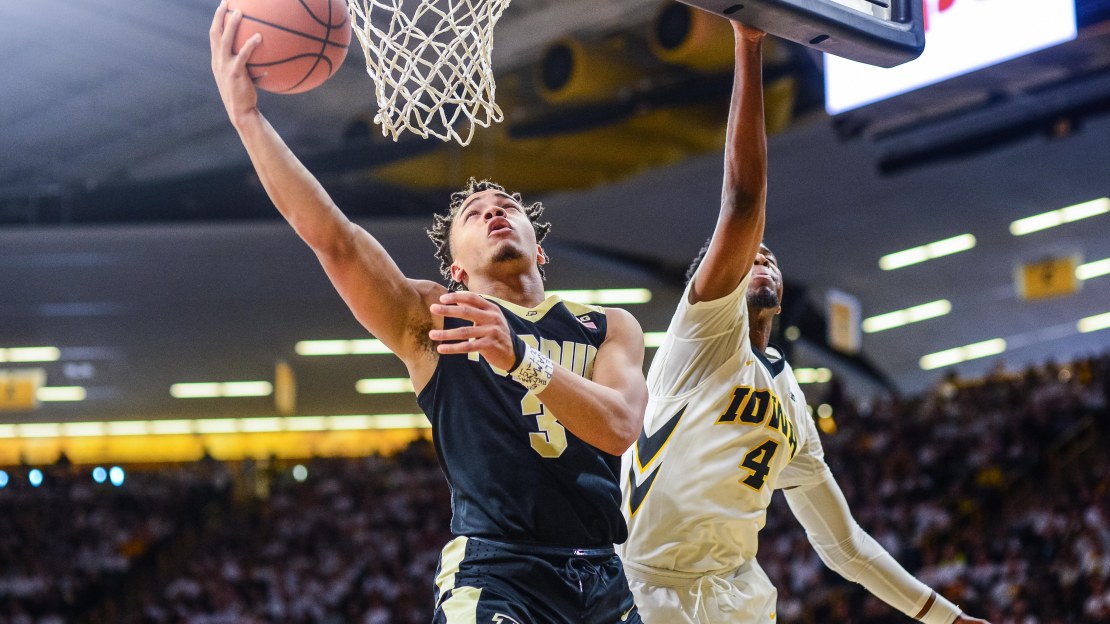 (AP) It had been seven years since Purdue won in Iowa City.

It took less than seven minutes to ensure that losing skid would end, as the third-ranked Boilermakers unleashed a record-setting performance from 3-point range against the woeful Hawkeyes.

Carsen Edwards scored 22 points and Vincent Edwards had 19 Saturday, leading Purdue to its 15th straight victory with an 87-64 rout of Iowa.

"We're much better when we just take whatever they give us and play off of our instincts. We have some really good passers. We have some guys that can shoot but we have guys who can pass the basketball," Boilermakers coach Matt Painter said.

Purdue never left the outcome in doubt either, reeling off 18 straight points to lead 24-6. The Boilermakers extended their lead to 24 late in the first half after hitting 10 of 11 3s in one stretch and were up 51-20 at halftime.

Purdue shot 69 percent in the first half while holding the Hawkeyes to 25 percent. Carsen Edwards also had a career-high eight assists without a turnover.

Luka Garza had 19 points for Iowa, which has dropped five of its last six. The Hawkeyes went on a late 13-3 run to prevent the final margin from becoming even more lopsided.

"Purdue, they have a special team. They have played well this year. They're 19-2 for a reason. They shoot it, they can throw it inside, and they can share it. I think it's hard when they have that many seniors all who want to be recognized and play unselfishly," Iowa coach Fran McCaffery said.

Purdue: The Boilermakers have Ohio State on their heels in what has become a two-team race for the Big Ten title. But after this performance against the Hawkeyes, it's hard to call anyone but the Boilermakers the favorite.

Iowa: This was the first game the Hawkeyes played all year against a ranked opponent, and the Boilermakers exposed them. Iowa remains one of the nation's most disappointing teams – but this was perhaps the worst the program has looked since the three-year stint of Todd Lickliter last decade.

The Hawkeyes honored former star Chris Street, who died in an auto accident midway through his junior season on Jan. 19, 1993, before the game. Among those in attendance were Street's parents and his former coach, Tom Davis.

Purdue's previous high for 3s in a game was 18 against Vermont in 2015, and its largest lead was 37 early in the second half. …The Boilermakers made 17 of their first 24 3s. ….Purdue essentially did to Iowa what it did to Wisconsin in its last game. The Boilermakers beat the Badgers by 28, matching Wisconsin's biggest defeat in 16 seasons. …Iowa's best player, sophomore Tyler Cook, was held to just six points and two rebounds.

"We got outplayed by a really good team. They've been doing it to everybody. We have to learn from it, move on, and keep grinding," McCaffery said.

POLL IMPLICATIONS: Purdue will likely be ranked third – its highest spot in the poll since being ranked No. 2 on March 7, 1988 – for the second straight week row unless top-ranked Villanova or No. 2 Virginia lose this weekend.