Meet the Indiana professor who will change the way you think about poetry: BTN LiveBIG 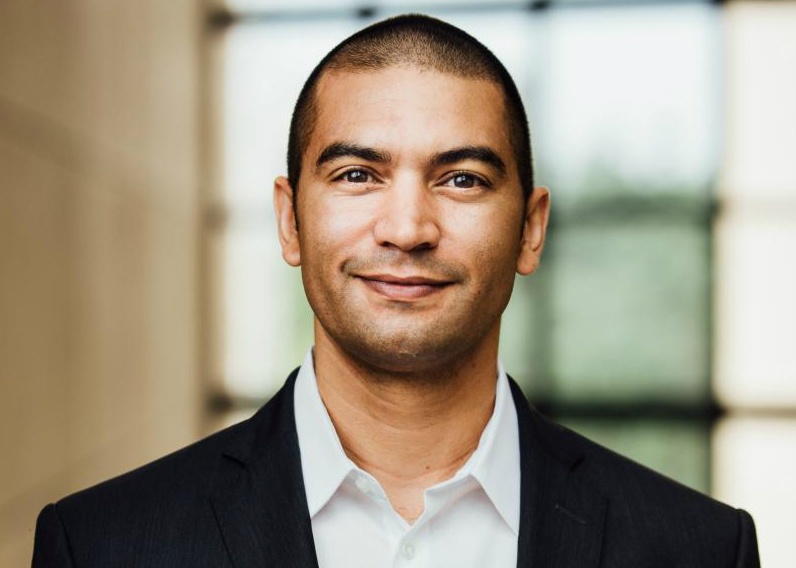 This year, he made history.

On January 1st, the author and poet became Indiana?s first black poet laureate. A review of his work makes the designation seem almost inevitable. After growing up in the suburbs of Indianapolis, he earned a B.A. from Indiana University and an MFA from Southern Illinois University-Carbondale. Since then, he?s released four award-winning books of poetry, including The Big Smoke, about boxer Jack Johnson, and last year?s Map to the Stars. In addition to a new book of poems (currently titled Hearing Damage), he?s working on a sequel to his book about Johnson – this time in the form of a graphic novel.

As poet laureate, Matejka intends to bring more attention to Indiana?s poets and introduce the form to newbies. Over the next two years, he?ll create programming in conjunction with the Indiana Arts Commission and the Indiana Humanities.

Last month, BTN LiveBIG talked to Matejka about his vision for his new role, balancing his status as a poetry ambassador with his own work and how Indiana shaped his life.

BTN LiveBIG: You?re Indiana's first black poet laureate. Is there any extra layer of representation or responsibility that you feel charged with in doing this work?
Adrian Matejka: I think that there's a combination of obligations there. On the one hand I have an obligation to the art of poetry, which I love so much and is very deeply rooted in the tradition of black poetry, the Black Arts Movement. Then there's the other maybe more political part of it which is what does it mean to be the first of anything? To be the first to do any kind of thing is always a different kind of obligation. I hope that I'm able to do a good job and represent poems in the way that I see them. Hopefully that will be, for at least some folks, an education in poets they might not have been exposed to.

BTN LiveBIG: Who are some of the Indiana writers you hope to showcase?
Matejka: It spans back to the 60s where Etheridge Knight, who's one of the great black arts movement poets, and Mari Evans who's another great poet from that time, had been in [Indianapolis, IN] doing work that was both artistic and community oriented. The work they did was high level poetry but they also had another side to the work which was meant to be outreach, and meant to be discovered by and received by readers who might not always think that poetry was written for them.

BTN LiveBIG: How do you balance your personal voice, which is where a lot of art generally comes from, with having to represent the state as a whole.
Matejka: Yeah. I think to write poetry, the act of writing poetry is a very personal act. It's a very personal movement from self to the page. Charles Wright, who was the poet laureate of the United States sometime back said, "Poetry is language that sounds better and means more." I always think about poetry that even though it's deeply personal there's also something about it that's just fundamental about language at play.

Many of the choices that I make, especially now after coming home, are informed by the landscapes that I'm familiar with in Indiana. There's an urban landscape in my poems now but it's Indianapolis urban not Chicago urban. I guess if I was going to try to create some long metaphor of what Indiana is to me it's this strange combination of agrarian and urban and how that's modulated changes from parts of the state.

BTN LiveBIG: When you were named poet laureate, you said "We need poetry to remind us of the beauty that still surrounds us despite all of the seemingly unending anger and strife." But you've said in other interviews that all art is political and that's especially true of poetry. How do you balance beauty and political critique?
Matejka: I think about the poet laureate position as being an opportunity to share poems, the big picture of poems. Not mine but just the ideas of poetry and what poetry can be for us and what it can do. Then I have a separate agenda that includes some of that for my own writing but mainly I'm still trying to figure out what I don't know in poems. Sometimes that is political, and sometimes it's personal, and sometimes it's about art. I guess I'm thinking about the poet laureate position as being more like a teacher and standard bearer of poems. Let me get out here and be the poetry Johnny Appleseed or something. That is not the same thing as what I'm trying to do in my own writing.

BTN LiveBIG: You're teaching in Indiana?s MFA program. How do you teach somebody to sort through that themselves?
Matejka: The best way to learn voice is to write. You just write. You write a letter to yourself telling yourself everything you want to do. Then eventually you take that letter and you write it in line breaks. Eventually you take that letter that written in line breaks and break everything out of it that sounds like a letter. It's this constant conversation with the self. The language that's appearing on the page is the same kind of language you want to hear. I don't know if anybody's ever given me better advice than to try to write the kind of poem I want to read.

BTN LiveBIG: Does that factor into the way that Indiana University approaches its program?
Matejka: Our MFA program is amazing. It was the second program founded in the country so it's very old, first of all. [Laughs] We've been doing this in Bloomington for a long time. There have been [people] teaching in or graduated from our MFA program, writers who have won just about everything you could win: MacArthur Genius grants and Pulitzers, and National Book Awards, all of it.

I mean this and it's going to sound super hippie: There's something about Bloomington that atmospherically improves writing. You sit there and something in the air makes you a better writer. I don't know what it is. It's not the pollen because it makes me sneeze all the time, but there's something about this place that is deeply ingrained. A deep entrenchment of support.

BTN LiveBIG: You're also working on a new collection of poems called Hearing Damage. What is that book about?
Matejka: It's about being a dad. I've been trying to figure out … my last book, Maps to the Stars, there's a lot of text devoted to the fact that my biological father wasn't around when I was a kid.
Even having a model of what you don't want to do can be useful. ?My dad used to do this to us and I'm never going to do that to my kid.? This book Hearing Damage is really meditating on it. I'm working on it, I'm not in any big hurry. I'm going to spend at least the next six months finishing the graphic novel I've been working on so it's finally done.