Power Rankings: Fresh off emphatic upset, Ohio State checks in at No. 3 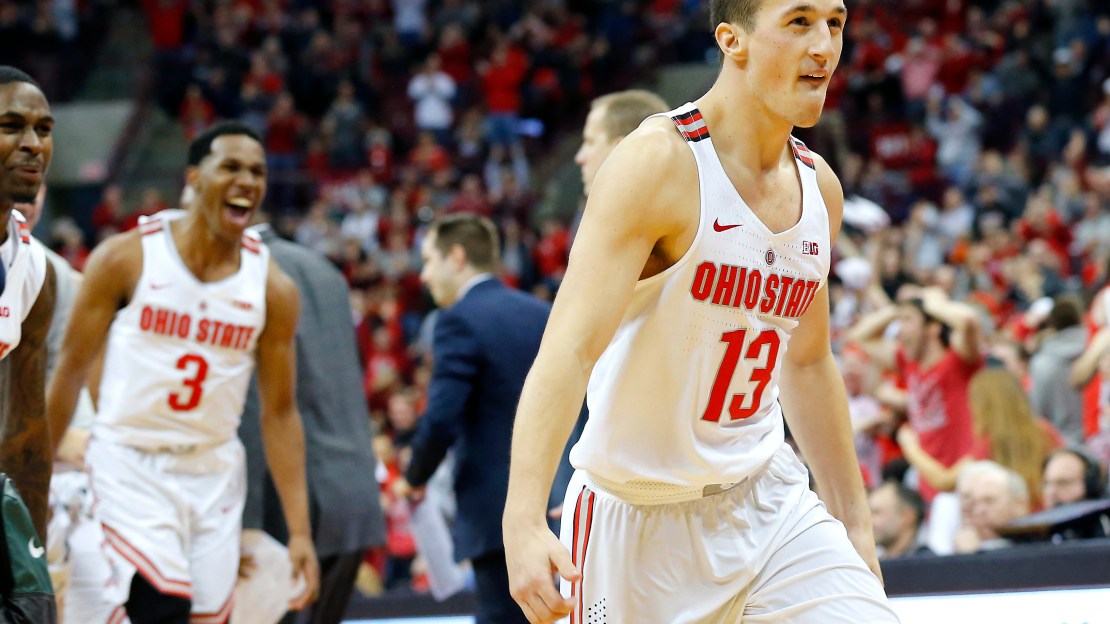 Happy New Year, Big Ten Basketball fans. Just when I thought the top 2 in my Big Ten Power Rankings, presented by ArcelorMittal, were safe, Ohio State completely dismantles the No. 1 team in the country. While it's impossible not to take notice of what's happening in Columbus, I don't let one game alter my perspective too much.

Here's how I see it, and why. Don't hate me for trying to be rational.

1. Michigan State (15-2, 3-1). The Spartans looked vulnerable Sunday, but I still think they're the best team in the country from top to bottom. They'll be better because of the loss to Ohio State, but it's a reminder that no one is unbeatable. The youth of this team was exposed when it got down, as patience in the process was sacrificed to individuals trying to win by taking over at times. This happens when the pressure of expectation settles in.

2. Purdue (15-2, 4-0). The Boilers have been impressive in every way. Regardless of the two losses in the Bahamas, they have always been a top 10 team in my opinion. Finally, the rest of the country is taking notice, as they jumped to T-No. 5 in the AP poll. Their balance makes them a tough matchup for anyone. As they continue to improve defensively, they could become the Big Ten's second legitimate Final Four contender.

3. Ohio State (13-4, 4-0). I know Buckeye fans may be upset with this, considering they are undefeated in conference play and fresh off a demonstrative win over Michigan State, but I can't immediately make the move up for them yet. The turnaround has been tremendous, and the development of Keita Bates-Diop, who we all knew was a star, gives them a true go-to guy in close games. Chris Holtmann has done a terrific job with this team, and it appears the excitement for hoops is back in Columbus.

4. Michigan (14-3, 3-1). The Wolverines are really starting to figure themselves out. The point guard play has been much-improved, with Zavier Simpson emerging as the guy, and the play of Isaiah Livers and Jordan Poole gives them much-needed depth and balance off the bench. This team will continue to improve as the season progresses.

5. Maryland (14-4, 3-2). Mark Turgeon will figure out how to maximize the potential of this injury-depleted bunch. He may be a better coach when given less talent. Kevin Huerter and Anthony Cowan will need to be playmakers, and will need to make their teammates better – particularly Bruno Fernando, who has a terrific upside.

6. Minnesota (13-4, 2-2). The Gophers were already lacking depth, even with Reggie Lynch and Amir Coffey on the floor. The hope is that Coffey will be back at some point this season, but this is a completely different team without Lynch anchoring the defense. The dynamic will change in every way, and Richard Pitino will have to establish new roles in order for this team to stay in the postseason race. I have them at 6 at the moment, but can see them continuing to slide down with two key players out.

7. Nebraska (11-6, 2-2). This is a dangerous teams on the verge of being really good. The key is in getting their best offensive lineup on the floor as much as possible with Isaiah Roby, Isaac Copeland, James Palmer Jr., Anton Gill and Glynn Watson Jr. all being able to attack from anywhere on the court. It may be a risk to play a small lineup, but it also may give you the best opportunity against any opponent.

8. Penn State (12-5, 2-2). When the Nittany Lions figure out that they are more talented than 75 percent of the league, and when the execution and belief match that expectation, they could be a top 5 team in the conference. Tony Carr has to make his team better, too. He is one of the best players in the league, but there are times when there is better movement and balance with Jamari Wheeler on the floor.

9. Indiana (9-7, 2-2). Losing Deron Davis makes being competitive in conference play an even tougher task for the Hoosiers, although playing Juwan Morgan at the 5 spot may make this team a tough matchup. Archie Miller has won with small lineups before, and I expect him to do the same with what he's got now. Seeing Robert Johnson play well should excite IU fans as well.

10. Northwestern (10-7, 1-3). The potential is still there for this team to turn it around, however the mental toughness of some could be in question. Clearly this is a better team with Bryant McIntosh healthy, but I think Scottie Lindsey is a huge key to turning it around. He has not appeared to be playing with confidence, and when he has played well the past two years, Northwestern has had success.

11. Wisconsin (9-8, 2-2). The Badgers will do what they do and will keep themselves in games. Ethan Happ has been terrific, as expected, and I do believe he is developing confidence in his young teammates. The bottom line is that this team is simply limited, due to injuries and having to rebuild after losing four key starters from last year. Have patience as Greg Gard will get this program back to where it has been in recent past.

12. Illinois (10-7, 0-4). The Illini may be the toughest team to play in conference this year. They play hard, and they play with a tempo, intensity and grit that is intimidating and hard to plan for. That being said, realizing the potential of Brad Underwood's system will take time. I'm excited to see what this program will become under his leadership.

13. Rutgers (11-6, 1-3). I still feel like the Scarlet Knights are so close to taking a big step forward, and I thought they were with the win over Seton Hall in December. This team has to continue to learn how to win. Winning is not just making shots, it's doing everything right in practice to build good habits that consistently put you in position to succeed. Steve Pikiell will get them there, but it will take time.

14. Iowa (9-9, 0-5). The Hawkeyes are better than they are playing, but it doesn't seem like they realize it. Fran McCaffery knows it, but the toughness on the floor from a mental standpoint is just not there yet. The ceiling for this young and talented team is still high, however without confidence and swagger each loss will hurt more and more.