Best of the week that was: Ohio State makes big statement 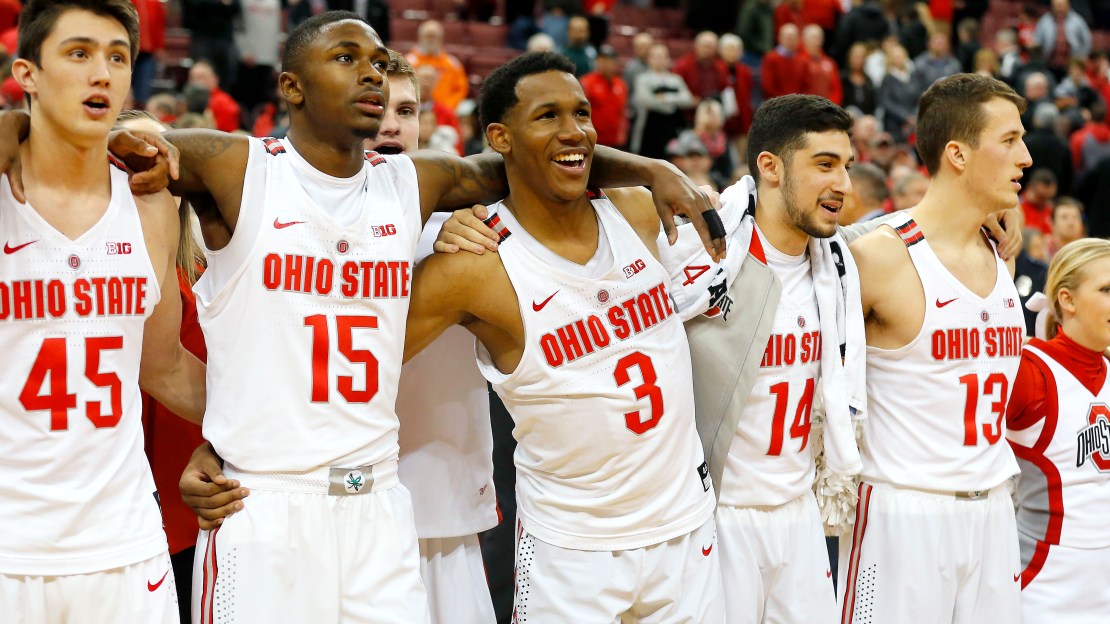 The Big Ten race is heating up, and, to the surprise of many, it's Ohio State and Purdue tied atop the Big Ten standings. The undefeated Buckeyes handed No. 1 Michigan State its first Big Ten defeat in a blowout Sunday night.

Here is a look at the best of the week that was.

Biggest surprise: Ohio State. The Buckeyes dominated No. 1 Michigan State, 80-64, to complete a 2-0 week and tie Purdue atop the Big Ten standings. The Spartans entered the game looking practically unbeatable, but Keita Bates-Diop and company had little trouble vs. Tom Izzo's crew. Ohio State opened the week with a 92-81 win at Iowa, where it had lost six of its last 11. Don't look now, but the Buckeyes are 4-0.

Biggest disappointment: Northwestern. The season is threatening to go off the rails just a year after that Cinderella run to the program's first NCAA tourney. The Wildcats have turned into pumpkins, losing two in a row and three of four games and sit 10-7 overall and 1-3 in the Big Ten. Scoring and stopping scoring have been issues.

Best win: Ohio State 80, No. 1 Michigan State 64. Nothing more needs to be said. Next category, please.

Best player: Keita Bates-Diop, Ohio State. The breakout star averaged 29.5 points, 10 rebounds, two steals and 1.5 blocks in wins at Iowa and vs. No. 1 Michigan State, the team's first win over a top-ranked team since 2007. Bates-Diop was efficient, too, shooting 58 percent.

Best stat: 17, consecutive double-doubles to start the season for Minnesota's Jordan Murphy, tying former Wake Forest star Tim Duncan's NCAA record. Murphy added two more double-doubles this past week, going for 17 and 17 in a win vs. Illinois and 18 and 10 in a loss vs. Indiana. Speaking of Indiana, here's another stat worthy of mention: Robert Johnson (28 points), Juwan Morgan (20) and Justin Smith (20) accounted for all but seven of the Hoosiers' points in their 75-71 win at Minnesota.

Best stat line: Penn State's Lamar Stevens had himself a day in a home win vs. Northwestern on Friday. Stevens tallied a career-high 30 points, on a Bryce Jordan Center-record 14 field goals (14-of-19; 74 percent), and added five rebounds, two assists and a steal in a 78-63 triumph.

Best dunk: Isaac Copeland posterized Purdue's Isaac Haas with a powerful one-handed slam late in a loss in West Lafayette on Saturday. Copeland stared at Haas after his thunderous slam, resulting in a technical foul. Not to be ignored, Maryland's Bruno Fernando put on an individual dunk contest in Sunday's win vs. Iowa. Check out these back-to-back oops.

Best shot: Rutgers' Corey Sanders drilled a deep 3-pointer to help clinch a 64-60 win vs. Wisconsin. It was a money shot in crunch time to help the Scarlet Knights earn their first Big Ten win.

Best moment: It was pretty cool to see Purdue's "Three Amigos" back at Mackey Arena on Saturday. Troy Lewis, Todd Mitchell and Everette Stephens were part of a special era in Boilermaker annals in the mid-1980s, leading the program to back-to-back Big Ten titles in 1987 and 1988.

The "Three Amigos" were back in Mackey today to celebrate our newest @BoilerBall banner addition to the rafters… Todd Mitchell! #BoilerUp pic.twitter.com/Fe0748Oblu

Did you see this? Iowa coach Fran McCaffery was ejected from Tuesday and Sunday's games vs. Michigan and at Maryland, respectively. It was an epic tirade vs. the Wolverines, as he called a timeout and provided a volcanic tongue lashing. This meltdown set a new standard for a coach who is famous for blowing his stack. The ejection at Maryland happened quickly, and was the result of a few missed calls, in McCaffery's mind, including Anthony Cowan getting away with an elbow to the back of Cordel Pemsl's head.