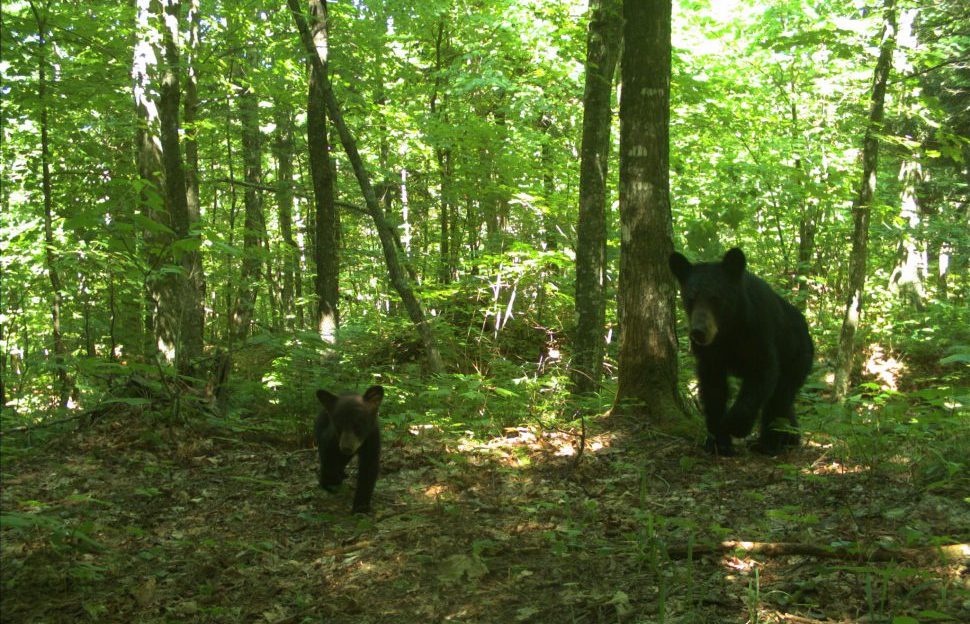 A raccoon slowly and deliberately pads by on the way back to its den. A tom turkey's wattle jiggles as he pecks at the ground for grubs and other tasty morsels. A while later, an inquisitive black bear ambles into frame and stops. Something is different in her world, she notices. She sniffs at the camouflaged box strapped to the trunk of the old growth sugar maple tree. She nudges it with her snout.

Unbeknownst to our bear and other assorted woodland creatures, this incognito box isn't some piece of detritus left behind by errant outdoorsmen. Rather, it is a high-tech motion-triggered camera dispatched in service of an unprecedented study of biodiversity being undertaken by researchers at the University of Michigan.

"What we are studying is carnivore community ecology and the carnivores of Michigan in particular," says Dr. Nyeema Harris, principal investigator on the study, "species like black bear, bobcat, coyote, lots of different weasels, grey fox, red fox, skunks and raccoons."

At four different sites across the state, from the remote wilds of the Upper Peninsula to suburban Detroit, Harris and her team have installed hundreds of cameras capable of surreptitiously capturing images of a wide variety of woodland life, as well as recording the ambient temperature and moon cycle. The goal is to conduct a sort of census, as it were, of the carnivore population of Michigan's shrinking forests and the toll that human expansion into these areas is having.

"It's important because we know that landscapes are changing; changing because of us," states Harris, an assistant professor of Ecology and Evolutionary Biology at the University of Michigan. "If we're studying where species are occurring and, how they're behaving, what their activities are across these different habitats and kinds of conditions we have in Michigan, it's going to help inform us about the sensitivity that species might have as people continue to spread throughout these environments."

At sites like the 13,000-acre Huron Mountain Club in the Upper Peninsula or the UM Biological Research Station in the rural northern part of the Lower Peninsula, Harris and her team trek deep into the woods, over mountains and across streams, to place cameras in carefully chosen spots. In order to decide which tree or glade would prove fruitful, Harris notes that the team has to think like the animals they're hoping to spot.

"We're trying to understand how the animals are using the particular landscape," she says. "We are moving through the habitat, to some extent, like the animals would. The reason we're doing that is because animals utilize the area differently. There's different body sizes, if you're talking about a bear versus a fox. If we're going to capture them all on camera, we need to make sure that our camera is positioned well enough to capture that variation. So sometimes we have to get on all fours and say, 'Alright, right now I'm a fox.'"

Tracking animals across the state is, however, only the first part of the project. As the cameras used are motion-activated, each one will capture hundreds of images during its span of use. Those images range from innocuous plant life moving in a breeze to snapshots of carnivorous creatures in search of a meal. Sorting through all of these images is a herculean task, says Harris, so the team is turning to citizen-scientists to help, through a crowd-sourcing platform they have created called Michigan ZoomIN. 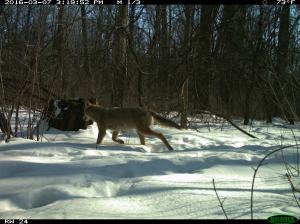 "Because we have so many images, we don't have the capacity, ourselves, to identify hundreds of thousands of pictures," she explains, noting that process includes sifting through image after image, filtering out those that contain no wildlife or wildlife not germane to the study. "We need the public to help us identify the images for us to be able to get the data out."

With the relatively recent addition of sites in the Metro Detroit area, the study has the unique opportunity to more directly track how carnivores adapt to urban and suburban environments. These sites are also unique in their size and diversity.

"Detroit is going to be interesting because unlike our other study areas where we have a single contiguous piece of land, that's not the case in Detroit," Harris explains. "In Detroit, we have 26 different parks scattered all around the city. Some are these really teeny neighborhood parks that just have a swing set and five trees, and we're putting a single camera there."