Dienhart: An extremely early look at the 2018 Big Ten East 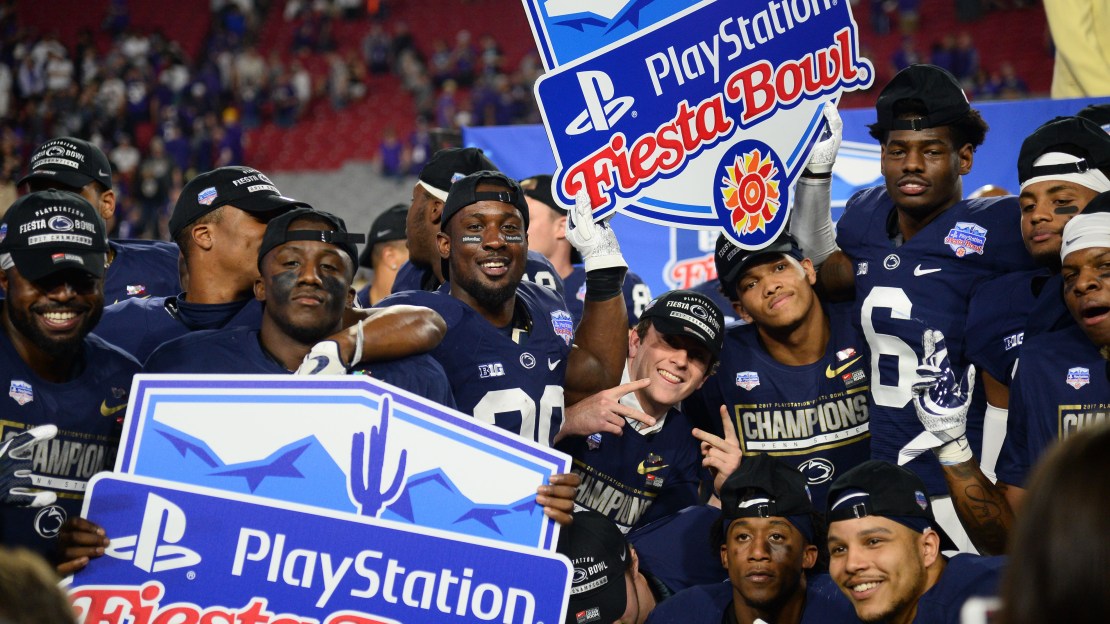 It's never too early to start looking ahead to the 2018 season. So, here is an early, early, EARLY look at how I think the Big Ten East will stack up.

1. Penn State
Good: QB Trace McSorley is the proverbial straw that stirs the drink who will operate an offense that teems with talent. He is a legit Heisman contender. Ohio State and Michigan State visit State College.
Bad: Transcendent talent Saquon Barkley is gone from the backfield along with all-time leading wideout DaeSean Hamilton. Ricky Rahne is the new OC. Is he ready to sit in the big boy chair?

2. Ohio State
Good: The play in the trenches on both sides of the ball should be excellent, even with Billy Price and Jamarco Jones gone. RB J.K. Dobbins is just getting started. The defense should be off the hook with DE Nick Bosa back. OSU will have a chip on its should after that playoff snub. Michigan comes to the Horseshoe.
Bad: All-time great QB J.T. Barrett is gone. Who will bail out the offense on third downs? Will the passing game have teeth? The secondary will miss Denzel Ward and Damon Webb. The Buckeyes visit Penn State and Michigan State.

4. Michigan
Good: Stop me if you've heard this before: The defense should be ferocious with studs like E Rashan Gary, E Chase Winovich, LB Devin Bush and viper Khaleke Hudson. Nice options at RB led by Karan Higdon. The pass-catchers are young and promising led by Donovan Peoples-Jones.
Bad: What exactly is the offensive identity? The quarterback spot was largely a black hole in 2017. Is Brandon Peters the guy? How about Ole Miss transfer Shea Patterson? Will the offensive line improve, especially vs. quality foes? Time to dominate up front.

5. Maryland
Good: Few coaches have recruited better than DJ Durkin since he arrived in College Park prior to the 2016 season. The QB spot can't be as devastated by injury as it was in 2017, can it? There are plenty of options at running back with Ty Johnson and Lorenzo Henderson.
Bad: Better play is needed on the offensive and defensive lines. DJ Moore was the Big Ten's top wideout in 2017. Who will step up with him gone? And LB Jermaine Carter leaves a big hole. Josh Woods and JC Jackson leave voids in the secondary. Lots to prove overall on defense.

6. Indiana
Good: The offensive line should be strong. And promising QB Peyton Ramsey is only going to get better. IU should be hungry after seeing a two-year bowl run end.
Bad: Many key cogs from an underrated defense are gone, including LBs Chris Covington, Tegray Scales and CB Rashard Fant. And the offense loses stud WR Simmie Cobbs, who left early for the pros, as well as TE Ian Thomas.

7. Rutgers
Good: Chris Ash continues to improve the talent as he enters his third season. Even with Gus Edwards gone, there are options at running back. The offensive should be solid led by T Tariq Cole. The secondary should be strong.
Bad: The offense will be on its ninth coordinator in nine years. It's an understatement to say quarterback play must improve. The defense has to get tougher vs. the run. Losing Sebastian Joseph and Kemoko Turay up front doesn't help.