Dienhart: 'The Big Ten made a big statement in this postseason' 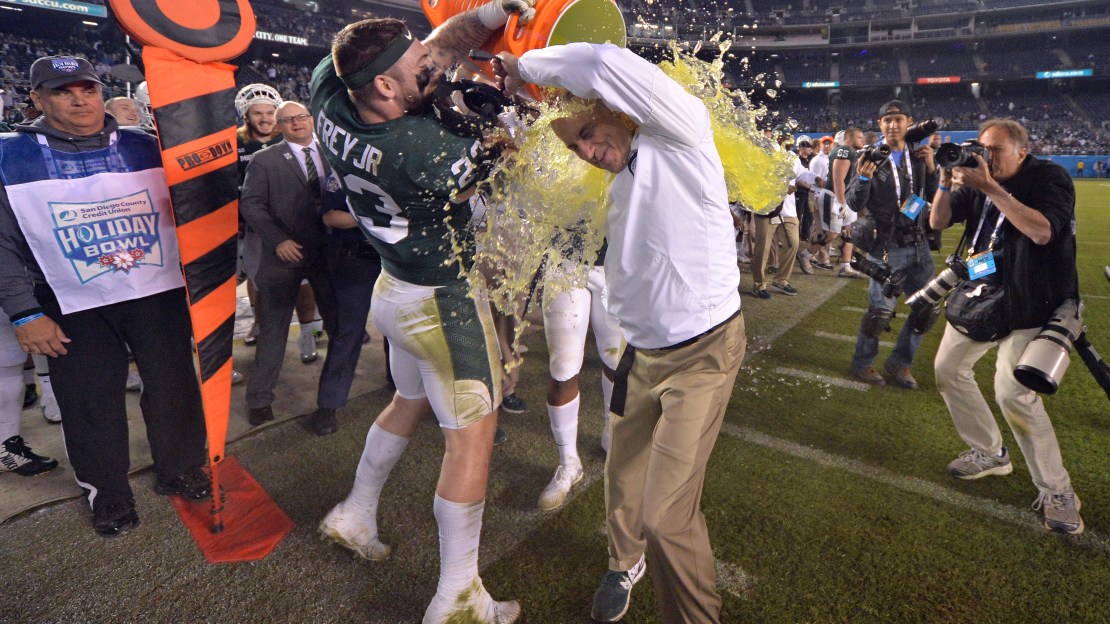 With another bowl season behind us – a highly successful one, at that – we decided to pick BTN.com senior writer Tom Dienhart's brain about the conference's 7-1 performance.

What did the collective effort do for the Big Ten's perception? Which was was most impressive? And how will it impact the conference in preseason polls?

Get our full Q&A below.

BTN.com: What did this 7-1 bowl season do for the Big Ten's brand, reputation?
TD: It helps, no doubt. There are just two chances each year to compare leagues: non-conference play and the bowl season. It's put-up-or-shut-up time in December. And the Big Ten made a big statement in this postseason, which was needed since the league was shut out of the College Football Playoff.

BTN.com: Which Big Ten bowl win was the most pleasant surprise?
TD: While the wins by Penn State (Fiesta vs. Washington) and Wisconsin (Orange vs. Miami) were great, I have to go with Ohio State's victory vs. USC in the Cotton Bowl. I think it was important for the Big Ten champ that got snubbed for a spot in the playoff to win its bowl. Even better: The Buckeyes took down a USC squad that was the Pac-12 champ.

BTN.com: If you had to pick the most impressive win, which would it be?
TD: No doubt, for me, it was Penn State taking down Washington in the Fiesta Bowl. The Huskies entered the game with one of the best defenses in the nation. And the Nittany Lions eviscerated the U-Dub defense with 545 yards of offense. QB Trace McSorley doesn't get enough credit. He is the straw that stirs the drink for Penn State. And he was sensational in this game (342 yards passing) and should be a top Heisman contender in 2018. Kudos to RB Saquon Barkley, too. While some top NFL prospects skip bowls, Barkley suited up and excelled (137 yards rushing; seven catches) to further cement his status as an all-time Penn State great. It all was enough to make me wonder: Were the Nittany Lions the best team in the Big Ten this season?

BTN.com: Whose win did the most to help its 2018 preseason ranking?
TD: Michigan State. The Spartans enjoyed a stunning reversal of fortunes, going from 3-9 to 10-3. And Michigan State did so with a roster dominated by youngsters. Players like RB LJ Scott, QB Brian Lewerke, WR Felton Davis III, DE Kenny Willekes, LB Joe Bachie and CB Josiah Scott, among others, figure to be back next season. The best seemingly is yet to come for Mark Dantonio's crew. Could MSU win the Big Ten East? Maybe. Michigan and Ohio State both come to East Lansing, but MSU goes to Penn State.

BTN.com: Speaking of the preseason rankings, how many Big Ten teams do you see being in the top 10?
TD: Penn State, Ohio State, Wisconsin and Michigan State should be in the Top 10. I really like Penn State and Michigan State. And if Alex Hornibrook picks up where he left off in the Orange Bowl, the Badgers will be just as good next season as they were in 2017 with RB Jonathan Taylor leading the way. Ohio State needs a new QB but has a lot of other top talent back-RB J.K. Dobbins, WR Parris Campbell, G Michael Jordan, DE Nick Bosa, among others–to buffer the transition from the J.T. Barrett era. Dwayne Haskins looks promising.

BTN.com: How about top 25?
TD: I think you'll see Michigan and Northwestern joining Penn State, Ohio State, Wisconsin and MSU in the preseason polls. Coming off a five-loss season, the Wolverines probably have too many questions on offense to merit a preseason ranking but may still garner a spot from 20-25 based on reputation and potential. Eager to see Ole Miss transfer Shea Patterson, assuming the quarterback is eligible. The Wildcats will have QB Clayton Thorson back and many key parts on defense. RB Justin Jackson will be missed, but Jeremy Larkin looks good. Iowa also could sneak in behind QB Nate Stanley.

BTN.com: Will the Big Ten get a team in next year's playoff?
TD: I think so. This season was an anomaly. In fact, I never thought the Big Ten would be shut out of the playoff.

BTN.com: Which team has the best shot?
TD: Penn State. I think the Nittany Lions have been the best team in the Big Ten the last two years. This season, PSU's two losses came by a combined four points in road defeats at Ohio State and Michigan State. Since losing at Michigan in September 2016, Penn State has gone 20-3 with the losses coming by a total of seven points. Yes, RB Saquon Barkley and WR DaeSean Hamilton are gone, but QB Trace McSorley is back working behind a veteran line with RB Miles Sanders and WR Juwan Johnson. The defense also looks formidable. Keep your eye on PSU, which finally could break through to the playoff in James Franklin's fifth season — even as the program transitions offensive coordinators from Joe Moorhead to Ricky Rahne.