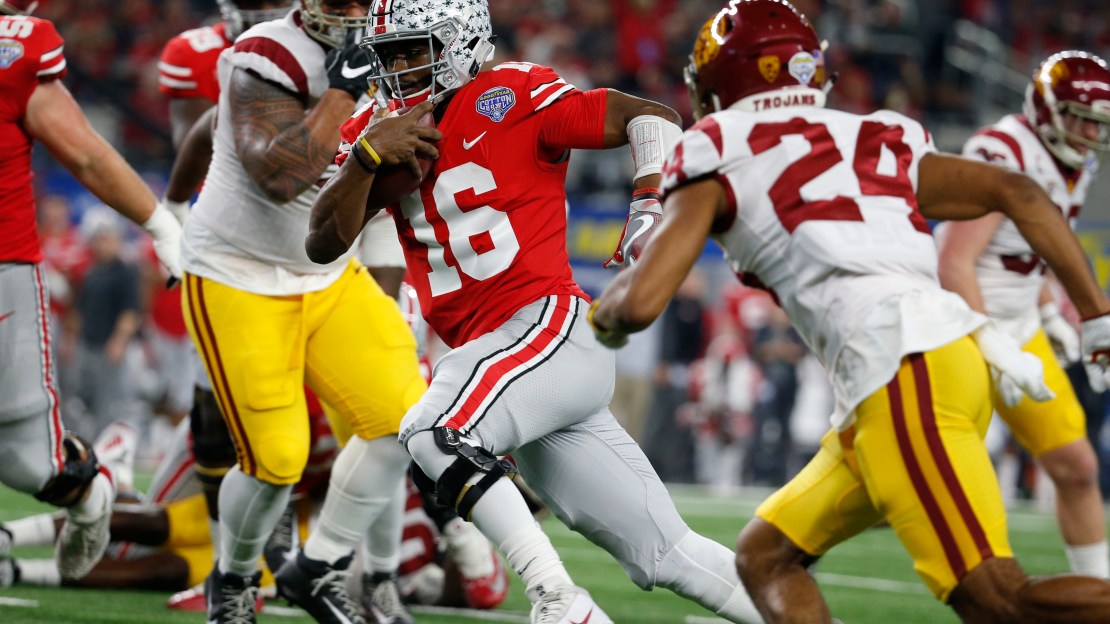 Some felt Ohio State should have earned a playoff berth after winning the Big Ten. But the Buckeyes were left on the curb in favor of Alabama, which didn't even win its division in the SEC.

Tonight, Ohio State showed that it was playoff-worthy with a dominating 24-7 victory vs. Pac-12 champ USC. Ohio State raced to a 24-0 lead in the second quarter and never looked back. It was a fitting way for Buckeye senior quarterback J.T. Barrett to finish a spectacular career as an all-time Big Ten great.

BEST OF THE COTTON BOWL

Best play: Let's go with the pick-six by Ohio State's Damon Webb in the second quarter. It was a demoralizing event for a USC squad that already was losing 10-0. A defensive score like this was crippling to the psyche of the Trojans, who never recovered.

If only there was a term for an unexpected enemy wreaking havoc in Trojan territory… ?? https://t.co/7SOAZffMiG

Best player: J.T. Barrett. The Buckeye signal-caller did a little bit of everything-as he usually does. He ran for a team-high 66 yards with two TDs and hit 11-of-17 passes for 114 yards, becoming the Big Ten's all-time leader in total offense. Add that to his already long list of records. Barrett will leave campus as one of the greatest players in Big Ten history. And he also will leave as Cotton Bowl champ.

What a career. Take a bow, J.T. pic.twitter.com/z73cOPuGJG

Best moment: Not sure it necessarily was "best," but it certainly was noteworthy. Moments before kickoff, Ohio State issued a release that said star junior cornerback Denzel Ward would skip tonight's game as he preps to enter the NFL draft. He is projected by some to the No. 1 corner prospect in the NFL draft. Turns out, the Buckeyes didn't even need him. SC QB Sam Darnold threw for 356 yards, but they were mostly empty yards as Darnold was often running for his life as the Buckeye defensive line was in relentless pursuit of a kid some feel may be the No. 1 selection in the 2018 draft if he leaves school.

Best stat: 57, rushing yards allowed by Ohio State, which limited the Trojans to 277 total yards. It was a complete evisceration of the heralded USC offense.

OFFENSE: B+. It was typical Ohio State, as the staff fed the Trojans a steady diet of J.T. Barrett left, J.T. Barrett right, J.T. Barrett up the middle with a few passes mixed in. It was more than enough to subdue this USC team that got whipped on the line of scrimmage on both sides of the ball. Ohio State finished with 413 yards compared to 277 for the Trojans.

DEFENSE: A. Simply dominating. Time and again, the Buckeye defensive line was invading the USC backfield and getting oodles of pressure on ballyhooed Trojan quarterback Sam Darnold, who tossed a pick and lost two fumbles because of the heat. Nick Bosa led the charge for the Buckeyes, who limited USC to 277 yards. Fittingly, the OSU defense got in on the scoring, as Damon Webb ran back an interception 23 yards for a TD in the second quarter to give the Buckeyes a 17-0 edge. The lone Trojan TD came after a muffed Ohio State punt in the second quarter set them up at the Buckeye 15-yard line. Other than that, SC barely sniffed the goal line.

Recap of the Ohio State D-Line effect on the Cotton Bowl: pic.twitter.com/U4dPIMSkD9

SPECIAL TEAMS: C. Nothing noteworthy in this department. Drue Chrisman did a good job punting. Sean Nuernberger hit his lone field goal from 26 yards. Tonight was all about J.T. Barrett and the Buckeye defense.