Iowa holds off Colorado at the Pentagon, 80-73 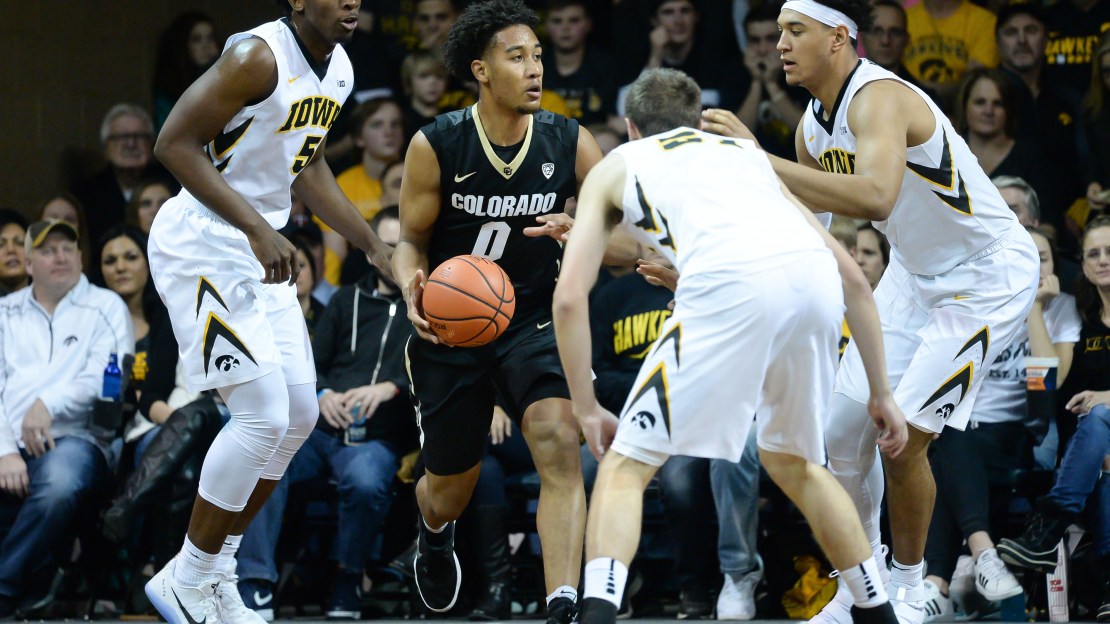 SIOUX FALLS, S.D. (AP) Isaiah Moss and Maishe Dailey each scored 16 points, as Iowa pulled away for an 80-73 win over Colorado at the Sanford Pentagon Friday.

The Hawkeyes trailed 51-48 with under 12 minutes to play, but Cordell Pemsl converted a key bucket and Dailey knocked down a go-ahead 3-pointer – one of only three converted in the game for Iowa – to put the Hawkeyes in front for good 53-51 with 10:35 left.

The win marks four straight for Iowa (8-6) after starting the season with six losses in the first 10 games.

Jordan Bohannon added 13 points, while Nicholas Baer and Tyler Cook each had 12 points with Pemsl adding 10 points. Iowa controlled the glass for the entire game, finishing with a 43-31 edge. The Hawkeyes also took advantage of a big edge at the free throw line, converting 25-of-36 attempts, while Colorado was held to 9 of 17 at the line.

Iowa built a 27-16 lead in the first 12 minutes, thanks in large part to Moss' 11 points before the break. But the Buffaloes mounted a 14-2 run slowly before halftime, capped with Namon Wright's lay-up to give Colorado its first lead at 30-29 with 1:29 ahead of the intermission. Dailey's with 25 seconds left gave Iowa a 32-31 halftime edge.

McKinley Wright scored a game-high 21 points to lead four scorers in double-figures for Colorado (8-4). Dallas Walton had a career-high 13 points and Namon Wright had 12.

Colorado: The Buffaloes received a strong performance from Wright, who has now made it 12 straight games with at least 10 points to open his career. But Colorado will wrap up its non-conference with some frustration, having lost four of its last six games.

Iowa: The Hawkeyes are now 8-0 in games in which they've scored at least 80 points and Iowa hit the magic number, despite a rough shooting night from the outside. But tough effort inside from the likes of Moss and Cook helped do the job.

Colorado: The Buffaloes will proceed to Pac-12 Conference play, playing at Oregon State on Dec. 29.