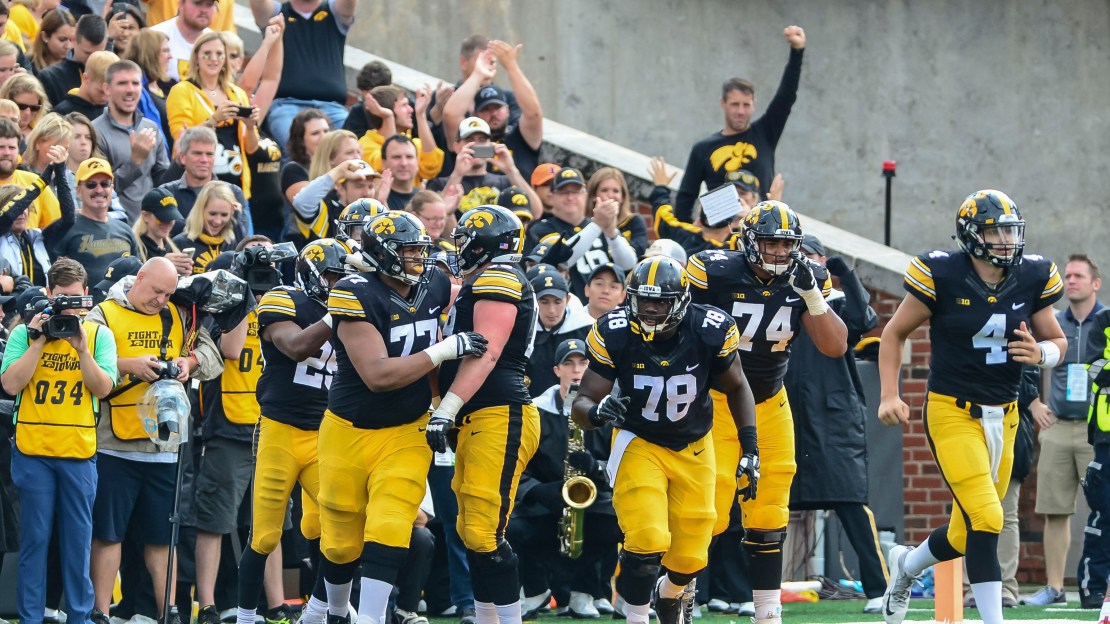 This will be Iowa's first trip to the Pinstripe Bowl and its first meeting with Boston College, as the Hawkeyes look to cap what has been a season of ups and downs. There was the high of pounding then-No. 3 Ohio State, 55-24, and the low of losing on the last play vs. then-No. 4 Penn State, 21-19.

This will be the Hawkeyes' fourth bowl in a row and 15th in 17 seasons under Kirk Ferentz, who is in his 19th season in Iowa City. The trip to play in Yankee Stadium will be a homecoming of sorts for Hawkeye back Akrum Wadley, who is from nearby Newark, N.J.

Which Iowa team will show up? The Hawkeyes scored 44 points at Iowa State, 55 points in a 31-point win over Ohio State and 56 points at Nebraska in the finale. It's the first time Iowa has scored 50 or more points in multiple Big Ten games in a season since 1990. The Hawkeyes also were also held under 20 points six times this season with Brian Ferentz in his first season as offensive coordinator.

The Hawkeyes are 8-11 all-time vs. ACC foes, but have won four straight against current members of the league. That includes a 24-14 win over No. 9 Georgia Tech at the Orange Bowl after the 2009 season. An Iowa victory would give Ferentz his 143rd victory as Hawkeye coach, tying Hayden Fry as Iowa's winningest coach in program history.

Coach Steve Addazio has led the Eagles to four bowls in his first five years, the first head coach in BC history to do so. This will be BC's second Pinstripe Bowl trip, having lost in OT, 31-30, to Penn State in 2014. The Eagles beat Maryland in the Quick Lane Bowl last season. The Eagles will arrive in the Bronx on a roll, having won five of six games. BC's only loss in that span was to NC State by three points. In fact, four of the Eagles' five losses were to teams ranked in the CFP Top 25 (Notre Dame, Clemson, Virginia State, NC State).

The BC offense is rolling. Over the last six games, the Eagles are averaging 36 points and outscoring the opposition by 19 points per contest with wins over Florida State (35-3), at Louisville (45-42) and at Virginia (41-10).

Player on the spot: The Hawkeyes need to get RB Akrum Wadley on track. He is fifth in the Big Ten in rushing with 1,021 yards. And he is just the fourth Hawkeye to rush for 1,000 yards in consecutive seasons. Wadley is the pulse of this attack that can get bogged down in the passing game.

Best individual matchup: Iowa LB Josey Jewell vs. Boston College RB AJ Dillon. Jewell was voted the Big Ten Linebacker of the Year after leading the league in tackles with 123. He must keep track of Dillon, the ACC Rookie of the Year and a first-team All-ACC pick. Dillon is the nation's second-leading rusher among freshmen and the country's No. 15 overall rusher with 1,432 yards and 13 touchdowns. He has 1,099 rushing yards over the last six games, the most of any player in the country.

Best unit matchup: The BC offensive line vs. the Hawkeye d-line should be good. The Eagles are No. 3 in the ACC in rushing, averaging 224.2 yards. Iowa has the No. 8 rush defense in the Big Ten (142.1 ypg). Nathan Bazata and Anthony Nelson are bellwethers up front for the Hawkeyes. BC OT Chris Lindstrom was a second-team All-ACC selection, while guard Sam Schmal was honorable mention.

Number: 5, bowl losses in a row for the Hawkeyes. Four of the defeats have been by at least 17 points. Iowa is the only team in the nation to lose a bowl in each of the last four seasons. The Hawkeyes' last bowl win was vs. Missouri in the 2010 Insight Bowl.