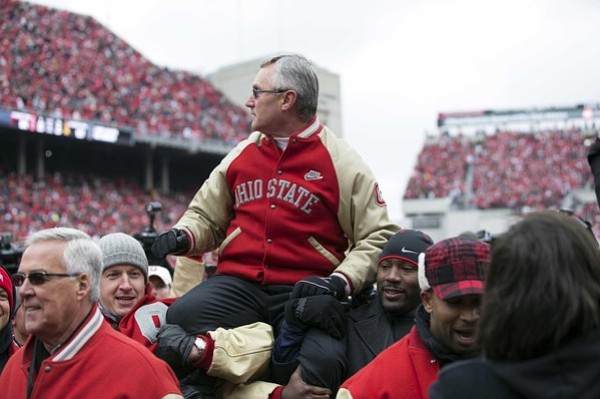 Big Ten football is in my blood. I was born in Lafayette, Ind., and raised by Purdue graduates who went on to work at the school. My high school is in the shadow of Ross-Ade Stadium, for crying out loud. And I graduated from Purdue.

I have been going to Big Ten games since Evel Knievel tried to jump the Snake River. (If you don?t know who Evel Knievel is, I feel sorry for you.) A dated reference? Yes. But that?s my point: I?ve seen a lot.

With that, it?s time for my weekly List. This week, I select my eight best coaches who arrived in the league in 1990 and beyond.

1. Jim Tressel, Ohio State (2001-2010). He checks all the boxes for greatness, arriving in 2001 from I-AA Youngstown State, where he won four national titles, to do what Earle Bruce and John Cooper couldn?t: Make the Buckeyes a national champ. Looking more like a professor than a coach, Tressel went 94-22 overall and 59-14 in the Big Ten with a national title in 2002. ?The Sweater Vest? also led Ohio State to the title game in 2006 and 2007 to go with six Big Ten crowns.

2. Barry Alvarez, Wisconsin (1990-2005). The Godfather of Madison oversaw a remarkable transformation after serving as defensive coordinator at Notre Dame for Lou Holtz. Alvarez went 119-74-4 overall and 64-61-3 in the Big Ten with three Big Ten crowns. His influence remains strong as athletic director, which is why the program remains among the nation?s best.

3. Kirk Ferentz, Iowa (1999-present). Often underappreciated and always underrated, Ferentz has a formula he knows works ? and he sticks with it. The result has been one of the longest and most successful tenures in Big Ten annals, as Ferentz is in his 19th season roaming the Kinnick sideline. He is 138-94 overall and 83-66 in the Big Ten with two league titles and one division crown.

4. Lloyd Carr, Michigan (1995-2007). The ultimate ?company man,? Carr provided sterling stewardship during a glorious run that saw him do what ballyhooed Bo Schembechler couldn?t: win a national championship, which Carr and the Wolverines did in 1997. He finished 122-40 overall and 81-23 in the Big Ten with five Big Ten titles. Oh, and Carr is the last Michigan boss to lead the program to a league title, doing so in 2004.

5. Urban Meyer, Ohio State (2012-present). He may end up being on top of this list soon. Meyer has had blitzkrieg impact since leaving Florida. His record reads like a typo: 65-7 overall and 41-2 in the Big Ten. Meyer punched everyone in the nose during a 12-0 debut in 2012 and then flexed even more in 2014 when he won a national title. He already is an all-time great. Don't tug on his cape … or else.

6. Gary Barnett, Northwestern (1992-98). His won-loss record won?t wow you (35-45-1 overall; 23-33 Big Ten). But this goes WAY beyond a winning percentage. Barnett pulled off one of the most remarkable feats in the last 100 years of college football when he delivered on his promise to ?take the Purple to Pasadena? during the 1995 season. And Barnett followed that with another Big Ten title in 1996. The woebegone Wildcats were two-time champs. It?s still hard to believe if you watched this program in the 1970s and 1980s.

7. Joe Tiller, Purdue (1997-2008). He arrived off the windswept plains of Wyoming to make Boilermaker football relevant. And that was no easy feat for a program that hadn?t been to a bowl since 1984. Tiller?s ?basketball on grass? turned Purdue into a Rose Bowl team in the 2000 season. Along the way, he also changed the offensive culture in the Big Ten by showing you could build an offense around the pass ? and win. Purdue's all-time winningest coach passed away last Saturday. Rest in peace, Coach Tiller. You changed a school and conference. And had a lot of fun along the way.

8. Mark Dantonio, Michigan State (2007-present). Dantonio?s steely stare and lantern jaw have become iconic in East Lansing. Even better, he has carved out a big share of Big Ten real estate for Michigan State during his tenure, scratching out a 93-43 overall record and a 54-28 Big Ten ledger with three league championships and a College Football Playoff appearance in 2015. And Dantonio has done it all with mostly three-star players. Take a bow. Heck, take two bows. And try to smile a little. Life is good!