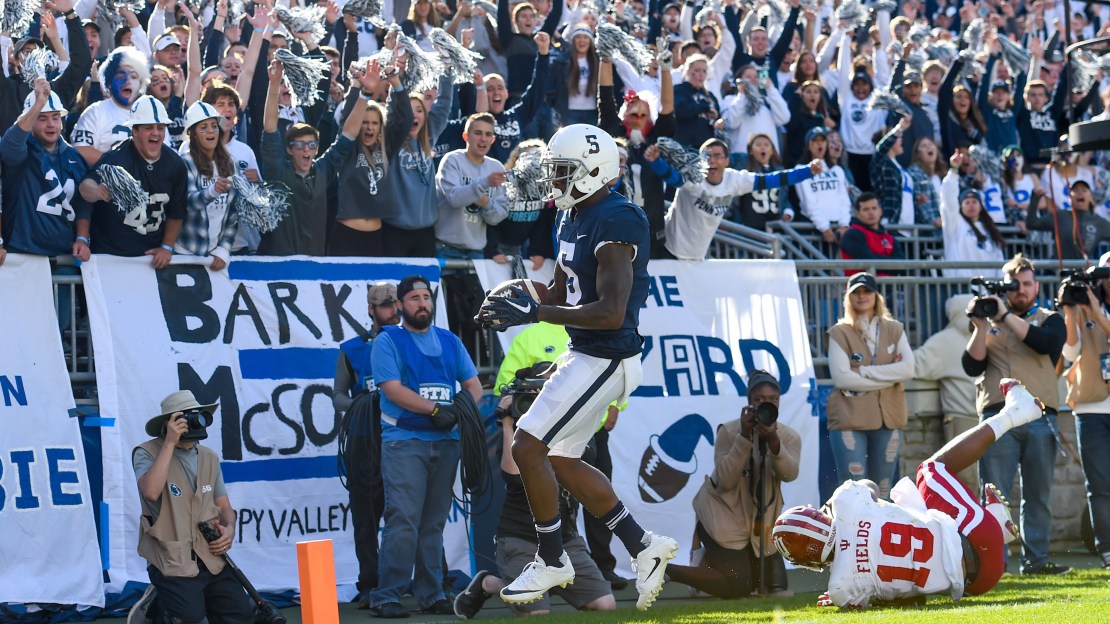 On a day when the Big Ten learned of the passing of Purdue icon Joe Tiller, the conference saw Penn State continue to dominate, Michigan State and Wisconsin make statements and Maryland show it has life even with a third-team QB.

Here is the best of Week 5.

Biggest surprise: Maryland. It has to be Terrapins, who took a 31-24 win at Minnesota, which was 3-0. The Terrapins ran roughshod over a Gopher defense that ranked among the best in the nation. And Maryland did it with a third-team QB as the team was coming off a tough home loss to UCF.

Biggest disappointment: Minnesota. The Golden Gophers had been basking in the glow of a 3-0 start, sporting a glossy resume that said they had the nation?s No. 1 rush defense (59.0 ypg) and the No. 5 overall defense (239.0 ypg). Well, it all came crashing down in a 31-24 loss at home to a Maryland team that was coming off a home loss and was starting third-team QB Max Bortenschlager, who hit 18-of-28 passes for 154 with two TDs and also ran for a TD. And Minnesota had two weeks to prep.

Play this again: Maryland at Minnesota. The DJ (Durkin) vs. P.J. (Fleck) clash was primo. Maryland led, 17-10, at the half and 24-17 in the fourth quarter. But the Gophers scored the tying TD with 3:54 to go only to see Maryland march and tally the winning score with 1:10 left in the game.

Top play: Saquon Barkley one-handed catch and run vs. Indiana. The early Heisman frontrunner had three plays worthy of this honor (the kick return and TD pass, the others), but let's go with this ridiculous highlight. The one-handed catch was silly, as were the move he put on likely All-Big Ten linebacker Tegray Scales and the speed he displayed making it into a big play.

Top moment: Michigan State fans extended Iowa's new "First Quarter Wave" to Spartan Stadium. In a touching moment, the fans all waved, as they do at Kinnick Stadium between the first and second quarters, to the young patients at the UI Children's Hospital watching on TV.

.@MSU_Football did the Iowa wave yesterday while hosting the Hawkeyes and my god is it dusty in here pic.twitter.com/keGsvm0iE1

Top catch: Laress Nelson vs. Iowa. One could make a case for Barkley's play mentioned above, but Nelson's one-hander was something sweet. What made the catch so great was that the Brian Lewerke pass was behind Nelson, and yet the wideout adjusted to haul in just his second reception of the year.

Top tackle: D'Cota Dixon safety vs. Northwestern. Dixon had a huge day (more on that below), and one of his biggest plays was this game-sealing safety on Clayton Thorson. Seriously, look how far he ran to make the play!

Top photo: Ohio State DC Greg Schiano returned to Rutgers for the first time Saturday night, and he had a great pregame moment with his former player Eric LeGrand.

Great photo from @AndyMills_NJ. He was/is more than a coach to Eric. pic.twitter.com/t7muycN1E4

Top tweet: You mean other than Troy's epic troll after winning at LSU? OK, from a Big Ten perspective, it has to be Scott Van Pelt's troll following his alma mater's win over P.J. Fleck and Minnesota.

Did you see this? Nate Stanley turnover at Michigan State. For a second, it looked like the Iowa quarterback was going to be swallowed up. The next, it looked like he might find a way into the end zone. Alas, Stanley lost the ball as he was attempting to find a receiver, and Michigan State pounced on the loose ball. Yes, Jim Harbaugh's idle-week dive at a Michigan swimming event also needs some attention.

Defensive Player of the Week: Wisconsin S D?Cota Dixon. He had 12 tackles and 1.5 sacks, notching a safety to seal the game and helping hold Northwestern to 244 yards.

Special Teams Player of the Week: Penn State?s Saquon Barkley. He opened a 45-14 win vs. Indiana with a 98-yard kickoff return for a TD. Barkley also threw a TD pass on this day, polishing his Heisman resume even more.

Wisconsin. The Badgers sent a message that they are the team to beat in the West with a 33-24 win vs. visiting Northwestern. It was a big day for the defense, which made eight sacks and held NU to 244 yards as the Badgers won despite three turnovers and trailing 10-7 at the half. The UW defense iced the game with a safety.

Maryland. Just a week ago, things looked dicey after the Terps lost a second QB for the season to injury on the way to home defeat to UCF. Had Maryland lost all of its early mojo from that season-opening win at Texas? The Terps looked impressive behind third-team QB Max Bortenschlager in a 31-24 win at Minnesota.

Michigan State. The Spartans had a grind-it-out 17-10 win vs. Iowa coming off a tough home loss to Notre Dame. Michigan State limited the Hawkeyes to 231 yards and one TD. Look like the Spartans have regained their stride.

Northwestern. The Wildcats had a chance to show they were a dark horse in the Big Ten West. Alas, they fell behind Wisconsin, 31-10, before rallying in a 33-24 defeat. NU?s offense has issues up front, as the Wildcats had just 244 total yards with only 25 on the ground.

Minnesota. Maryland stuck a pin in the Gophers? 3-0 start. A touted Minnesota defense was ravaged for 416 yards with 265 coming on the ground despite having two weeks to prep for a Terp squad that was starting a third-team QB. How good is Minnesota? I have no earthly idea.

Illinois. The Illini had two weeks to prep for a visit from Nebraska. And they looked bad in a 28-6 Friday night home loss. The offense is toothless (199 yards). The defense is soft (411 yards). This figures to be the first of many long game days for an Illinois team that is committed to a youth movement.

244, yards Wisconsin allowed to Northwestern, which had just 25 yards rushing on 34 carries. The great Justin Jackson? He ran nine times for 25 yards with a long run of eight yards.

1, touchdowns on a kickoff return by Penn State?s Saquon Barkley. He ran back the opening kickoff 98 yards vs. Indiana.

6, the number of players to return a kickoff for a score and throw a touchdown pass after Saquon Barkley's did it vs. Indiana.

73-0, Penn State scoring advantage in the first quarter this season.

265, rushing yards for Maryland vs. Minnesota, which had yielded 177 total in three games entering today.

3, sacks for Wisconsin LB Garrett Dooley, as the Badgers notched eight on the day.

130, rushing yards for Maryland?s Ty Johnson on 18 carries with a TD, which won the game.

106, yards rushing for Nebraska?s Devine Ozigbo on 18 carries with a TD.

115, yards receiving for Ohio State?s Johnnie Dixon on just three grabs with two TDs. That comes to 38.3 yards per catch.