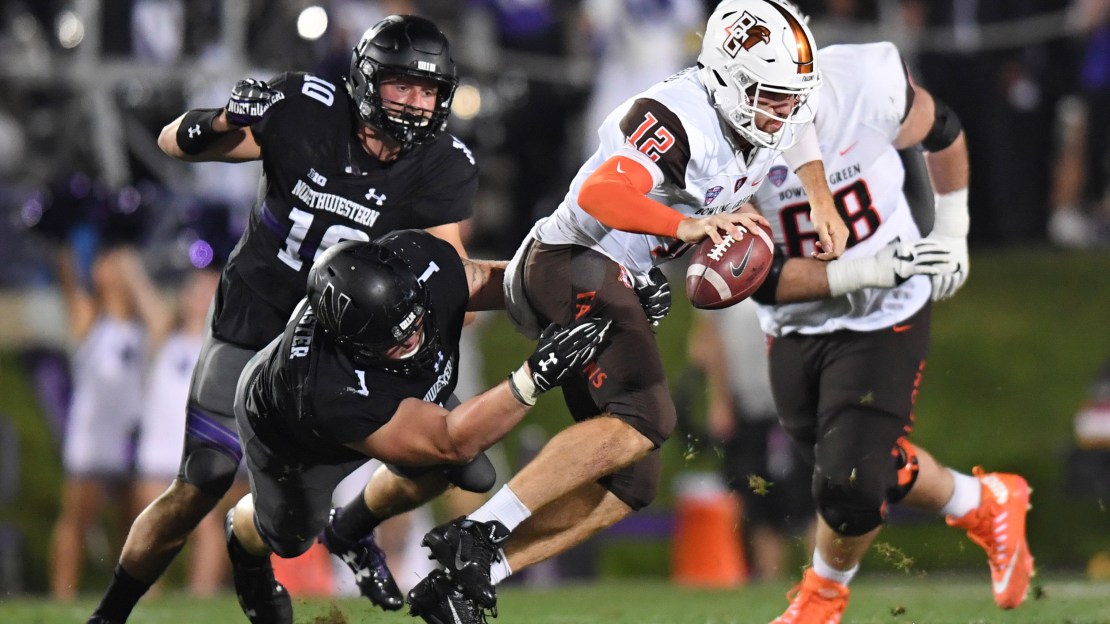 The No. 1 jersey on Tyler Lancaster just looks odd.

A number more befitting the 6-3, 300-pound senior Northwestern defensive tackle would be, say, 77. But the No. 1 jersey is special in Evanston. And, no doubt about it, Lancaster is a special player and a special person. More on the No. 1 jersey later.

The Romeoville, Illinois, native and Plainfield East grad will lead the Wildcats in a big game this Saturday at Wisconsin in the Big Ten opener for each squad. It's a clash between two of the best teams in the Big Ten West. And each has their eyes on winning the division championship. This game will go a long way in shaping the race. The Badgers won last season at Northwestern, 21-7.

But NU won the two games before that, including a 13-7 victory the last time the Wildcats visited Madison in 2015. And Lancaster had a big game, notching a sack and a forced fumble two years ago vs. the Badgers.

Lancaster was pretty good last year, finishing 2016 with 28 tackles and 3.5 TFLs. This season, he has 13 stops and 3 TFLs. I caught up with Lancaster as he and the 2-1 Wildcats prepped to take on 3-0 Wisconsin with each team coming off a bye week.

Q: How do you think the defensive line has played so far?
A: There obviously is room for improvement. Getting to the quarterback is one area people have seen (that needs to get better). We need to step up there, but week by week, we are improving. Today, we had our best Tuesday practice yet. I think a lot of good things will come out of this group.

Q: What does it mean to wear the No. 1 jersey?
A: It was incredible to receive that. The leadership council elects the guy that they think represents the program best. And they thought that person was me. And it was very humbling to receive that. It was amazing. It gave me another responsibility to uphold what it means to be a Wildcat on and off the field. I was having lunch with my friends when I got the news this summer just before camp. Coach Fitz called me and we all celebrated. I knew we had voted as a team to see who would wear No. 1 and we were waiting for the results. I was almost in tears. It was really exciting.

Q: Favorite place to eat on campus?
A: Chipotle is probably the go-to place for me.

Q: What about Mustard's Last Stand?
A: It is great, but you don't want to eat too much of that. As a 300-pound-plus lineman, you want to stay away from that.

Q: What's your latest TV indulgence?
A: I have been into this show called "Vice Principals" on HBO. That was my thing this past week. Every time I had a bit of down time, I'd watch it. There is only one season out. It is pretty hysterical.

Q: The new on-campus practice facility is beautiful, hugging Lake Michigan. Have any footballs ever landed in the lake?
A: No, strangely enough, I haven't seen it happen. I wasn't hoping for that to happen. But I was hoping to see that at least once. But we have some accurate quarterbacks, fortunately. And the kickers aren't too wild. But I would like to see that.

Q: What's the best part of new football facility being built adjacent to the lake front practice fields?
A: That new facility not only will have the best view, but it will have amazing pieces inside of it. That weight room is an extreme 200-percent upgrade on what we have now. The indoor practice facility will be unique and amazing. In my opinion, it will be the greatest facility in the country. I am excited for it.

Q: No offense, but are you the slowest guy on the team?
A: No.

Q: Who is?
A: I don't know if I can throw anyone under the bus like that. I couldn't tell you.

Q: Who is the fastest defensive lineman?
A: The guy who is the fastest-twitch is Jordan Thompson. He is fastest off the ball. He is really quick. But the fastest in a 40-yard dash may be Mark Gooden, even though he is a bit bumped up now.

Q: Has any opposing offensive lineman ever given you fits?
A: Funny, I was asked that recently and I drew a blank. There are none that stick in my head.

Q: Is there a NU offensive lineman who is a tough matchup for you in practice?
A: Brad North. His hands are really good. When he get his hands in you, it's hard to get them off because of his grip strength. Once he has a hold of you, he has you.

Q: Cubs or Sox?
A: I have to say Sox because I don't want to come off as a bandwagon fan. But I respect the Cubs.

Q: Who is the one teammate you wouldn't want to fight?
A: Normally, I think a lot of people would answer me. Not in terms of size but speed, I think Godwin (Igwebuike) would be a tough matchup because he could get into you quickly. Look out for him.

Q: Any hidden talent?
A: Rock Band, without hesitation.

Q: Favorite band?
A: I like Blink-182 and a Day to Remember. They are my favorite groups. I don't really have a favorite song.

Q: You pumped to go play in Camp Randall Stadium?
A: The Badgers are looking good. I always like to play Wisconsin. We had a great game up there last time. We will work our best to make it happen again. They threw snowballs at us after the game. It was fun.