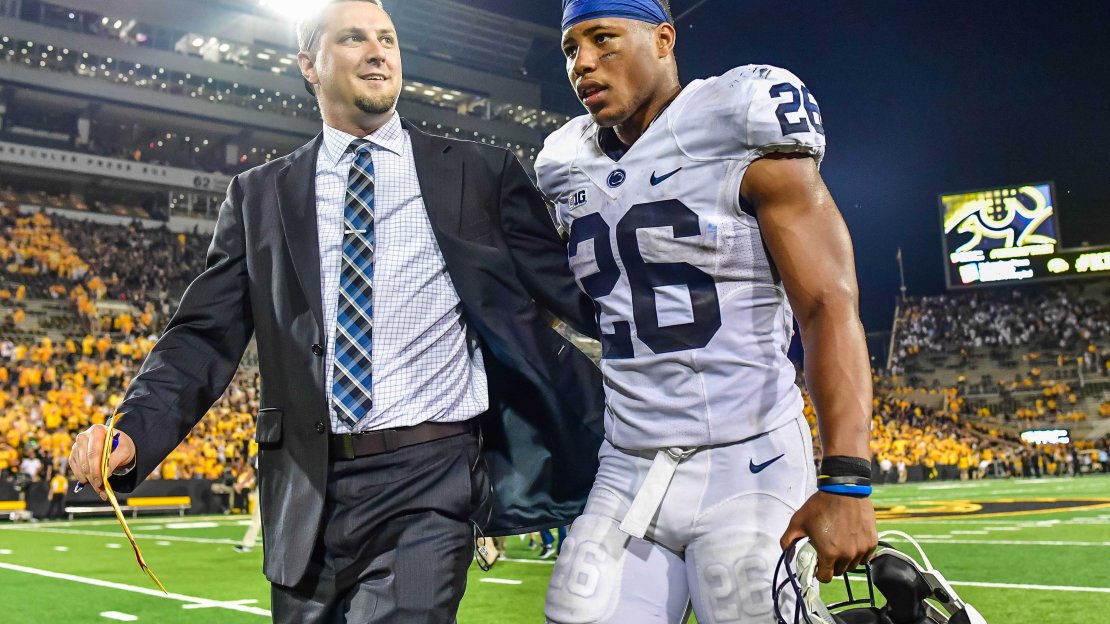 A wild Week 4 saw Penn State pull out a magical win at Iowa that makes you think this could be another special year for the Nittany Lions. And Michigan is looking better and better, while Ohio State continues to fine-tune for bigger games to come and Nebraska notched a much-needed win after a tough week.

Here is the best of Week 4.

Biggest surprise: There really was no big shocker. But it was surprising to see John O?Korn play so well in relief of injured Wilton Speight, who left the game at Purdue in the first quarter. O?Korn came on to hit 18-of-26 passes for 270 yards with a TD in a 28-10 win. Are the Wolverines the best team in the Big Ten East?

Biggest disappointment: Maryland. The previously white-hot Terps hit a big bump in the road in a 38-10 loss at home to Central Florida. Maryland?s hopes sunk when second-team QB Kasim Hill left the game early with an injury. The Terps had just 197 yards of offense, running 37 times for 42 yards with third-teamer Max Bortenschlager taking over at QB. First-string QB Tyrrell Pigrome was hurt in the opener.

Play this again: The Penn State at Iowa game was an instant classic. The Nittany Lions looked doomed after the Hawkeyes scored the go-ahead TD with 1:42 left. But Trace McSorley led PSU on a 12-play, 65-yard march that culminated with a seven-yard TD pass to Juwan Johnson as time expired.

Never play this again: Indiana?s 52-17 win vs. Georgia Southern was a yawner. The Hoosiers led 31-7 at halftime. Zzzzzzzz. IU was supposed to dominate ? and it did. Should the Hoosiers be worried about allowing 242 yards rushing? Ah, forget it. Just enjoy!

Best moment: Iowa's new "First Quarter Wave" keeps getting better every week. Under the lights for the first time this year at Kinnick Stadium, the fans used their smart phones while waving to the young patients watching next door at UI Children's Hospital. It was a beautiful sight.

Best play: Saquon Barkley hurdling 3rd-down conversion at Iowa. In what was an heroic effort, Barkley made a spectacular run on a 3rd-and-6 screen pass (one of many on the night – don't forget about this wild run), leaping an Iowa player and then absorbing a hit as he landed. It was a superhuman play by a superhuman. Speaking of Penn State and best plays, I'd be remiss if I don't mention the Trace McSorley-to-Juwan Johnson walkoff touchdown pass.

Best catch: Jerome Washington at Nebraska. This was a stunner, something you may not see the rest of the year, or maybe for years. Washington secured the ball between his legs and then reaching behind his knees with both hands to secure the ball as he hit the turf. How did he do that?

Best tweet: This is a collection of tweets, of course, but you have world class athletes Lolo Jones, Mike Trout and former Ohio State star Ezekiel Elliott marveling over Saquon Barkley.

Did you see this? Jeff Brohm is making a difference at Purdue, there's no doubt about it. Prior to the Boilermakers' game vs. No. 8 Michigan, the first-year Purdue coach fired up his players by spiking a chair at the end of his pregame speech.

Safe to say that they love the new @BoilerFootball coach even more after this. pic.twitter.com/OPJAZOlRFk

Offensive Player of the Week: Saquon Barkley, RB, Penn State. He had an out-of-the-world effort in Iowa City, running 28 times for 211 yards and a TD and leading the club with 12 catches for 94 yards. Time and again, Barkley made big plays, running over defenders, tip-toeing the sideline and leaving it all on the field on a night when he set the school single-game record for all-purpose yards. No doubt, he is the Heisman front-runner.

Special Teams Player of the Week: J-Shun Harris, Indiana. The diminutive Harris ran back a punt 70 yards for a TD in a 52-17 win vs. Georgia Southern.

Michigan. The Wolverines did what the Wolverines do: Stuff offenses. Michigan suffocated the Boilermaker offense, which had just 189 yards. And it may have found a QB in John O?Korn, who looked good in relief of an injured Wilton Speight. O?Korn hit 18-of-26 passes for 270 yards with a TD and pick.

Penn State. The aforementioned win at Iowa showed this team has the moxie to stare down adversity and still win. No doubt, the Nittany Lions? confidence will grow. This team is going to be difficult to beat.

Maryland. The Terps were one of the hottest teams in the Big Ten. But the mojo came to a screeching halt in a 38-10 home loss to Central Florida. Even worse: QB Kasim Hill got hurt. He already was the second-teamer.

Purdue. Time to pump the brakes in West Lafayette. Yes, Michigan is very good, especially on defense. But it was sobering to see how inept the Boilers were on offense. Still, the future looks bright for the Boilers, and better days are ahead.

Michigan State. The Spartans began the day 2-0, but we didn?t really know how good they were after beating Bowling Green and Western Michigan. Well, a 38-13 home loss to Notre Dame tells us MSU still has work to do coming off a 3-9 season.

7, Ohio State receivers who caught TD passes vs. UNLV. That is a school single-game record and a Big Ten record.

101, yards rushing for Nebraska?s Devine Ozigbo on 24 carries vs. Rutgers.

5, touchdown passes for Ohio State QB J.T. Barrett, who only played in the first half and helped the Buckeyes notch 664 yards vs. UNLV.

340, yards passing for Michigan State?s Brian Lewerke, who hit 31-of-51 passes with two TDs and a pick.

2, interceptions for Nebraska?s Tanner Lee, who now has nine on the year.