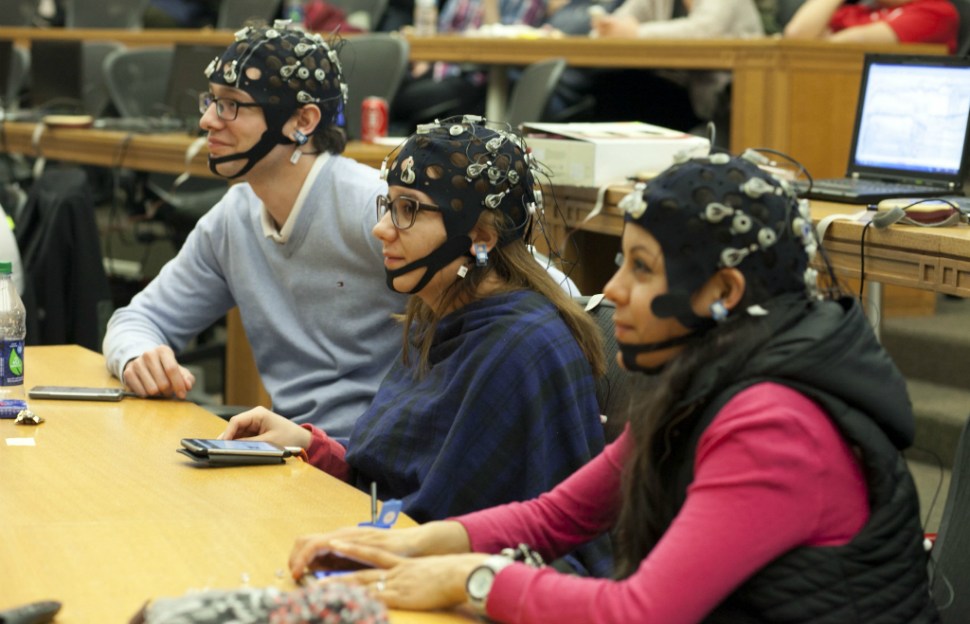 If in the near future you find yourself buying a movie ticket for every trailer you see, it means that marketers have been paying attention to Sam Barnett and Moran Cerf?s work.

The Northwestern neuroscience professors analyzed the brain waves of groups of people to see how engaged they were with certain movie trailers. They found that trailers which caused the highest incidence of neural similarity – getting a bunch of people?s brains to respond in the same way – were more likely to generate ticket sales. Trailers that were simple, familiar and easy to understand produced the highest neural similarity.

So if that's true why was Baywatch such a failure at the box office?

BTN LiveBIG spoke with Barnett and Cerf by phone about the results of their study, whether being engaged with a trailer means you?ll like the movie and what filmmakers can learn from their results.

BTN LiveBIG: Based on the results of your study, what makes for a good movie trailer?

Sam Barnett: For a good movie trailer, simplicity drives engagement. And if it can make lots of people feel and think and do the same sorts of things, [like] laugh at the same time, then it?s driving what we measure as neural similarity. Neural similarity has been linked to all sorts of measures of engagement like future recall [which is] people?s ability to remember a future movie trailer. Ultimately, six months later when the movies are out in theaters, we?re able to turn that into box office predictions and we?ve been very successful at predicting future ticket sales.

BTN LiveBIG: Is this the conscious or unconscious part of the brain that you're measuring?

Barnett: People are biased by what movies they think they?re supposed to want to watch or by the perceived popularity of movies. When we access the brain?s measures directly using our [electroencephalograph] system and then converting it into this neural similarity score, which we call cross-brain correlation or CBC, we are then bypassing the conscious biases and getting right to whether or not a movie trailer is making people think and act in the same way or whether it?s making people drift apart [and think differently].

One of the things you cite as increasing engagement is familiarity. A lot of movies like Baywatch, and The Emoji Movie have high familiarity but did poorly at the box office. I know they weren't in your study but do you think this was bad marketing or is there a limit to how much familiarity the brain wants?

Barnett: This reminds me of a few different trailers in our study, including Noah. Noah was a very familiar story to people. It was a very elegant advertisement in that it had clear and simple visuals, it didn?t have extensive, complex dialogue. As a result, it produced higher brain engagement than some other movie trailers that had to explain a lot more. However, even though you buy something based on familiarity, there?s still the next level of engagement: you need to have a story that people can actually latch onto and that convinces many different people to feel the same way. Beyond familiarity, you need to have other qualities to actually make people universally excited to see a movie.

BTN LiveBIG: And just because someone is more engaged with a trailer doesn?t necessarily mean people will actually like the movie once they?ve seen it.

Cerf: The difficult part of the process to understand is that high engagement doesn?t mean liking or wanting. It?s a separate thing. You could be very engaged in a bad experience, something we cannot look away from. I think we all know the example of a car crash where people drive by and cannot look away. So this would be a very engaging experience, but it isn?t necessarily a positive one. But it could work on everyone?s brain in the same way.

BTN LiveBIG: If you?re a movie maker, how do you apply this research to the creation of the film itself to hit those engagement marks in the brain?

Barnett: Some of those things are reducing complexity. It?s possible some artists believe the more they can put onto a frame, the better. If they can have two characters on the screen, it?s better than one. Our research shows ideally it?s one image that you have people all paying attention to because again we?re trying to drive neural similarity – we?re trying to get lots of people in the audience, despite their individual differences to collectively feel and think the same way about something. If you can say something in five words, that?s better than saying something in 16 words.