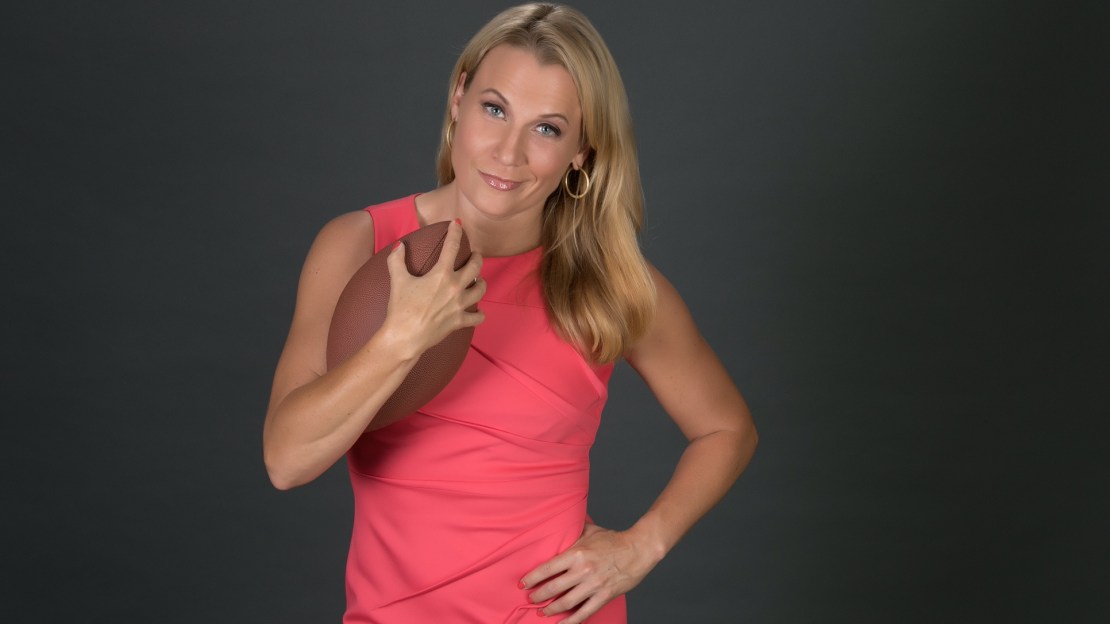 Lisa Byington has been with BTN since the network began in 2007, and Saturday she'll make history on the air.

The longtime sideline reporter, studio host and play-by-play broadcaster will become the first woman to be the play-by-play voice for a football game on BTN when she calls the Bowling Green at Northwestern game on Saturday at 7:30 p.m. ET. When Byington leads the booth at her alma mater's Ryan Field, she'll join a small club of women who have called play-by-play for either college football or the NFL on TV.

BTN.com caught up with Byington ahead of her historic assignment for a B1G Q&A.

BTN.com: Did you know this assignment was likely before getting the official word from BTN president Mark Silverman, or was it a surprise?

Lisa Byington: It has always been a goal of mine to eventually do football from the booth. I wasn't expecting this for this year, but I was happy to accept it! This is not the first time BTN has given me a great opportunity. I had never been a sideline reporter before BTN offered me a chance that first weekend of the network back in 2007. Ironically, it was for a Northwestern football game. So the first words I spoke on BTN were at that Northeastern – Northwestern football game. I hadn't been a studio host or play-by-play before, and BTN again gave me those opportunities. I'm happy that my bosses felt like this was the next broadcasting move that made sense.

BTN.com: What was your immediate reaction when you got the official word that you?d be on the play-by-play call?

LB: I was excited and pleasantly surprised! I was actually running errands in downtown Chicago on Michigan Avenue when I got the call. As we all know, the city is loud, and I wasn't even sure if I had heard it correctly at first. My walk home that day was extra special.

BTN.com: When working your first broadcasting job in Alpena, Mich., (pop. 10,000) did you ever anticipate an opportunity of this magnitude would come along someday?

LB: When I first started working in Alpena, I was just trying not to screw up anchoring my first broadcast. Alpena was the second-smallest market in the country, and I was just happy to have been given an opportunity to be on-the-air.

I never planned to be the first in anything in this industry. I have been used to being the beneficiary of those who have come before me. I played two sports at Northwestern because of the women who fought for Title IX. I have always been on the other side of opportunity, and I am SO grateful for the ones who came before me to pave that path in athletics, in social stances, and in broadcasting. The Gayle Sierens, Pam Wards, Beth Mowins, Kate Scotts of the world are part of that progress. If I can do a small part in helping with that, and to push forward that momentum, I am honored.

BTN.com: Does your preparation change in the lead-up to this game compared to other games in other sports you?ve called?

LB: In football, there's way more information to digest, and consequently, the workload is higher. The dynamic of calling a football game is much different than any other sport. There are other aspects a play-by-play has to make decisions on that aren't applicable to other sports. For instance, you're a mile-high from the action, so how do you use your binoculars or your TV monitors? How much will you call the action with your naked eye? In football, you have a spotter to help you identify players on your broadcasting charts …. "Joe Smith made the tackle, Donovan Brown got the tip" … what will I need from that spotter? What stats will I want from my statistician?

So the first 5-10 minutes for me in the booth will be key in getting a sense for all those different elements to calling a game, and finding my rhythm.

BTN.com: Does the fact that you?re able to call a game at Northwestern-your alma mater-make it any more special than it already is?

LB: Of course coming full-circle is special. I took journalism classes just about a mile down the road from Ryan Field. I began my broadcasting career at Northwestern. I went to school with Pat Fitzgerald, and sat in the stands as a student during the Rose Bowl year. So I will definitely take a few moments before the game, and maybe walk around the field, and appreciate this opportunity and especially the place that prepared me for this opportunity.

But when I put the headset on, I take off the alma mater hat, and I take the fan hat off, and I root for good storylines and good people, and most importantly good games.

BTN.com: Ten years from now, do you think we?ll see a far higher number of women in the football broadcast booth than we see today? Because right now, it?s pretty much you and the women you mentioned who came before you.

LB: Goodness, I hope in five years this kind of thing ISN'T making a headline. It's my hope that someday we can count on two hands the number of women calling a football game, and then eventually we can stop counting.

There was a 30-year gap between Gayle Sierens doing an NFL game and Beth Mowins, which is absurd in my mind. I hope we can get to the point very soon where hearing a female voice on a football game sounds normal. I hope we can look at an announcer as a "play-by-play" and not a "female or male play-by-play." I was very proud to watch Beth on Monday Night Football. I thought she did great… and she did great as a "football play-by-play"….period.

BTN.com: Do you look at yourself as a role model to women and girls who have dreams of holding such a male-dominated position?

LB: I take being a female role model very seriously. I didn't have a lot of female sports role models growing up because I couldn't watch a lot of women's sports on TV. But I am a firm believer that it's easier to have dreams by watching people who look like you. So if there is a little girl watching Saturday, and she thinks she can call a football game in the booth, than that's progress in my mind. And maybe it's not just being a role model to that little girl that's crucial, but it's also being a role model for that little BOY watching as well. This opportunity is equally as important in that way.