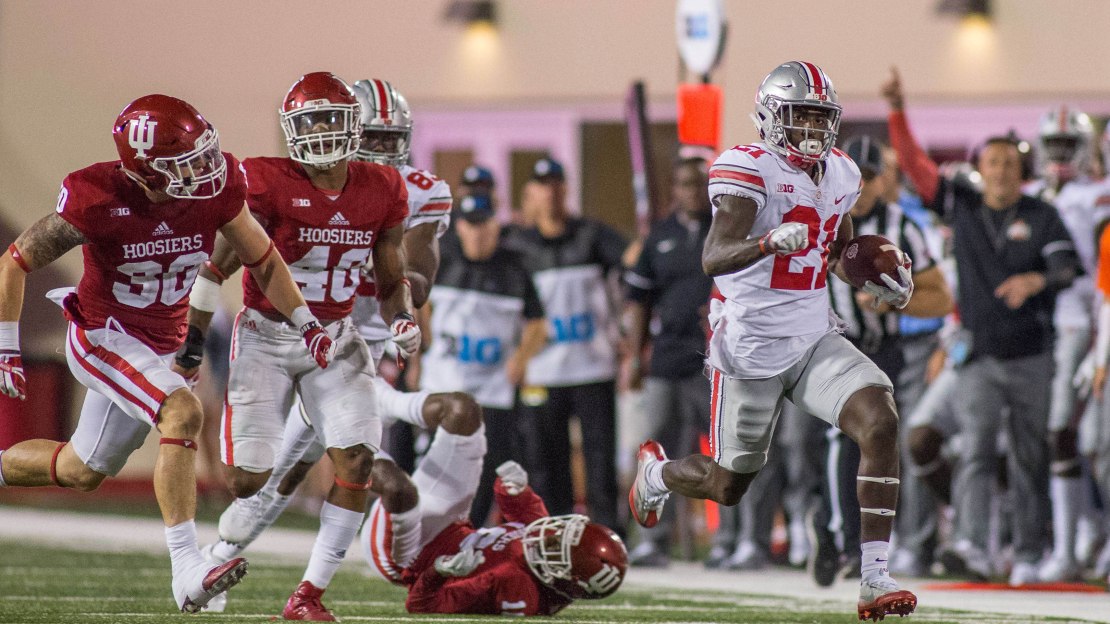 One week is in the books. And it was a successful one for the Big Ten, which was handed just two non-conference defeats (Rutgers vs. No. 8 Washington & Purdue vs. No. 16 Louisville) and had two big wins by Michigan and Maryland.

Biggest surprise: Maryland. The Terrapins poured a cold bucket of water on the debut of Texas coach Tom Herman, taking a 51-41 win in Austin vs. the No. 23 Longhorns. And, honestly, Maryland was in control for almost the entire game. If not for three non-offensive TDs by the Longhorns, the Terps would have won with more ease. The win snapped a 17-game losing streak to ranked opponents, the third-longest streak among Power Five conference teams.

Biggest disappointment: Nebraska. Yes, the Cornhuskers won, 43-36. But they had to hang on for dear life to take down Arkansas State of the Sun Belt after leading 41-26 in the fourth quarter. Not an ideal start for Mike Riley in Year 3. The new 3-4 defense of Bob Diaco had a lot of holes punched in it, as Arky State had 497 yards and was throwing into the end zone in the final seconds. Better get things buttoned up quickly with a trip to Oregon next.

Play this again: Purdue vs. Louisville. This was good theater. The Boilermakers led the 16th-ranked Cardinals at halftime. Then, it had the ball with a chance to tie the game and force OT in the final minutes before tossing an interception in a 35-28 defeat. It was a valiant effort for Jeff Brohm in his Purdue debut vs. his alma mater.

Never play this again: Akron at Penn State. The reigning Big Ten champ's 52-0 win was a real-life version of the Coyote vs. the Roadrunner. All Roadrunner, no Coyote.

Best play: Parris Campbell 74-yard TD at Indiana. As is the case with any non-conference week, there were plenty of candidates. This one, though, not only gave Ohio State a lead it wouldn't relinquish in the season's first Big Ten game, but it showcased the wideout's impressive speed. Campbell ran by no fewer than five Hoosiers en route to paydirt.

Best hit: Darnell Davis sack vs. Washington. Believe it or not, Jake Browning was OK following this crushing hit.

Best moment: There's a new Big Ten tradition, and it's going to happen before the second quarter at Kinnick Stadium. With the new UI Children's Hospital opening across the street, constructed with a great view of the field, fans, all at once, will take a moment to wave to the patients and families watching in the hospital. Watch the moment here.

Did you see this?: Wisconsin TE Troy Fumagalli wore No. 48 in honor of Badger LB Jack Cichy, who suffered a season-ending knee injury over the summer. Fumagalli had five catches for 105 yards with a TD.

Did you see this, Part II? Michigan State?s Tyson Smith suffered a stroke shortly after the 2016 season had ended. In Saturday?s rout vs. Bowling Green, the Spartan cornerback ran back an interception 38 yards for a TD.

B1G welcome back: It was good to see Illinois WR Mikey Dudek, who missed the last two seasons with injures, and Janarion Grant, who suffered a season-ending injury early last season, back on the field. Dudek made a big impact in a 24-21 win vs. Ball State, catching two passes with one going 31 yards for a TD and running back a punt 52 yards, and Grant scored Rutgers' first touchdown vs. Washington.

Co-Offensive Player of the Week: Ohio State QB J.T. Barrett. The three-time captain threw for 304 yards and three scores, with no interceptions, and added 61 yards and a score on the ground in the Buckeyes' comeback win at Indiana. Penn State RB Saquon Barkley. The electric junior amassed 226 yards on 17 touches, an average of 13.3 yards, and scored two touchdowns in Penn State's dismantling of Akron.

Co-Defensive Player of the Week: Minnesota S Antoine Winfield Jr. He had seven tackles, a sack, blocked field goal and two PBUs in a 17-7 vs. Buffalo, which had to punt eight times and ran for just 51 yards. Iowa LB Josey Jewell. The Outlaw registered 14 tackles (seven solo) with two sacks and 2.5 TFLs.

Co-Special Teams Player of the Week: Penn State?s DeAndre Thompkins. He had four punt returns for 127 yards, taking one back 61 yards for a TD. It was the first Nittany Lion punt return for a TD since 2005. Michigan K Quinn Nordin. The former Penn State commit hit four field goals, including a pair of 50-yarders (55 & 50), becoming the first Wolverine to do so in a game, in Michigan's win vs. Florida.

Wisconsin. The Badgers fell behind Utah State, 10-0 ? and then ripped off 59 consecutive points in a 59-10 victory on Friday night in Madison. This is a preview of things to come for the West division favorite.

Penn State. The Nittany Lions roared out of the gate with a 52-0 domination of Akron. The defending Big Ten champs looked to be in midseason form, as no Big Ten team was more dominant in the opening week of action.

Michigan. The Wolverines made a huge statement by crushing Florida, 33-17, in Arlington, Texas. Yes, the Gators were without 10 suspended players, including their top wideout and running back. Still, Michigan didn?t yield an offensive TD and outgained Florida, 433-192.

Indiana. No shame in losing to Ohio State. But the way the Hoosiers stumbled down the stretch in a 49-21 loss to the Buckeyes was disconcerting. IU led 21-20 in the third quarter and then got ripped for 29 unanswered points.

Illinois. Yes, the Illini won, but they had to hang on for dear life and rally to overtake visiting MAC foe Ball State. Illinois was outgained, 375-216. Upcoming games vs. Western Kentucky and at USF look scary.

174, yards passing Iowa allowed touted Wyoming QB Josh Allen, who hit 23-of-40 passes with no TDs and two picks as the Hawkeyes won, 24-3. Not bad for a rebuilt Iowa secondary.

181, yards rushing for Ohio State?s J.K. Dobbins. With Mike Weber out with a hamstring injury, Dobbins became the first true freshman to start at running back since Maurice Clarett in 2002. And Dobbins ran for a school true freshman record 181 yards in a win at Indiana.

99, yards covered on Joe Ferguson's interception return for a TD, the longest in Wisconsin history.

192, yards rushing for Nebraska?s Tre Bryant on 31 carries with a TD.

226, total yards for Penn State RB Saquon Barkley. What an opening statement in what could be a Heisman season for the junior, as Barkley also had two TDs in a 52-0 win vs. Akron. Poor Akron. Barkley ran 14 times for 172 yards and two scores and had three catches for 54 yards.

11, rushing yards for Florida on 27 carries vs. Michigan.

17, consecutive games lost by Maryland vs. ranked teams before its win at No. 23 Texas.

133, yards receiving for Maryland?s D.J. Moore on seven grabs with a TD.