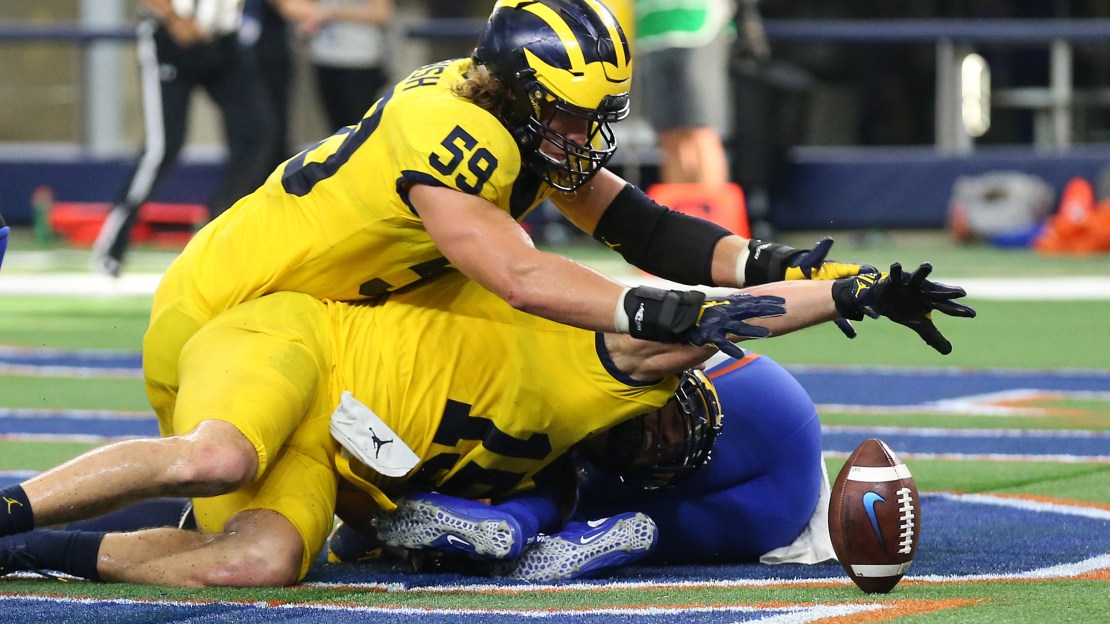 In the end, all the secretiveness about the Michigan roster and who would be the quarterback didn?t matter. The Wolverines were supposed to take care of suspended-laden Florida. And, they did–with ease. Jim Harbaugh probably could have given the Gators his playbook and it wouldn't have mattered.

The No. 11 Wolverines blasted the two-time defending SEC East champs behind a ferocious defense that allowed just 192 yards in a 33-17 game that wasn't even that close. Aside from allowing two pick-sixes early on, Michigan clamped down on No. 17 Florida and had control of this game. This was the first time a ranked Big Ten team beat a ranked SEC squad in a non-conference game. The Big Ten was 0-8-1 in such contests.

No doubt, Michigan was helped by the fact Florida was playing without 10 players who were suspended. Among those sidelined were two key players: top wideout Antonio Callaway and top running back Jordan Scarlett.

Still, let?s not diminish the dominating fashion in which Michigan took care of business in AT&T Stadium in Arlington, Texas. This was a butt-kicking. Michigan out-rushed Florida, 215-11, turning a 17-13 halftime deficit to a 16-point victory en route to notching 433 yards.

Harbaugh is looking for a breakthrough. And perhaps it will happen this year. Michigan has won 10 games in each of his first two seasons back at his alma mater. But the Wolverines have finished no higher than third in the Big Ten East. Even worse: Harbaugh is 0-2 vs. Ohio State.

This storied program is eager to return to the summit of the sport. Elite status has been elusive for over 10 years now, ever since Lloyd Carr left after the 2007 season. Michigan went outside the box-WAY outside the box-when hiring Rich Rodriguez. The move will go down as one of the worst mismatches between coach and school in college football history. Rich Rod went 15-22 overall and 6-18 in the Big Ten before this marriage mercifully was ended.

The school thought it had a ?Michigan Man? when it tabbed Brady Hoke after the disastrous Rodriguez era. But Hoke was just a de facto Michigan Man. Yes, he was a former Wolverine assistant. But he wasn?t an alum. But more importantly, he failed to elevate the program, going 31-20 overall and 18-14 in the Big Ten. Hoke?s record got worse each season, bottoming with a 5-7 mark in 2014.

In Harbaugh, Michigan appears to have struck gold. But, again, the big payoff has yet to be made. The Wolverines still haven?t won the Big Ten since the 2004 season, a 12-year-and-counting drought. The only longer dry spell was from 1950-64. Today was a nice opening step to what could be a special season. Ty Isaac led the squad with 11 carries for 114 yards rushing. That helped Michigan overcome some uneven play from its quarterbacks, who hit just 12-of-26 passes for 218 yards with one TD and two picks. No doubt, the Wolverines will need better play from their signal-callers down the road. Still, there was a lot to like about today?s win.

Pressure? It isn?t huge this season in Ann Arbor. Most feel Michigan will finish third-again. The program had a national-high 11 players picked in the 2017 NFL draft. The defense was especially hard hit, losing first-rounders in Jabrill Peppers and Taco Charlton. There is plenty of talent still on hand for Michigan, including the likes of defensive end Rashan Gary, viper Khaleke Hudson, running back Chris Evans, wideout Donovan People-Jones and linebacker Devin Bush, among others. But it is young talent. And is that young talent enough to overtake a loaded Ohio State team and defending Big Ten champion Penn State in the East ?

Perhaps. It will be fun to watch this team develop.

IT'S GREAT TO BE A MICHIGAN WOLVERINE!!!! #GoBlue #GoMaize pic.twitter.com/bet74jlI3y