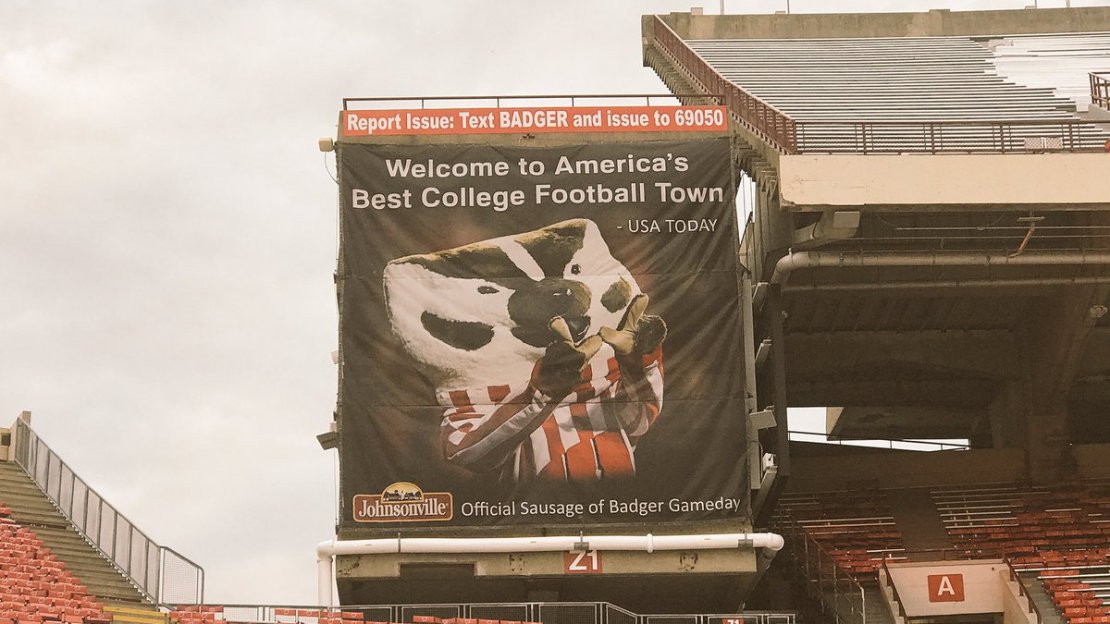 After 20 days, roughly 3,700 miles, 14 practices and two pairs of lost sunglasses, it's official: The 2017 Big Ten Network football bus tour is over.

Here is a look back at the Best of the Tour.

MY TRIP BY THE NUMBERS

19, KIND granola bars consumed
13, cans of Red Bull. Sugar-free, of course
1, mesh CAT trucker hat bought at a Pilot Flying J Travel Center somewhere along a lonely stretch of highway
13, bags of mini pretzels noshed
7, times Howard Griffith made fun of my teal (aqua?) suitcase
1, game of Risk I didn't take part in
21, bottles of Dasani water chugged
54, times hearing Gerry DiNardo's booming voice in the back of the bus discussing the Maryland-Texas game
0, vegetables eaten
2, times I did laundry
56, minutes stuck on a detour around a bad wreck on I-80 in Pennsylvania

Penn State. There can't be a better intersection than Allen and College in State College. It feels like a movie set. Make sure you stroll by Old Main when you cross College Avenue onto the bucolic campus. You'll feel smarter.

Wisconsin. Lake Mendota ? Lake Monona ? the capitol building ? State Street ? Camp Randall Stadium ? cheese curds ? Barry Alvarez's sweater vest and shades ? I could go on, but you it get: Madison has it all.

Indiana. The meandering trails through campus make it feel like you are lost in a forest ? only to emerge onto the limestone beauty of this post-card perfect institution. Inhale. Exhale. Your IQ just went up eight points.

Michigan. Ann Arbor is one of the hidden gem cities in America. Between Main Street and State Street, this burg is the ultimate in quaint coolness. It has the feel of a "big little city" with an eclectic mix of restaurants to make even a denizen of Chicago smile, nod and give a thumbs up.

Northwestern. You can almost feel the brains pulsating when you walk across this gothic campus. When checking out the walking path along Lake Michigan, cast your eyes south toward the Chicago skyline. This is what those in the biz call a "money shot."

Are you kidding me with this view? These new Northwestern facilities were done right: pic.twitter.com/7x0JGtM3VK

Leo's Coney, Michigan. Since 1972, this place has been serving up to-die-for Coney dogs on steamed buns with chili, mustard and onions. Just a buck-ninety, too. If you like diners, you'll love this place. Wear your favorite sweat pants so you can eat three Coney dogs and not feel full.

The gyro omelette at @LeosConeyMI will change your life. pic.twitter.com/5OgrTMYsXg

The Trojan Horse, Indiana. Located right on the town square in Bloomington on Kirkwood Avenue, this IU institution serves up a gyro that would bring Zeus to his knees. You'll wanna wash your hair with the Tzatziki sauce.

Honest Abe's, Nebraska. The place bills itself as being about "Burgers and Freedom." Who can be against that? Not me. I ordered something modestly billed as the "greatest burger ever" that had applewood bacon, grilled onions, cheese, romaine and something called "awesome sauce." This is a messy endeavour, so take off your stove pipe hat while eating.

Bruno's Swiss Inn, Purdue. We had some of this uniquely sliced (it comes in strips) and oh-so-good pizza delivered to the BTN cruiser. Fabulous. Bruno's has been making Purdue students fat and happy since 1955. Owner Orlando Itin (The Big O) has turned the restaurant into a de facto Purdue sports hall of fame. How happening is this place? Drew Brees hangs out when he swings through West Lafayette.

Maryland OTs Damian Prince and Derwin Gray. Standing between a combined 623 pounds of sweaty humanity, I felt like a puny man. But the Titanic Terrapin offensive tackles were big teddy bears and had a lot of fun. Heck, they even danced.

Iowa LB Bo Bower. He was a hit in more ways than one, showing us his considerable tackling skills and ease while on camera. Plus, he became one of my favorite Big Ten players the moment he took off his helmet and I saw that hairline. Let's call him "Old Man Hawkeye."

Northwestern's Justin Jackson and Garrett Dickerson. Jackson showed us his "jelly jump" into the end zone. Dickerson did him one better by imitating the move and then jamming a football over the cross bar. Just two Big Ten stars having fun.

Minnesota DT Steven Richardson. He's a walking wedge, seemingly as wide as he is tall. The 6-0, 300-pound Gopher is the personification of a human fire hydrant. Unblockable. He should be a comic book super hero.

Nebraska OT David Knevel. At 6-9, 315 pounds, let's call him the "human eclipse." Perfect, right? But no need to wear your special glasses while watching him block.

Purdue DT Gelen Robinson. The 6-1, 280-pound son of Boilermaker hoop legend Glenn "Big Dog" Robinson (they both wear No. 13) was gonna show us how he dunks but was afraid he had lost some of his hops. Instead, Robinson benched 315 pounds multiple times AFTER practice for us. Could Pops do that?

I'll admit it: I'm a sucker for the "Cars" movies. So, when Tow Mater himself-Larry The Cable Guy–was at the Nebraska practice, I lost it like a 15-year-old at a One Direction concert. Three words: Git. Er. Done.

Jim Harbaugh provided a Norman Rockwell-type moment when before practice he was with his wife who had Baby Harbaugh in a pumpkin seat. Who says you can't combine family and football?

Have to admit, I was surprised to have Penn State's Trace McSorley and Saquon Barkley sing "Happy Birthday" to me while delivering a cake. This was almost as good as getting that G.I. Joe with the Kung Fu grip on my 8th birthday.

Ohio State. The Buckeyes look spectacular each season. Few teams in the nation can match their size, speed and depth. Even the managers looked good.

Nebraska. Where's the beef? Where else? Lincoln, silly. Even Clara Peller would be stupefied. (Nice '80s reference, huh?)

Wisconsin. If you had all of the Big Ten teams on one giant bus, the first team I would want off is Wisconsin. I'd hate to see the destruction this squad could do to a Golden Corral buffet. The meat loaf and mashed potatoes have no chance.

Iowa. I have been on six BTN bus tours. And the Hawkeyes never fail to have the most physical practices. Better button your chinstrap while watching.

First practice we've been to where the coach is leading it through the loudspeaker. And this gauntlet drill had everyone hyped: pic.twitter.com/4g4LFZSiB1

Penn State. C'mon, anywhere James Franklin is, it's the place to be. The guy has to have espresso running through his veins. Hook me up to that IV.

Tim Polasek, Iowa OL. He is in just his first season in Iowa City. But Polasek is a fire-breathing veteran who fits right in. Maybe he is a long, lost son of Kirk Ferentz. If your feelings get hurt easily, don't play for this guy.

Kerry Coombs, Ohio State CB. Don't be fooled by his small stature. The guy's bark is as big as his bite. Pure TNT. You've been warned.

Bob Diaco, Nebraska DC. He has a body (and hair) of steel. And just watch Diaco zip, zag and jag across a practice field, hip-bumping players. I want what he has–especially the hair.

Jeff Brohm, Purdue. Oh. My. Gosh. If the Boilermakers struggle this season, it won't be because Brohm didn't spill his guts on the practice field, coaching, cajoling and often-ahem-"encouraging" players to play better.

Luke Butkus, Illinois OL. He certainly does the family name proud with his hair-on-fire style. Heck, I bet Butkus' uncle, Dick, is afraid of Luke, who got so fed up with one lineman late in practice he told him to "GET OFF THE FIELD!!!!!!" The kid got off the field ? quickly.