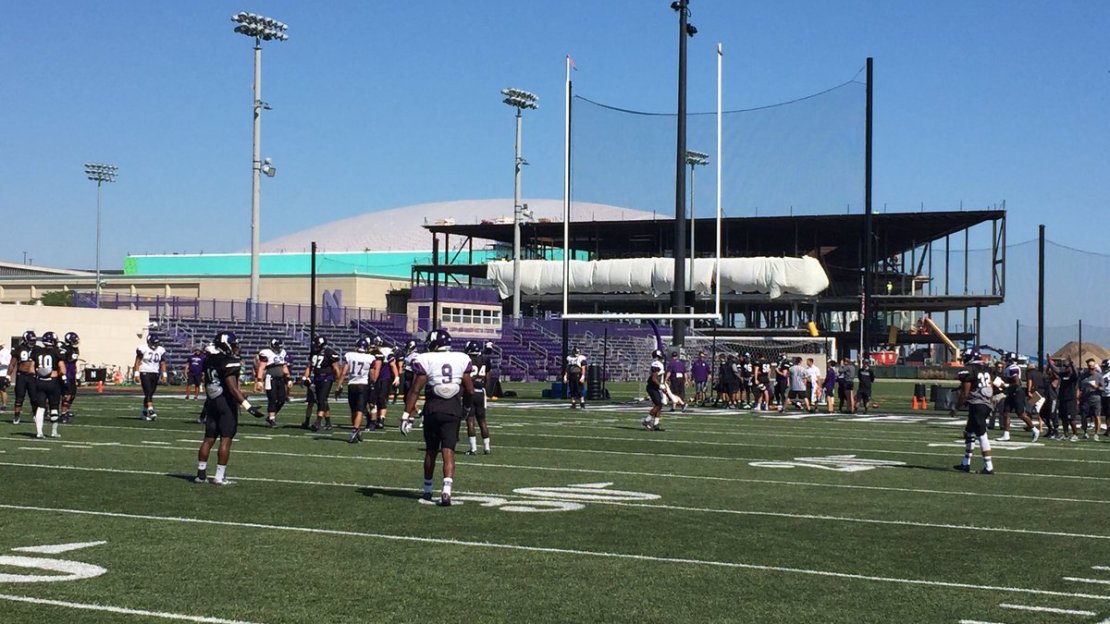 EVANSTON, Ill. — Pat Fitzgerald has a well-oiled machine that has a shot to contend for the Big Ten West title. Adding to the buzz: This could be his fastest team yet, but keep an eye on the offensive line. Is it championship-caliber? And is there a new big-time WR?

Here are five things I learned at Wildcat practice.

1. Northwestern needs some wideouts to step up. Remember, a season ago no one was talking about eventual Big Ten receiver of the year Austin Carr. The staff has some good options. I like Oregon transfer Jalen Brown, who is a nice athlete and one of the fastest wideouts. He made some nice plays today. Flynn Nagel is a savvy veteran who will play a significant role along with Charlie Fessler. Macan Wilson is another vet to watch but he was out today. I also like young Bennett Skowronek, a 6-4, 200-pounder who made some good catches. The fastest wideout? OC Mick McCall told me it is Jelani Roberts. And keep an eye on three true freshmen: Jace James, Berkeley Holman and Kyric McGowan. There also is superback Garrett Dickerson, who is one of the Big Ten's most underrated players.

Could Bennett Skowronek be the new go-to WR for @NUFBFamily? He is a rangy target. pic.twitter.com/9R3S9ccbE2

2. QB Clayton Thorson is looking good. He made some big improvement from 2015 to 2016 thanks to some changes in his mechanics. Now, can he keep developing? Thorson throws a sharp ball and stands tall in the pocket. He could develop into one of the top signal-callers in the Big Ten. He lacks mobility and needs better accuracy on his throws down field. OC Mick McCall told me before practice that Thorson has really become a good leader.

Stop 14 – Northwestern. New facility going up in the background is massive. Sat in on QB mtgs this morning – really engaged group pic.twitter.com/bppTSyPSrK

3. This secondary is the best part of the defense. There are few safeties better than Godwin Igwebuike, who is a hard hitter in the back end. He also has an underrated ability to cover. He teams with Kyle Queiro, who mans the other safety slot. Montre Hartage and Keith Watkins are the corners. DB coach Jerry Brown told me Hartage is the top cover man. Just watching him, you can tell he likes the game. Marcus McShepard is the No. 3 corner. It will be nice when Trae Williams returns this fall from an Achilles injury.

CB Keith Watkins is part of a @NUFBFamily secondary that is the strength of the defense. pic.twitter.com/9OxoPhYDjM

4. The defensive line has nice potential. Joe Gaziano is a solid end who is stout vs. the run. Trent Goens and Fred Wyatt are on the other side. Inside, Jordan Thompson and Tyler Lancaster are veterans who are strong. Yes, they lack cutting-edge athletic ability, but their blue-collar work ethic pays off in production. Lancaster is a huge man at 6-4, 315. Keep an eye on true freshman Samdup Miller. He is gonna be good. Brother Alex is good, too. And it will be fun to watch true freshman Earnest Brown develop. He was a mega-recruit.

5. I like the LBs a lot. "The Franchise," aka Anthony Walker Jr. may be in the NFL, but there is a lot of talent here. Keep an eye on Brett Walsh. And Paddy Fisher is one of the Big Ten's bigger linebackers. Ex-running back Warren Long looks like a natural, while Nate Hall could be the best of this emerging bunch.

Even without Anthony Walker, @NUFBFamily has a nice collection of LBs. I really like Brett Walsh. pic.twitter.com/xYVnyDR5bO