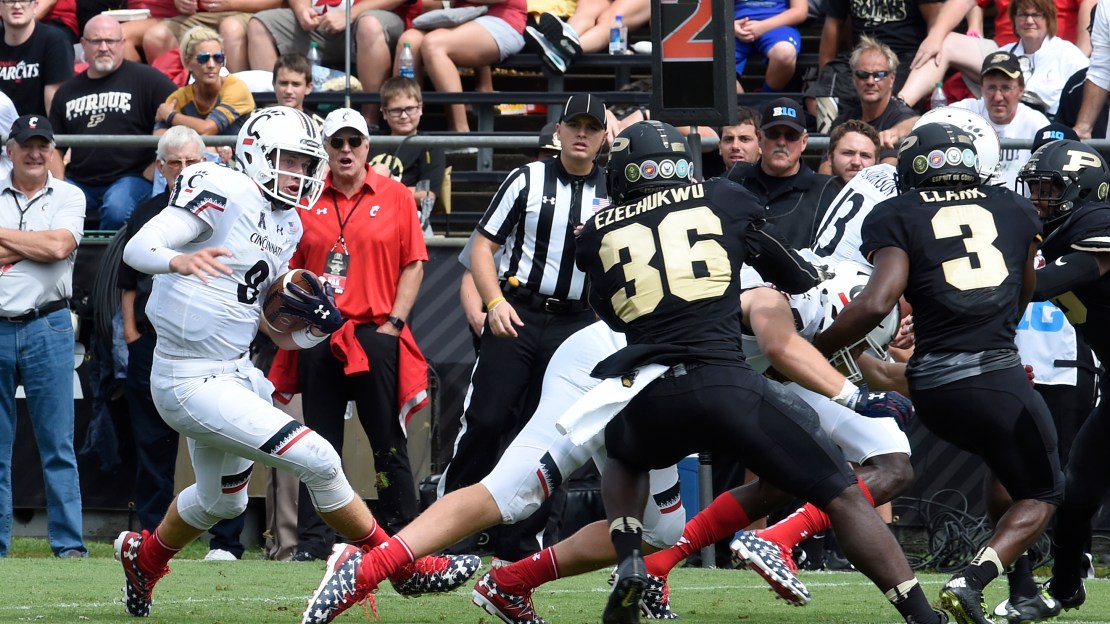 WEST LAFAYETTE, Ind. — Jeff Brohm is looking to flip what has been a losing script at Purdue. And, he has many challenges. No doubt, Brohm and his staff won't be outworked, as he has installed a dynamic offense.

The bad news: The offense has been inconsistent in camp. And a recent injury to the throwing shoulder of QB David Blough is a new concern as he battles Elijah Sindelar for the job. (Blough didn't practice today due to a class conflict.) The good news: The defense has looked good. But depth overall remains a grave concern.

Here are five things I learned at Boilermaker practice.

1. The offensive line has a lot to prove. The staff has done a nice job upgrading the talent in a short period time, to the point where there are seven-eight linemen that coaches feel comfortable playing. The arrival of grad transfers Dave Steinmetz (Rhode Island) and Shane Evans (Northern Illinois) has been key. Each figures to start, with Steinmetz at right tackle and Evans at right guard. At 6-8 Steinmetz is a giant. Matt McCann has flipped inside to guard from tackle, which is a better fit. (He wasn't at practice due to a class.) I like redshirt freshman left tackle Grant Hermanns, who is a big key to this unit. He could develop into a nice player. Kirk Barron is a leader (he's a captain) and an anchor at center. (He missed today with a class conflict.)

2. The wideout unit has a lot of moving parts, and much to prove. Senior Gregory Phillips is taking a lead role as a team captain and wants to excel. Anthony Mahoungou is a big target with experience. But neither figures to be a difference-maker. Redshirt freshman Jackson Anthrop just catches the ball; he will have a role. Corey Holmes is a grad transfer from Notre Dame who may be the fastest of the bunch but has a lot to learn, and he has had a hamstring issue. In the end, don't be shocked if JC transfers Isaac Zico and Terry Wright end up being the top receivers. And keep an eye on true freshman KeyRon Catlett, who has impressed. He will play.

3. The defense will be the strength of the squad. And the best part of that unit is the linebackers. Ja'Whaun Bentley is back and healthy for his senior season. The staff will let him play downhill. At 260, he is a load. Markus Bailey is a rising star who moves all over the field. Love him. What an athlete. He will be a future All-Big Ten guy. Gotta like Western Kentucky grad transfer T.J. McCollum, a strong veteran who knows the defense of new coordinator Nick Holt. Danny Ezechukwu has moved from linebacker to "Leo," a hybrid linebacker/defensive end.

4. The secondary is a worrisome spot. JC transfer T.J. Jallow is a sure thing at safety. He is a physical player who needs to improve in coverage. He had a big hit today. You wonder if he could have issues with targeting penalties. What a hitter. Walk-on Jacob Thieneman has been a revelation at free safety. What he lacks in athletic ability he compensates for in smarts and hustle. Navon Mosley is another factor at safety. At cornerback, Da'Wan Hunte is a senior who has played a lot. He lacks size but is tough and quick. He is solid but missed today with a class conflict. Josh Okonye is a grad transfer from Wake Forest who will help right now-at least he better-at corner opposite Hunte. Players like Kamal Hardy, Antonio Blackmon and Josh Hayes need to develop.

Purdue has done a nice job of plugging some obvious holes with transfers. Will be more competitive

5. There is a lot of depth and quality at running back. This is the best position on the offense. Markell Jones is probably the most talented but was slowed by injury in the spring and has had to prove himself to the staff. He endured a sophomore slump in 2016. I like diminutive D.J. Knox. He missed 2016 with a knee injury but is a dynamic and shifty ballcarrier with toughness. Richie Worship is a 260-pound beast who will excel in short yardage, while Tario Fuller has athletic ability and speed. He is underrated, as is Brian Lankford-Johnson. Keep an eye on Fuller, who had some nice carries today. So many options. The competition will be good.

RBs are a strong point of @BoilerFootball. I like D.J. Knox, who is coming off injury. Explosive and quick. pic.twitter.com/2RTm9t8lJk