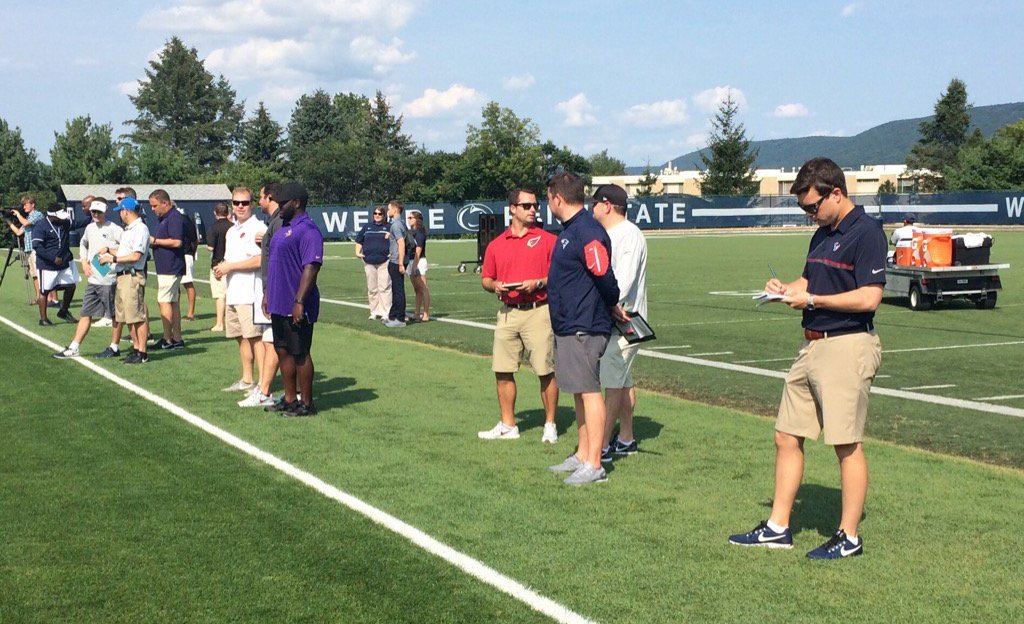 STATE COLLEGE, Pa. — Penn State is riding big expectations this season coming off an unexpected Big Ten title. And, there is a lot to like about the 2017 Nittany Lions.

Here are some fun takes from a practice we watched Wednesday on a sun-splashed day.

Top specimen: DE Shareef Miller. The 6-5, 255-pound sophomore is imposing coming off the edge. He has the size to envelope foes and speed to spring past him. He could be the next star pass rusher in State College.

Loudest coach: DL Sean Spencer. He really enjoys his job. Just watch him. Spencer is intense. But he also knows how to have some fun. And he is always coaching, teaching and cajoling his troops.

Impressive newcomer: CB Lamont Wade. He was a five-star recruit and arrived in time for spring drills. What he lacks in size (5-9) he makes up with speed, quickness and savvy that belies his true freshman status.

On the rise: WR Juwan Johnson. Yes, Penn State lost Chris Godwin to the NFL. But there is no shortage of talent. And Johnson, a sophomore, is looking VERY good. The 6-4, 227-pound target made some nice catches today.

Have liked Juwan Johnson from the first time we saw him a few years ago – feel like he's poised for a big year pic.twitter.com/TjaFROEBtN

Nagging question: Who will rush the passer?

Under the radar: LB Koa Farmer. This is Linebacker U, so let?s go with Farmer. He is a converted safety who has grown into the position. He has speed and size on the outside. Keep an eye on him.

Former Nittany Lion LB Jack Ham was on hand to watch practice along with PSU announcer Steve Jones. Ham likes this team. I asked him how he feels physically, and Ham said he is good. He looks like he could still play.

This was a fast-paced practice that involved little wasted motion. James Franklin does a good job of keeping things moving along. The energy is very high. And the music played on this stop was among the best, in my mind: Quiet Riot, AC/DC, Alice Cooper. Good stuff.

There were 11 NFL scouts on hand, more than any other stop so far on the tour.

I count 11 @NFL scouts at the @PennStateFball practice. Most yet on the BTN tour. pic.twitter.com/SNbwpzZiZ5