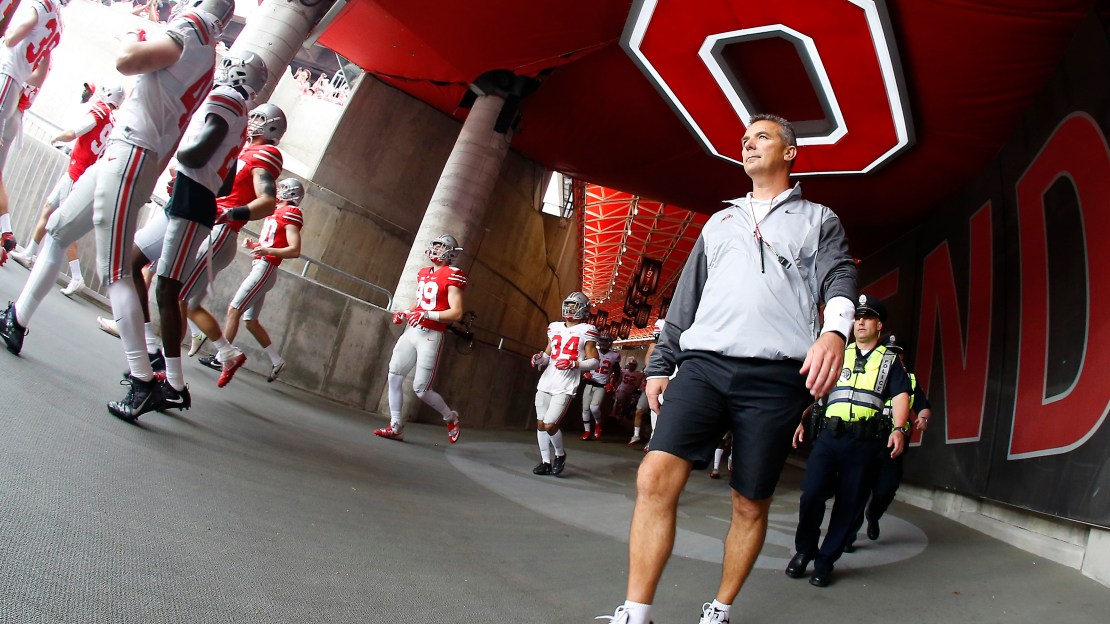 Most impressive player: Sam Hubbard. The defensive end is a load off the edge who often caused issues in drills. He looks ready for a big season on a loaded OSU defensive front.

Top specimen: DE Jalyn Holmes should be the first guy off the bus. He looks even bigger than his listed 6-5, 270 pounds. And he?s very quick, too.

Loudest coach: This is tie between cornerbacks coach Kerry Coombs and offensive line coach Greg Studwara. Each would make a drill sergeant blush with their volume and voracity. Lots of bulging veins in the forehead and neck.

Impressive newcomer: RB J.K. Dobbins was the first freshman to get his stripe removed from his helmet signifying they are Buckeyes. While Mike Weber is the No. 1 back, Dobbins should carve a niche this fall. Dobbins ran with the first team often today.

On the rise: Keep an eye on WR Binjimen Victor. The 6-4 sophomore is a rangy target who got separation a few times today. And he made on fabulous catch on one occasion. Maybe he can become a true stud No. 1 option.

No @OhioStateFB WR is more intriguing than Binjimen Victor, a tall drink of water at 6-4. pic.twitter.com/zgmOz7qYFQ

Nagging question: Will the offensive line develop? The right side has some questions and needs to solidify.

Under the radar: Sophomore corner Damon Arnette is a thick coverman who could carve out a big niche in a rebuilt secondary.

Number: 28, sacks allowed by Ohio State last year, which ranked seventh in the Big Ten. The line must tighten.

Ex-Buckeye great and Pro Football Hall of Fame wideout Cris Carter watched practice. He told me afterward that he?s a good friend of Urban Meyer. He also likes the wideouts, mentioning Binjimen Victor and Johnnie Dixon. Carter also was impressed by d-line. And he likes CB Damon Arnette, ?a south Florida kid,? which is where Carter lives.

Halfway through practice, a voice over a P.A. announced it was ?Team Up North Period.? The players hooted and hollered.

Scouts from the Rams, Jets and Bills were on hand.

With Kevin Wilson running the offense, look for a quicker pace, a la the Tom Herman era.

In the world of Big Ten off-season changes, this might be the most intriguing one – Kevin Wilson running the offense in Columbus pic.twitter.com/YpIsqrqJNX

It was fun to watch true freshman QB Tate Martell. He is only 5-11, but he is very quick. He scored on a long TD at one point in a full-contact scrimmage. He is electric.